The Art of Freedom: The Life and Climbs of Voytek Kurtyka 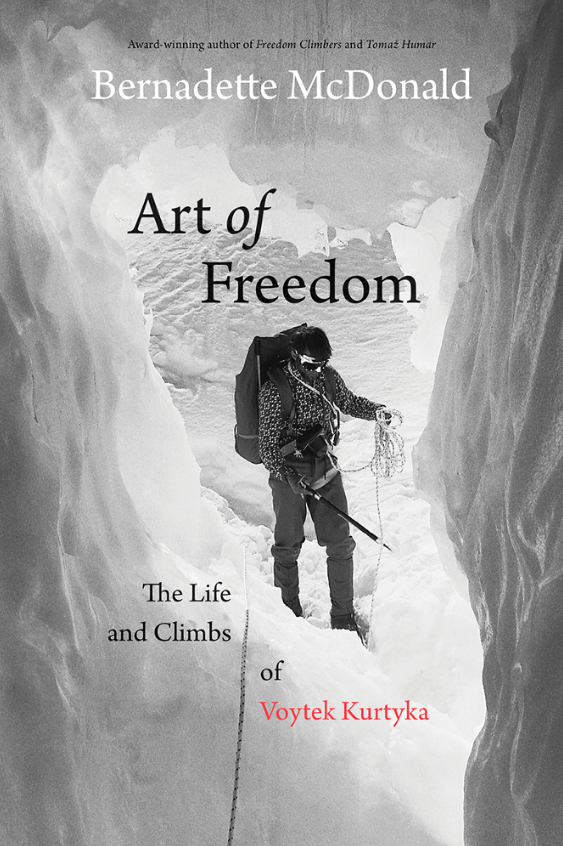 I can’t stand it. Reviewing another dumb climber/hero worship story about rising above oneself in search of: meaning, a higher calling, aesthetics, purity of line, boldness, creativity, loss and redemption, blah, blah, blah. The human tale and so damn predictable. Please let this be different. I can’t hate this book! It’s Bernadette McDonald’s work—Bernadette, the patron saint of Dead Poles—and this biography is about the most influential alpinist of the last 50 years: Voytek Kurtyka! The Mick Jagger-est cat who envisioned and executed the greatest alpine climb of all time (so far), the Shining Wall on Gasherbrum IV. I am in deep trouble. Trapped between a most certain social death if I say what I expect I will have to say and the self-loathing that awaits if I sell out.

Just put your head down, Charlie, and return to the predictable drivel. Bad rock: check. Winter conditions: check. Cheating to get what you want: check. Oppressive government: check. Parents don’t get it: check. But...wait a minute. Slowly, the man emerges and somewhere in the middle of the book I forget my prejudices and am swept up in the story of Voytek. McDonald’s skillful storytelling somehow sneakily transforms from her voice to Voytek’s and it’s very effective.

Perhaps it is natural that there is little reflection of Voytek’s early life here because, like most of ours, it is unremarkable. But as soon as he tastes rock and begins to sense a greater world, he is driven to experience life through climbing exclusively on his own terms. Be they family, governments, peers, climbing clubs, religion, or relationships—Voytek rejects all authority. It’s only later, as a mature person, that he derives meaning through human relationships. The tenderness and understanding he expresses for his climbing partners Erhard Loretan, Krzysztof Zurek, and Jerzy Kukuczka offer palpable insights into the man (and into his partners as well).

As a climber and student of the natural world, what sets Voytek apart is the consistent sound decisions he makes in the most dire situations. Whether the genesis of this judgment is a developed intuition or a keen intellect is impossible to say, but what is revealed in McDonald’s work is that he is totally aware...all the time. One obvious consequence is that he and his partners manage to survive some very hard and deadly experiences. Reading between the lines of an epic on on Changabang, I can almost hear Voytek saying, “What did I just hear? What is this feeling? What is this doubt?” as Krzysztof Zurek, exhausted and spent, rationalizes setting a faulty belay with “I have a lot of pitons in. It’s good.” In response, Voytek refuses to move, and when Zurek climbs a few meters higher he falls, ripping the intended belay stance from the wall.

The Art of Freedom captures the full arc of a man’s life, from early arrogance and bravado to the carefully scripted nuance of being a mature and hopelessly flawed human. In the end, Berna- dette McDonald has treated us to the tale we all wanted to hear, ever since Kurtyka and Robert Schauer walked out from under the Shining Wall. This is story worth keeping close to your heart.