Between October 2016 and May 2017, I made the likely first ascents of eight distinct formations in Zion.

In late October, Courtney Purcell and I did the first known ascent of a formation we named Lucky Charm. The peak sits to the immediate northwest of Sneak Peak, sandwiched between the two “sneak” routes, alternate starts to the classic Imlay canyoneering route. Our route starts on the north side. Where climbing the north ridge ceases to be practical, we climbed a chimney/hand-crack to gain the west face.

From October 13–15, I did the first known ascent of a formation that sits between the Gunsight start to Heaps Canyon and the canyon itself, immediately west of Castle Dome. From the standard rappel into Phantom Valley, the start is reached by traversing east towards the northwest corner of the formation. 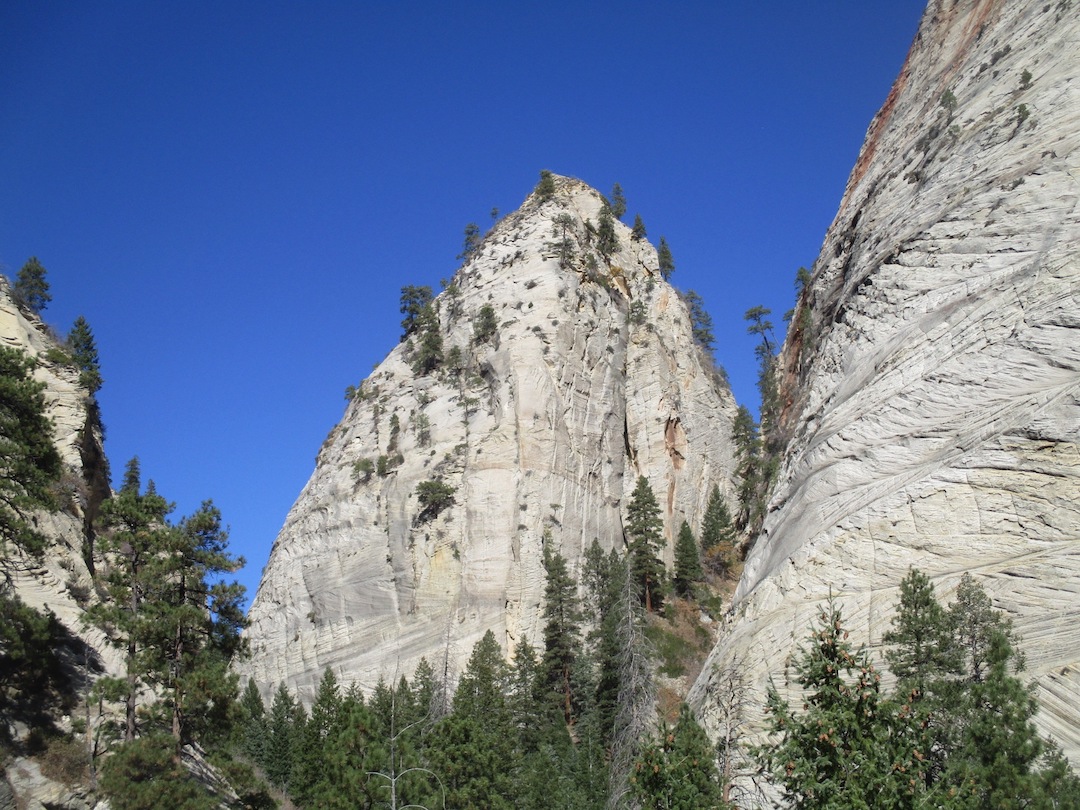 My route starts by climbing a chute on the middle of the west face at 5.7. After gaining the ridge-like section, I face climbed the south buttress. Careful route finding is required to prevent the climbing grade from escalating into something much more difficult.

In March, I explored for routes on two formations that had not been climbed before between the Inclined Temple and Church Mesa, which I named the King and Queen.

I descended the canyon on the north side of the Bishoprics. On the east side of the Queen, the one with a canyon between it and Church Mesa, I found an unlikely, steep, sandy, loose chute that led to the summit of the Queen. I’m not sure how difficult the route is. I can scramble 5.7 with a pack and hiking boots on.

The shortest way to the summit of The King appeared to be to climb up to the saddle between the King and the Sanctuary and then up the southwest corner of the King. Where I could get protection it was sparse; the rock was wet sand cake.

The two-pitch route starts below the saddle in a chimney and climbs to a cave where a roof must be turned. At the lip of the roof was a groove flowing with water from snowmelt. I handjammed into the cold running water. It was a warm day but I was shivering, soaking to the bone through my rain gear. I would guess it to be 5.9 in dry conditions, possibly 5.10. The episode made me sick. Back home I spent two weeks in bed on antibiotics. 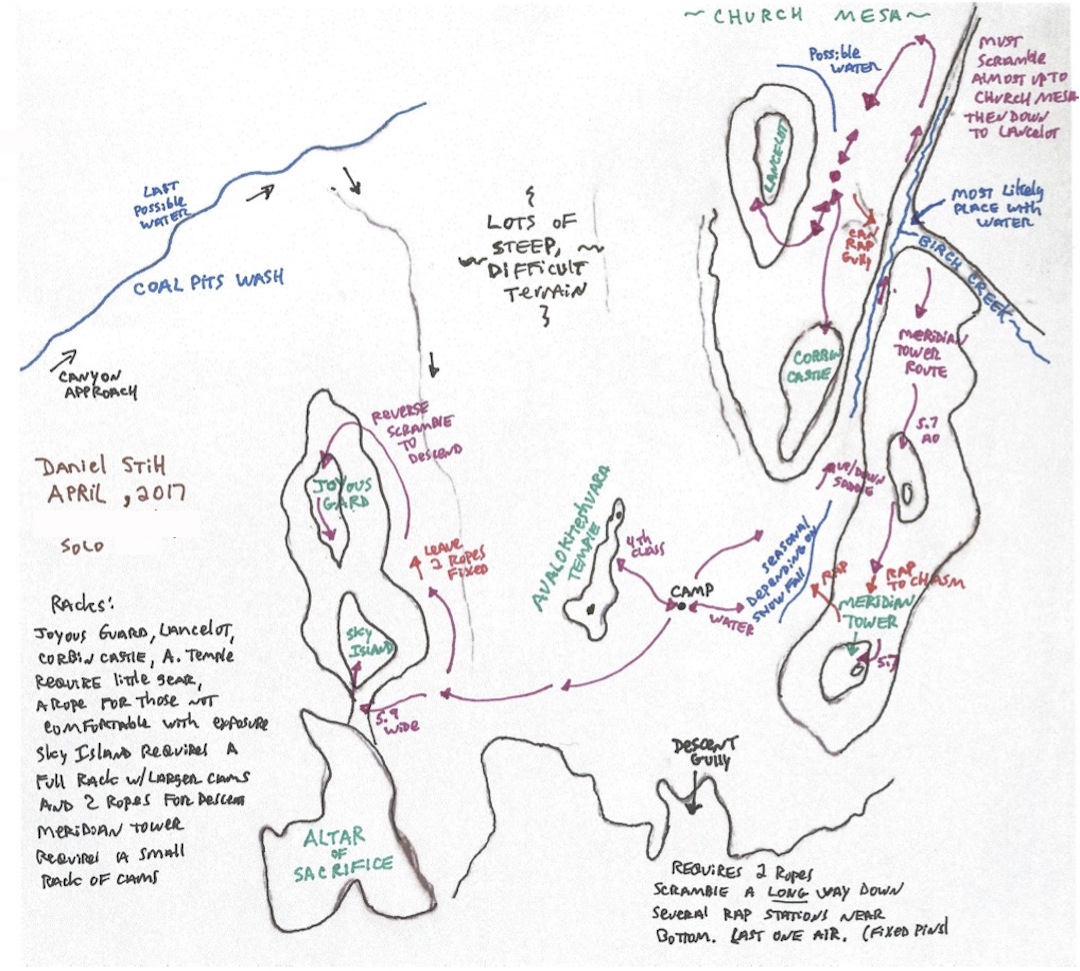 In April, I did a traverse of the Sanctuary, the King and Queen. I started by climbing Rat Salad (1,000’, III 5.7 R, French-Littman) on the Sanctuary. I soloed to where there’s supposed to be a fixed pin and 5.7. I couldn’t find the pin. I traversed across a ledge until things started to look too steep for 5.7, then I backtracked and picked the easiest way, which was easy until to the last 200 feet. Near the top I jogged left and found it rather difficult 5.9 face in rock shoes. After the 5.9 I put the rope in my pack and scrambled to the top.

I traversed the edge of the Sanctuary and then downclimbed and rappelled to the saddle that connects the Sanctuary to the King. At the King, I traversed the south edge towards the Queen and downclimbed to the saddle between the King and Queen then climbed the Queen. Instead of descending the Queen via the route I took on the first ascent (the east face) I rappelled back to the saddle between the King and Queen and rappelled into the gully on the east side of the saddle. I scrambled the gully down to the canyon next to Church Mesa then hiked back to my starting point.

In April I did the first known ascent of a peak near the Towers of the Virgin I named Lancelot due to its color, prominence and the way it stands tall and majestic. I climbed the SE corner, traversing west towards the top. The crux, near the top, is thin white face with lots of exposure on very loose rock.

I also did the first known ascent of a peak northwest of the Meridian Tower, accessed from contouring around to the base of Lancelot. I climbed a 5.8 hand and fist crack to get onto the north ridge. The crux was not the grade but loose rock. Up higher the ridge narrows to less than two feet and turns rotten.