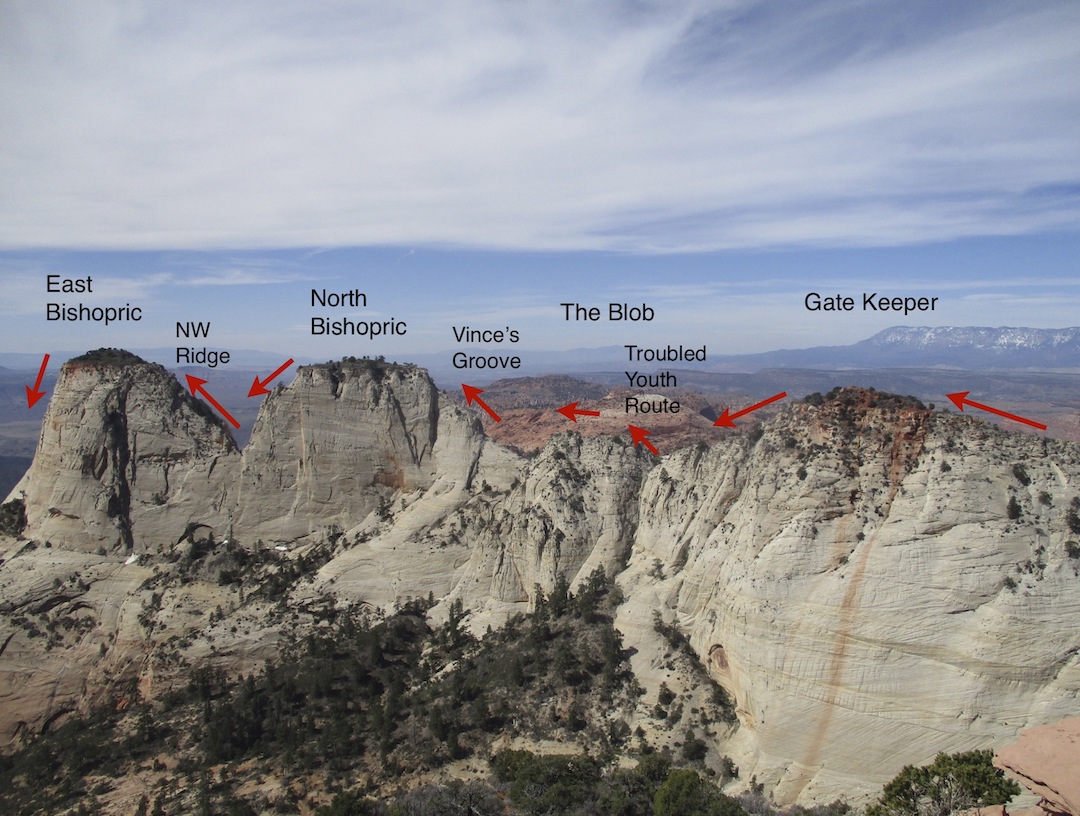 From October 2016 through April 2017, I drove 11,000 miles and spent eight outings in the Zion backcountry attempting, by various routes, the North Bishopric. Along the way I made the first known ascents of a number of nearby summits and formations.

My first attempt was in October. I approached the Bishopric massif carrying a large rack, bivy gear and a single 8mm rope. I attempted to climb the peak’s west face, but found it too steep and unprotected to free climb. I walked around and scouted an aid line on the east face, but did not attempt it since I only had one thin rope. During my recon, I made the likely first ascent of the northwest ridge of East Bishopric in an attempt to get a higher view of my proposed aid route.

I then attempted to climb the North Bishopric via the long and winding ridge to its north. I did the first ascent of the first peak along this ridge, which I named the Gate Keeper. My objective was to continue along the ridge to the Bishopric but I found it too dangerous to continue alone.

In November I returned with my nephew, Nathaniel Stih, who, at only seventeen, had never climbed or rappelled before. I dug out some old gear to provide him with essentials—sleeping bag, harness, helmet. He saw an ice axe and insisted on taking it. Has anyone ever carried an ice axe all the way up the West Rim Trail and down into Phantom Valley to the Bishoprics?

In December 2016, I attempted to climb the aid route on the east face. I packed enough pins to do an El Cap big wall. Unfortunately, the weather had changed, and I was hampered by snow and ice. Nighttime temps dipped to 10˚ F, the creek near camp was frozen inches thick and I had to employ my wall hammer to obtain drinking water. Nonetheless, I attempted the route. On the first pitch I placed two angle pitons that rang to the hilt, but pulled under body weight. I examined the caked dirt on the ends and found the sand to be damp. I bailed.

I returned twice later in the month. The first time I barely got out of the car due to the cold. I returned a week later when it was warmer, but there was more snow— you could have skied down Checkerboard Mesa. I bailed after a stint of postholing with a heavy haulbag.

I was back in March 2017, abandoning the idea of an aid line and instead focusing on the ridge. After a bivy atop the Gate Keeper, the next day I rappelled to the base of the Blob and climbed Troubled Youth. From the summit of the Blob, I walked across the ridge towards a potential crux that might keep me from the summit—Vince’s Groove, which I named after Vince Bert, a friend and El Cap big wall climber from the ‘90s who gave me his haul bag and aid rack, and has generously lent me gear over the years.

I felt confident I could climb the cracks in Vince’s Groove, but the face above it looked choosy and steep. I made it through, and at the top of Vince’s Groove I left the rope behind and finally scrambled to the summit of the North Bishopric. I descended back down the ridge and rappelled the line Nate and I had previously established.

In April, I returned to attempt a complete traverse of the three Bishoprics, solo in a day. I had by now climbed all the Bishoprics, but had not done the descent off the North Bishopric to get to the East Bishopric. Rappelling down the big vertical white face was intimidating but required to link the formations.