I SAT BENEATH a clear, calm sky sipping coffee. The warm beverage soothed my apprehension, which had been building through a long, restless night below the north face of Mt. Geikie. The Lowe-Hannibal Route—750m of beautiful quartzite topped by 450m of icy mixed ground—loomed above. My nerves began to ease as I sat on my pad watching the sun lift over the horizon. It was August 8. With such fine weather, I was soon more afraid of squandering a great opportunity with a premature retreat than I was of soloing the enormous face.

I packed my bag: two ropes, a light rack, a stove, an ice screw, an ice tool, crampons, an inflatable pad, a day’s food, and two days worth of coffee. I harnessed up and began the approach, eyes enthusiastically soaking up the details of the wall above. I roped up for the bergschrund—getting from the snow to the rock had some tense moments with sandy, loose insecurity. For the next few hundred feet, wearing rock shoes, I free-soloed sustained 5.8, with occasional sections of 5.10, up cracks, chimneys, and open face. The pack was on my back, and I tagged a rope behind me. Every so often I’d pull up the rope and pile it on a ledge. I hung on a couple of cams in this section for rests, but did not use any protection to aid in upward progress.

Eventually, about 500m off the deck, the buttress steepened and I decided to belay a couple of pitches. The first of these (5.11a, according to the guidebook, but felt more like 5.10c) I freed with a proper solo belay. At the second pitch, the route took an abrupt turn to the right. Here, I made a tension traverse off an old piton, which was followed by free climbing. This section took a considerable amount of time and effort. It was tense work to climb, reverse, and clean the gear. The rock on this part of the wall was of excellent quality: dark, purple, and with ample opportunities for good protection.

At the end of this traverse, I found myself on a large ledge and took off my harness for a rest. Taking stock of the terrain above, I began to doubt if I’d make the top before nightfall. I discovered water and happily sat and drank, soaking in the spectacular surroundings. I reached for my camera but discovered it was gone; the strap must have broken in one of the chimneys below.

The next section passed with less effort and brought an end to the real difficulties. I swapped back to boots and scrambled through a few hundred feet of sandy ledges strewn with running water and patches of snow.

At this point, the remaining daylight looked favorable, but I had already covered 900m and fatigue was building noticeably. I started to become concerned that I might make a weakness-induced mistake.

The Lowe-Hannibal continued above through a maze of rock and ice couloirs, but I took aim for a broad buttress to the left. Though this was unclimbed and unknown terrain, I could tell that it promised a tantalizingly dry rock passage to the summit. I didn’t get far before I came upon an amazing flat ledge, and the decision to spend the night there was easy. I ate the rest of my food and settled in for a sleepless night without a bag. Squats and jumping jacks helped keep the cold away.

I welcomed the morning sun with black coffee and rising spirits. The summit was only a couple of hundred meters away. The final pitches wove a convoluted path through an unnerving world of dubiously stacked blocks and wet patches. I climbed onto the summit and stood there for a brief moment, then immediately lay down in the hot morning sun and brewed what I would later discover, to my chagrin, was my last coffee packet.

I spent several tiring hours descending the west face through a mixture of rappels (about eight, mostly setting my own anchors), downclimbing, and scrambling down a ridge from the bottom of the west face back over to the north side. I breathed a sigh of relief as I walked down the final scree slope leading to the valley, its grass and water as welcoming as ever. As I walked away, I couldn’t help feeling like I had gotten away with something. Like I had prodded a great beast and slipped away unnoticed.

Editor’s note: The north face of Mt. Geikie (3,298m) is a wilderness wall, about 15 miles from the nearest road. McLane left the road (Highway 16, west of Jasper) in midafternoon on August 6 and returned to the highway around noon on August 10. The Lowe-Hannibal (George Lowe and Dean Hannibal, August 1979) was the second route up the north face of Geikie and is believed to have been repeated only a handful of times. The 1,200m route is graded ED2 5.11a; the route was free climbed in 2006 by Steve Holeczi and Mike Verwey, with crux pitches of 5.11a and 5.10c R. For his new variation, McLane diagonaled up and left to join the face’s original route near the top; this route was first climbed by John Hudson and Royal Robbins in 1967 (5.9 A3). 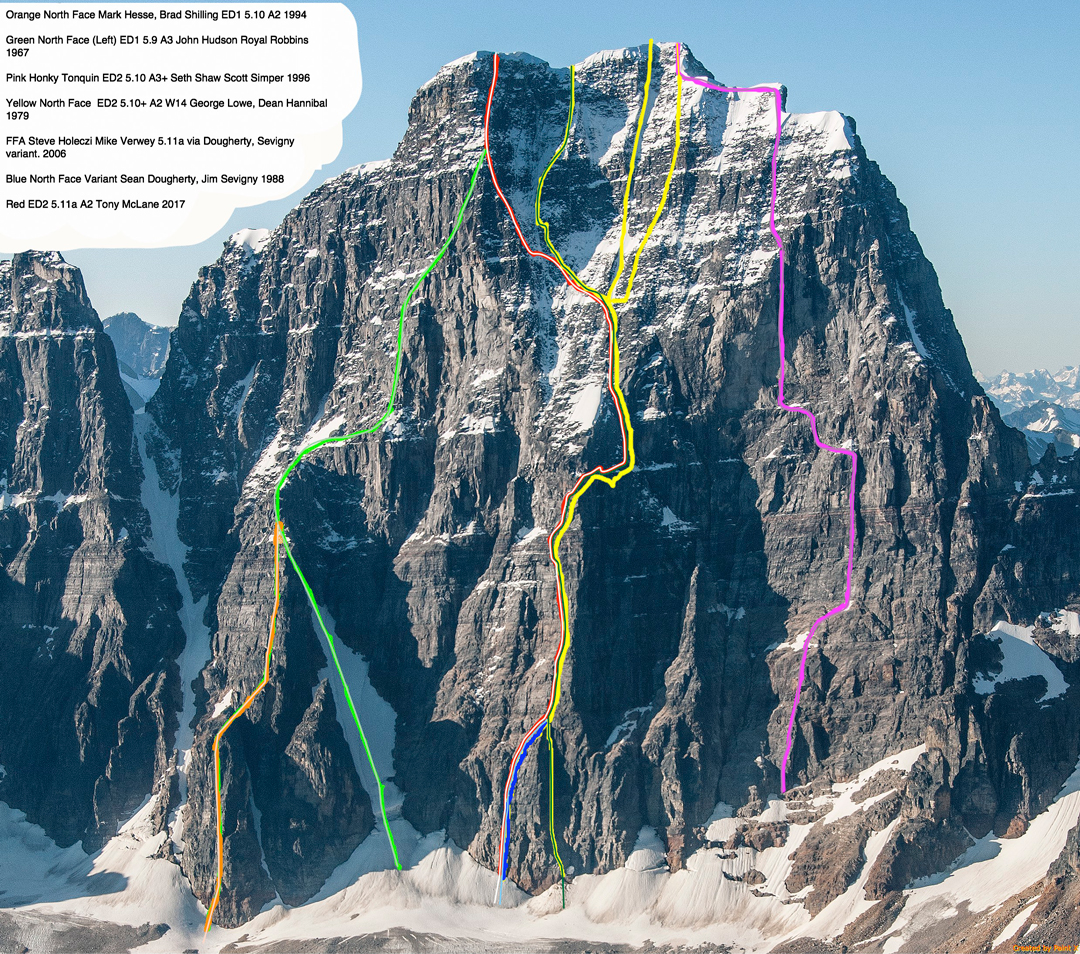