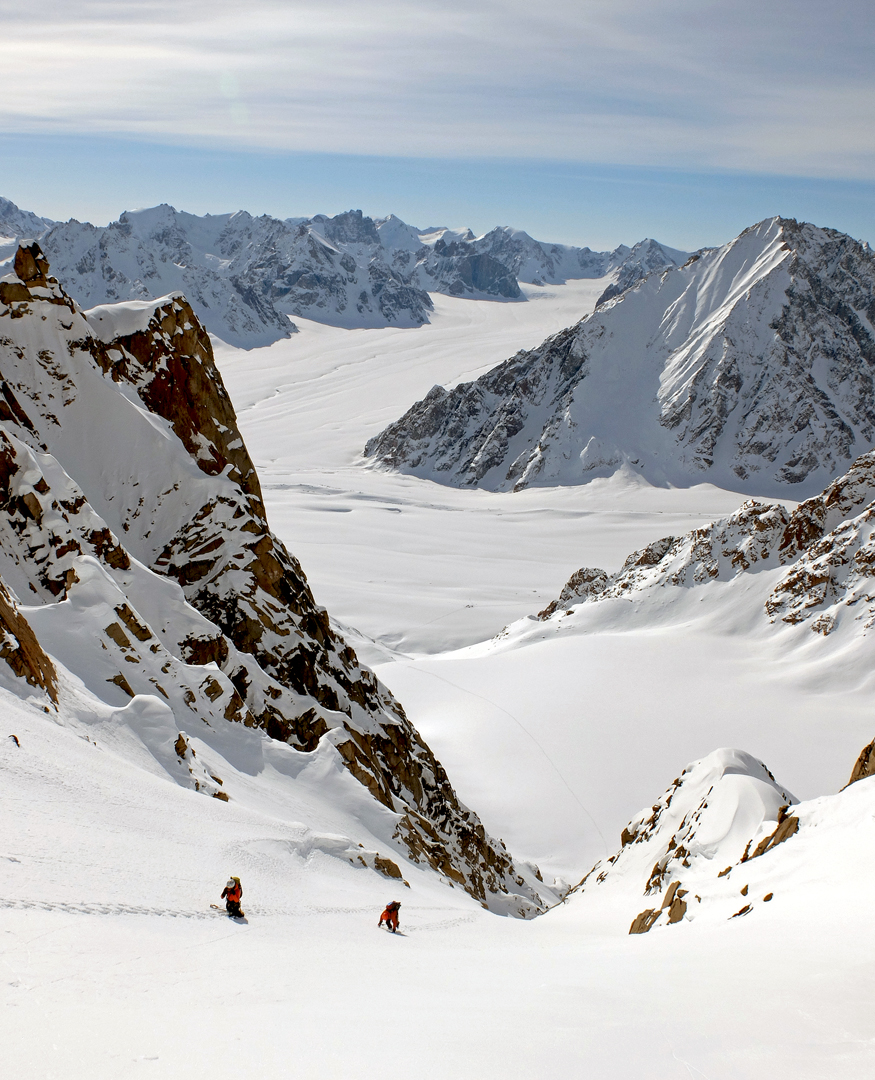 During April, Jesse Dufton, Alastair Everett, Oliver Mentz, Jennifer Roberts, and Molly Thompson (expedition leader) completed a self-supported expedition to the southern Stauning Alps. We aimed to rekindle the link between science and mountaineering, and had three objectives:

Research: to repeat glacial measurements taken during the 1970s and to install a network of ablation stakes in the Roslin Glacier to observe the impacts of climate change

Explore: to venture into unexplored areas and climb new peaks

Inspire: to show that the difficulties of disability can be overcome, and that, despite the additional challenges, adventures are still possible. Jesse Dufton suffers from rod-cone dystrophy, a genetic disorder that has affected his eyes in a degenerative manner since birth. While it is very difficult to quantify his current level of sight, it is extremely poor (he is registered as blind/severely sight-impaired). His story, “can do” attitude, bravery, and determination to participate on an equal footing may inspire people to achieve amazing things.

On April 8 we were transported from Constable Pynt to the bottom of the Roslin Glacier by snowmobile; from here, each member pulled a pulk containing team kit and scientific equipment. Once on the Roslin we established a network of ablation stakes, each placed at 150m to 200m elevation intervals, with additional stakes placed to replicate cross-glacier lines monitored during the 1970s. In addition to the stakes, which will be valuable for calculating the melt rate of the glacier surface, we collected snow pit data, including temperature and density measurements. We achieved all our scientific objectives while traveling up the glacier, installing 10 stakes, and successfully collecting snow temperature and density profiles from 12 snow pits. We aim to collaborate with future expeditions that return to the area and are interested in taking further measurements.

On April 17, near the northwest head of the Roslin, we turned left and over the next four days (with one day tent-bound due to poor weather) we crossed two steep cols to reach the upper Bjørnbo Glacier. Prior to leaving the U.K., knowing that several expeditions had climbed in this area, we had completed substantial research highlighting several target (unclimbed) peaks, mainly based on satellite images. Several of these peaks were located on the Bjørnbo Glacier.

We rested next day and then, on the 24th, made the first ascent of Boughfell (2,191m, 71°45'16.69"N, 25°4'46.35"W) from the southwest. This summit was the one we had identified back in the U.K. as our main mountaineering objective. It gave 1,100m of ascent (AD) and was more technically challenging than the previous peak. The route was named Katalice. The conditions on the day were again clear and sunny, with light winds and temperatures down to -19°C.

Moving farther down Bjørnbo Glacier, on the 26th we attempted a third summit, which we dubbed Peanut Peak. We reached the base of a large couloir on the southwestern flanks that we had expected to give a practical ascent of ca 900m. However, it was much warmer than on previous days and avalanches were releasing on the surrounding mountains. We decided to go no further. The summit is at approximately 71°42'51.6"N, 24°50'00.7"W, and from digital elevation models we estimate the height to be 1,777m. We were collected by skidoos from the bottom of the Bjørnbo Glacier on May 2.

A very comprehensive report, which gives more detail of the science, mountaineering, and much practical detail for future visiting parties, is available to download here. The team is grateful for the financial support it received from many grant organizations.