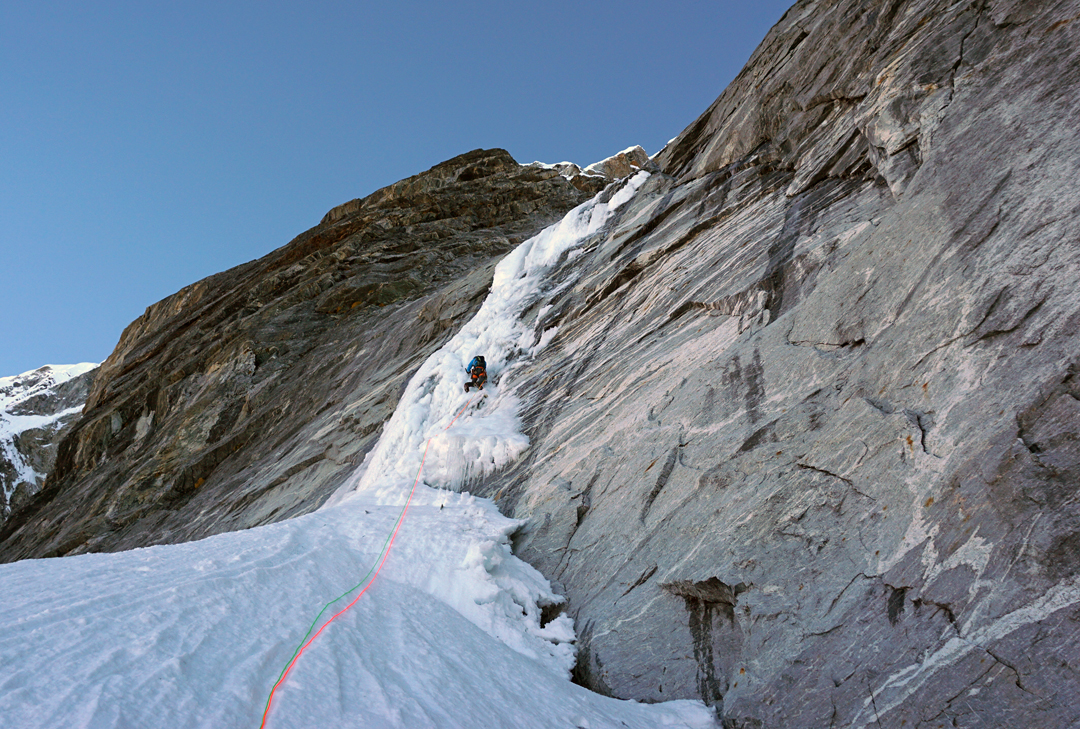 I had intended to try the unclimbed east face of Kang Nachugo (6,737m) in 2015, but the massive earthquake prevented access to the region and forced us to change our objective to the north face of Kantega, on which we were unsuccessful. A year later, in the autumn of 2016, I hooked up with Hiroki Yamamoto to try Kang Nachugo. He has less experience in the Greater Ranges, but is young, skillful, has good endurance, and most importantly is always psyched to climb.

We jumped in a Land Cruiser just the night before the Maoists called for a general strike, and after driving a day and a half, and then trekking for three days, we settled into a cozy lodge in the small village of Na, where we would stay for the next three weeks.

We reconnoitered the east face a couple of times, and although it looked good, with several possible routes, each line had too many objective hazards. As soon as the sun hit the wall, rock and ice avalanches would fall every 10 minutes. We turned our attention to the southwest face, hoping to find a new line.

The direct line attempted by Americans David Gottlieb and Joe Puryear in 2008 first caught our eyes, but the key ice pillar through the steep rock band collapsed a day after we inspected the route. Looking for another option, we found a thinly iced line to the left.

On October 15, 2016, we ascended from Na to our 4,900m advanced base, helped by our sirdar, Hasta. As usual, the face was veiled in thick cloud during the afternoon of our approach, but when this cleared as the sun went down, we saw to our amazement that the thin ice on the steep section had vanished. Our only option now seemed to be a repeat of the Slovenian-Spanish route Monsoon (Kastelic-Padros, 2013), hopefully completing it to the main summit as they had been unable to do.

At 3 a.m. on the 16th, we left our advanced base and reached the foot of the climb. But from here we could see another possible line, farther to the left, on the south face. It was unclear whether we could make it through the rock band below the summit ridge, but given the choice of repeating a line or attempting something new, we chose the latter.

The first pitch was classic WI4 with good ice. This was followed by easy snow and several mixed pitches. The first few hundred meters were exposed to potential rockfall and avalanche, so we climbed simultaneously using two Climbing Technology RollNLocks for protection; the leader would place these devices after he passed a crux, so that if the second fell, the RollNLock would catch him and stop him from pulling off the leader. With this method, we quickly covered the first 500m in one lead block each. There were cruxy mixed sections and rotten ice, but generally the terrain was pretty moderate. We reached our first bivouac spot, at 6,100m, just before dusk, and chopped into a crevasse to create a spot just wide enough to set up a two-man tent.

Next day we climbed a knife-edge leading to the final rock band. I first chose a less steep line, but the ice was pretty rotten and covered with too much snow, so I downclimbed and went up a slightly overhanging line of solid ice. Above this crux lay a snow flute consisting of solid ice and deep snow. Just before noon we reached the summit ridge.

With a bit of sketchy downclimbing, we arrived at a very flat spot where we could leave all our extra gear for a summit push. The Tibetan side of the ridge looked easy, but it was unclear whether we could get from there to the summit due to large cornices. We chose to keep to the Nepalese side, which was more difficult and proved slow going, as we had only one snow stake.

At around 3 p.m. on October 17 we stood on the summit, only the second known ascent of the peak, after Gottlieb and Puryear in 2008. It was very windy, but there were great views of surrounding mountains, including Gaurishankar, Menlungtse, Cho Oyu, and Gyachung Kang. We also discovered we could easily descend to the Tibetan side of the ridge, so we were able to follow moderate terrain back to our bivouac.

On our third day we began rappelling the south face immediately below the bivouac. While the face had been quiet the last couple of days, once we had made a few rappels it became very active, with continual avalanches and microwave-size blocks falling past us. We were very exposed in the first section, but the second half of the descent proved fairly safe from objective hazard, although watching rocks hurtle past just a dozen meters to the side was not comforting. We reached the base of the face in thick mist after 18 rappels. [Gottlieb and Puryear rappelled a similar line from the west ridge after their first ascent of Kang Nachugo in 2008.] Four hours through darkness and cloud brought us back to Na. We celebrated our climb with a stack of beers and Kukuri rum, which made us happy, even if it made my snow blindness worse. After two days on foot and a day on the bus, we were back in Kathmandu.