Hooman Aprin, climber and mountain guide, succumbed to frontal temporal dementia in May 2015 at age 68. At death he was surrounded by loved ones: Lisa Goldoftas and their children, Dora Aprin and Joey Aprin, Hooman’s daughter Tara Aprin, and his granddaughter Nikaya Aprin.

Born in Tehran, Iran, Hooman was an adventurous and independent child who often perched on the rooftop of his family’s compound to read. Drawn to the Alborz Mountains, at age 14 he made a solo ascent of Mt. Damavand (5,610 meters), the highest peak in Iran and the Middle East. Hejoined the Mountaineering Federation of Iran and spent his free time in the mountains.

Hooman moved to Los Angeles in 1966 to study mathematics at USC, but his priority was always climbing. He founded a college mountaineering club and worked at West Ridge Mountaineering. He briefly owned and operated a climbing and ski shop in Park City, Utah, and worked as a head surveyor with helicopter seismic crews in the Rockies and California. He became a naturalized U.S. citizen in 1979.

Hooman’s life revolved around mountaineering adventures. Frequent climbing partners included Fred Beckey, Win Blevins, Leeds Davis, Alex Lowe, and Ang Temba Sherpa. His many first ascents and new routes included climbs in the Sierra, desert towers of southern Utah, big walls in Alaska (Tatina Spire), and the Nepalese Himalaya. Hooman went on 13 Himalayan expeditions, leading most of them. In 1985, he and his team climbed an extraordinarily difficult new route on Ama Dablam (6,812 meters), the Lagunak Ridge. His company, Him-KooH Guides, was the first American guide service to guide Everest successfully, leading the third American woman to reach the summit. On October 5, 1990, he became the first Persian to summit Everest.

As an Exum Mountain Guide from the 1980s to 2000, he guided the Grand Teton an estimated 200 times. As head of Him-KooH, he guided dozens of treks and peaks. He explored new alpine trekking routes and climbs in Nepal for almost two decades and also guided in Iran.

Hooman moved with catlike grace and exceptional power. He generously taught the foundations of walking, developing cadence, focusing on the feet, and breathing. Utilizing the framework of climbing, Hooman led others to accomplish more than they believed possible.

In climbing and in his life, Hooman integrated an ever-increasing spiritual commitment to self-realization. Recalling a pivotal moment when he was riding a train at age 12, he said he suddenly leaned out the window to throw his favorite pocketknife into a deep gorge. I made a point of remembering the thrill of freedom from attachment to that knife, he recalled. I owned that knife. It didn’t own me. This simple event became the blessing of all the future adventures of my life.

During our many adventures together, our conversation typically revolved around matters of spiritual pursuit and meditation. Being a mediocre climber at best, it was a great privilege to have him as my mentor, my climbing partner, and my spiritual brother. His patience and tutelage throughout the many years of our friendship continue to influence my sadhana. In late September, Hooman climbed with me one last time, on Mt. Whitney, a place he loved and where his ashes remain.

Hooman and I spent more than two decades together, as friends, spouses, spiritual seekers, pursuers of climbing and jujitsu (respectively), parents. Hooman tended to lead people into the crest of adventures: An ordinary hike could suddenly turn epic; an easy climb might morph into a marathon. He delighted in recounting stories of shivering all night on a ledge or discovering a “shortcut” to a more interesting route, or showing a novice she could push through barriers and accomplish the seemingly impossible. He loved to laugh and tell stories.

Hooman spent much of his life as a climber and guide. He believed work should be pleasurable and that “insurance” comprised exercise, health, and adventure. Depending on his proclivity, he could transform a difficult goal into something fun and easy, or steer a simple task into an insurmountable barrier. Hooman hugged with enveloping arms and loved his family with a deep passion. He demanded courage and expected loyalty from family and friends. And he was also quick to feel affront or react with bluster and judgment. He disdained the ordinary.

Those who spent time with Hooman knew that, from a very young age, his love of the mountains was inextricably connected to his spiritual quest. As a climber and guide, Hooman believed he protected those under his care with an “invisible rope.” He was a complex soul, and being close to Hooman entailed getting comfortable with being perpetually off-balance. I feel grateful to have experienced and been a part of Hooman’s life, with his excitement, optimism, and transcendent joy.

The most remarkable quality about Hooman Aprin, to me, were the extraordinary gifts of the spirit he made to his comrades. For instance he gave me one of immense value: self-knowledge.

When things got tough in the mountains, he liked to say, “Welcome, danger, my old friend.” Sometimes I sang it back to him with the tune of the Paul Simon song.

He welcomed danger because it brought challenge. And challenge, to him, was the proving ground.

Every climber knows the situation. You say to yourself, “I have to make this move or we’re stuck on this mountain forever.”Or, “This pin has to be really good, because the next protection is a long way up.” Or, “I have to get myself out of this crevasse. It’s entirely up to me.”

It’s entirely up to me, the nature of life itself.

I caught on slowly. For several years, as I learned to make harder climbs, I often wondered why Hooman often put me in situations that seemed to test the far edge of my ability.

One day I asked him, “Why do you choose me as your lifetime partner?” He was much the better athlete and by even more the better climber. For instance, I could not hope to match his spectacular achievements in the Himalaya.

His answer was a simple sentence. “I can depend on you.”

I thought, I hope he can always depend on me. Which, as I didn’t yet realize, was code for, I hope I can always come through for myself. And: It’s entirely up to me.

One winter we agreed to go to Joshua Tree every weekend. Somehow my mind bored into climbing as never before.

But he called on a Saturday morning and said he’d sprained his ankle.

I took a chance. “Maybe I’ll climb solo.” I could scarcely believe my own words, but they made my heart leap.

We talked what I wanted to climb: Tiptoe, 5.7. Hooman told me how to make a self-belay, which I had never done or seen done. He also told me not to trust that belay.

Tiptoe is a one-pitch dike, corners of rock sticking out about half an inch and heading straight up the rock. Narrow toe holds and no hand holds, so balance was all.

At the bottom, tied in to the unreliable belay, I asked myself several questions:

“Have you done this?

Remembering Yoda—“There is no trying, only doing”—I felt a surge of energy and declared firmly, “YES.”

It’s entirely up to me.

The first 40 feet went well. Then I came to a bad patch. The rope of that useless belay got tangled below me.

I gaped down at it. Nothing harder than downclimbing a dike, groping for invisible footholds.

I focused, double-focused, and did it.

In a couple of minutes I sat on the top. And blubbered like a baby, in happiness.

I climbed unroped the rest of that day, playful as a mountain lion kitten, sure I could do anything.

I come through for myself.

That conviction got me out of a crevasse on Mt. Rainer, an awful two-day whiteout on San Jacinto, and other perils. It also bolstered me for sticky wickets in my writing life—directors and producers, agents and editors—I can depend on me.

This story is entirely about the generosity of Hooman Aprin. Thank you, Hooman. What you gave me is priceless. 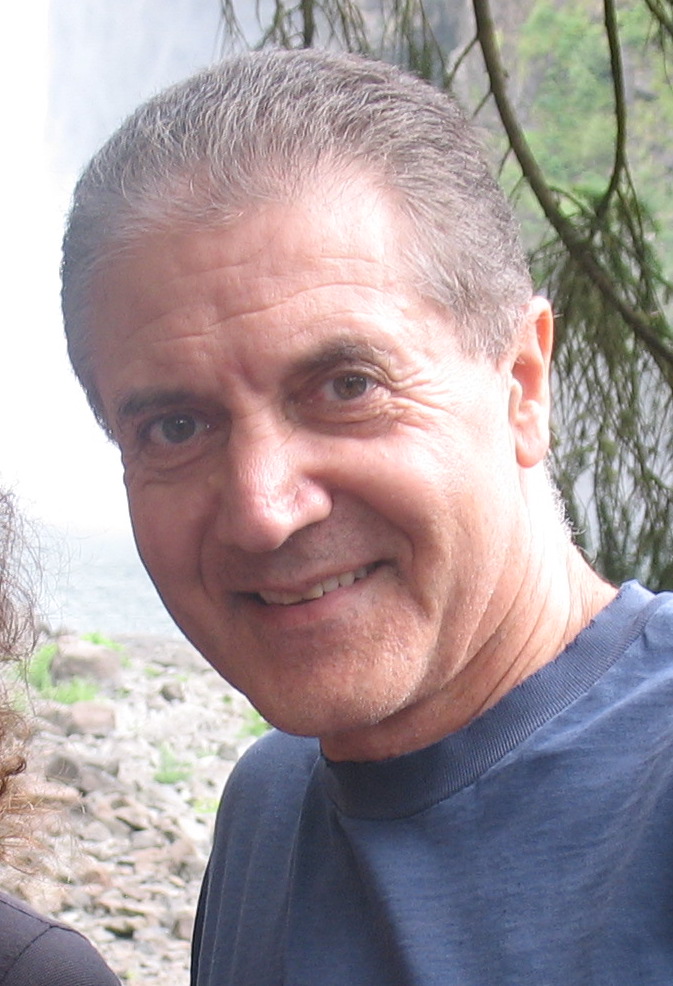 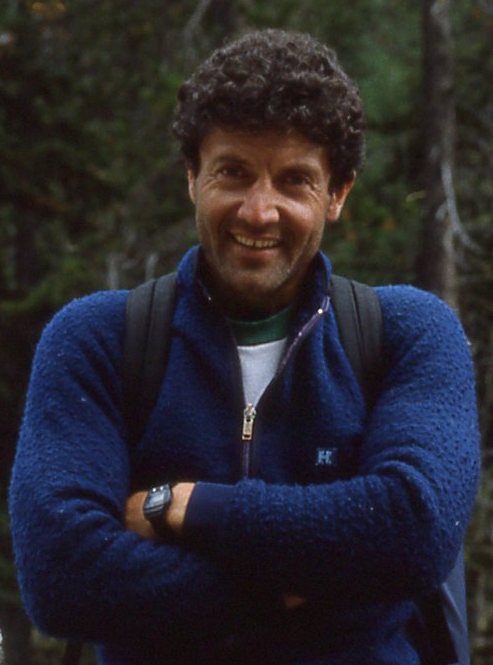