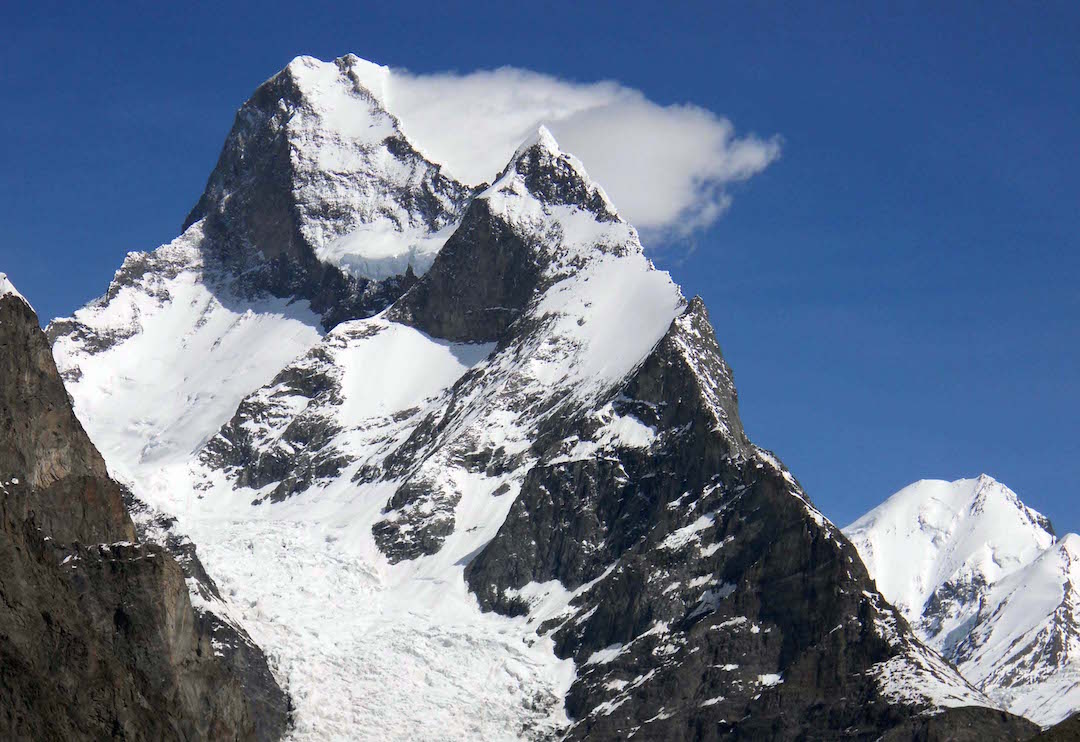 My friend Matthias Konig had mentioned that the characteristic shape of 7,284m Muztagh Tower made it his longtime dream mountain. On July 12, after a five-day trek, we arrived at our base camp (4,400m) on the Baltoro Glacier, just below the tower, ready to try and fulfill Matthias’ dream. We were only two hours from the highly popular track to K2, but in the next four weeks nobody passed by. In fact, in the last 15 years only three climbing parties have visited Muztagh Tower.

Above base camp we carried a satellite phone for emergencies and for weather reports regularly provided by my loving girlfriend. All the love did not help: Unstable weather, which characterized the 2016 Karakoram summer, soon became our biggest issue.

We established a camp below the southeast ridge and continued below the northeast flank on the Younghusband Glacier. As the sun released huge snow avalanches, we carefully planned acclimatization climbs, starting early and moving at night. After a few days of brilliant sunshine, interrupted by a small snowy disturbance, we climbed an easy 6,000m peak and then reached 6,700m on a subsidiary summit on the ridge west of Skilbrum (7,410m), on the Pakistan-China border.

Eight days were spent exploring the beautiful Younghusband valley, until we felt time was beginning to run out. We hoped to climb Muztagh Tower’s southeast ridge directly from a point on the glacier at around 4,900m, a vertical interval of ca 2,500m and a climbing distance of 6km. As a two-man team we would have to climb light and, hopefully, fast. Seen from the Baltoro, the ridge has three tops: a rocky tooth, then the Black Tooth at 6,702m, and finally the main summit. These would form the three stages for our climb. The unrepeated 1956 French Route on the upper southeast ridge follows glacial terrain and mixed ice and rock slopes on the southwest flank of the ridge to join the crest beyond the Black Tooth.

In early August, despite mediocre weather conditions, we climbed a 500m snow and ice couloir on the northeast flank to reach a notch in the ridge at ca 5,500m. To my disappointment, the rocky crest initially was extremely loose—I easily kicked off huge blocks that fell hundreds of meters into the void. Luckily, the rock quality improved, but smooth vertical walls on both sides left no options for an emergency exit. We followed the exposed crest, passing gendarmes mostly on their east side. We didn't seem to gain much altitude, and the clock was ticking. A short, strenuous crack, which turned out to be the technical crux, led to a small plateau. It was too small to pitch our tent, so we climbed on, into the night, until we found a bivouac in the open, on a very small ledge, tied to the wall. We had been climbing for 19 hours.

The next morning a couple of clouds blocked the sun, delaying our departure. After more climbing over steep steps and gendarmes that slowed progress, we finally reached the top of the rock ridge: the rocky tooth at ca 6,000m. To that point we had climbed a distance of 1,700m, belaying and simul-climbing around 24 pitches, up to 6a+ and 60° ice, using a small rack. Above, a beautiful snow arête rising to the Black Tooth promised faster progress.

It was already 2 p.m. and now windy and snowing. As we were at the only flat spot seen so far, we decided to pitch the tent and rest. During the following night the wind increased, and when we woke next morning visibility was bad. In these conditions cornices would be a big danger. As we were low on food, the weather was decidedly unsettled, and perhaps with the death of Pavle Kozjek in mind (AAJ 2009), we deemed climbing any higher to be unreasonable.

Below us lay the only break in the steep walls of the southwest flank. After 700m of downclimbing and five rappels we reached the Dre Glacier and the crevasses and icefalls of the French route. Descending the glacier proved epic (the French had fixed ropes here) and led to an unwanted night out. Noisy cracks let us know the glacier was alive, and luckily, after a sleepless night, so were we. Two hours later we regained base camp. Above our high point the route to the summit is largely on snow, but linking it all would be a hell of a job.