On September 13, Timothy Hagan set out to finish the last of his climbs on the list of 100 Peaks at Mt. Rainier. The Chief is the eastern and highest peak of Sluiskin Mountain, a route that requires a 15-mile, 5,000-vertical-foot approach, followed by a blocky, 30-meter, 4th-class climb up an arête, with significant exposure. An average of six parties each year climb the route, both roped and unroped. 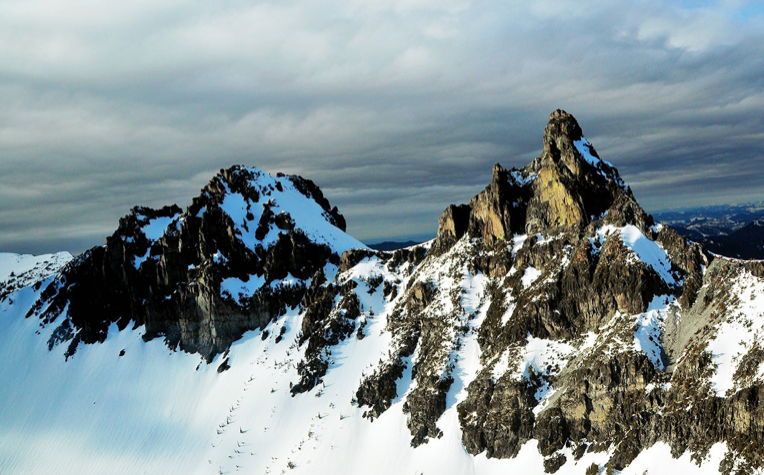 Hagan approached the peak with a non-climbing partner, who belayed him up the final 30-meter pitch, which he protected with two slings. He yelled to his belayer at the base of the climb that he didn’t have webbing long enough to wrap around the large boulder commonly used as a rappel anchor. There were five interwoven loops of tied slings already wrapped around the boulder, but most were sun-bleached and worn. A new black sling was threaded through a steel rappel ring. Hagan chose to use this rappel anchor, but when he weighted the ropes, the webbing loop came untied and the ring slipped off the end. Hagan tumbled about 60 meters to his death.

A recovered photo of the sling before Hagan used it showed a knot concealed by a lip of rock; one end of this knot had a tail at least three feet long. Inspection of the webbing after the accident showed an overhand knot near one end and no knot on the other end. Rangers believe the overhand knot was the remnant of an incomplete or incorrectly tied water knot intended to join the webbing ends. Hagan may have felt enough friction from the long tail of webbing—either lying in the rocks or cinched inside the partially completed water knot—to be convinced the anchor was solid.

The anchor that failed had been left the previous day by another party. They had anchored their rappel through the steel ring and the black webbing but also threaded a strand of the existing, weathered webbing as their primary anchor, and they never weighted the newly placed backup sling.

Two possibilities can be considered for how the anchor failed. The party that set the anchor may have placed it correctly with a water knot, and Hagan untied it to adjust the position but didn’t retie it. Or the first party didn’t tie the anchor correctly but didn’t realize this because the second piece of anchor webbing held their weight. Either way, Hagan failed to inspect his anchor adequately. Both Hagan and the previous day’s party were at the anchor near dark and may have felt time pressure. Hagan’s belayer said the climb took twice as long as anticipated and was cold and windy, so Hagan was likely tired and rushed. A second, redundant anchor likely would have prevented the accident. (Source: Dan van der Elst, NPS Ranger.)

Editor’s note: According to Rainier National Park’s annual mountaineering report, there were 55 search and rescue operations in fiscal-year 2015 (ending October 1, 2015), the busiest SAR year the park has ever seen, despite about a 9 percent drop in registered climbers. About 25 percent of emergency SAR incidents were attributed to climbers. There was one upper-mountain fatality (reported above), as well as three upper-mountain short-haul rescues.