A brief history, new climbs, and much left to explore 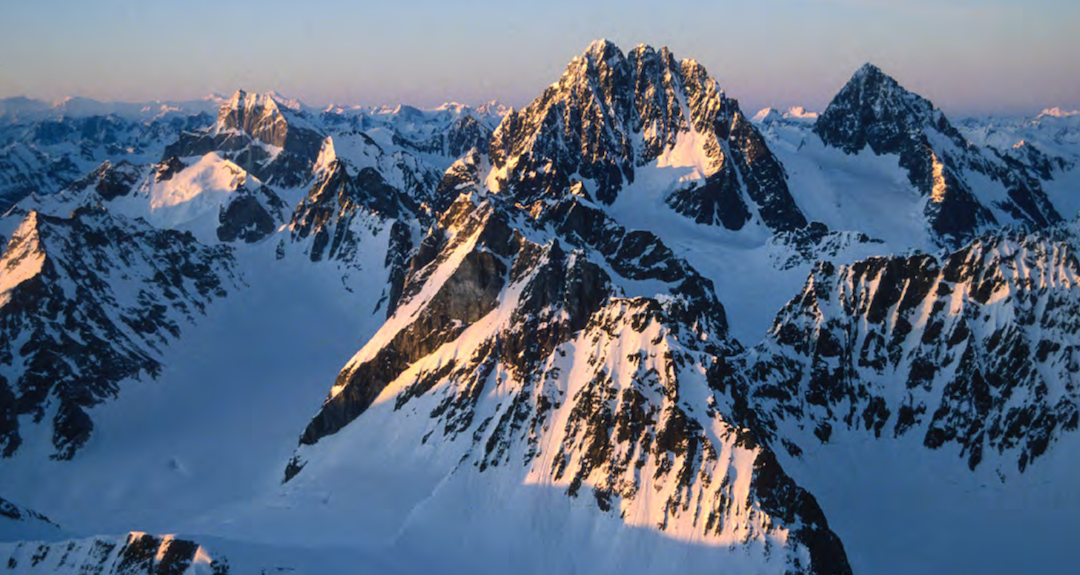 Many climbers have never heard of Alaska’s Neacola Mountains. In half a century, only a handful of climbing expeditions have gone there—and even fewer successful ones. Lower-elevation peaks (for Alaska), a remote location, harsh weather, and unnamed mountains and glaciers likely play a large part in the range’s obscurity. Moreover, the first significant climbs in the area, in 1965, were never widely reported, and Fred Beckey, who made the second known trip into the central Neacolas, in the early 1970s, thought the area fine enough to keep it secret for upwards of two decades.

However, as with the recently “rediscovered” Revelation Mountains, to the northwest of the Neacolas, it would seem this range is finally getting more climbers’ attention, with two separate European parties climbing new routes in 2015. But there’s still plenty to do. Alaskan climbing historian Steve Gruhn suggests that more than 90 percent of the peaks in the range remain unclimbed.

This article will focus on the central Neacola Mountains, bound by Turquoise Glacier to the west, the main North Fork Glacier to the south, Neacola, Tuning Fork, and Slingshot glaciers to the north, and the main Pitchfork Glacier on the east side. This area, which lies entirely within the Lake Clark National Park Wilderness Area, holds a dense array of ice-covered peaks. The glaciers hover around 4,000 feet, with maximum peak elevations of just over 9,000 feet. Most of the peaks are not officially named.

Some of the peaks in the Neacolas are comprised of Bugaboo-like granite, with soaring, crack-laden walls. Others have extensive black basalt or diorite layers, which, when covered in snow and ice, add great complexity to this unassuming range. A short season, poor coastal weather, and intricate glaciers compound the difficulty of planning a trip. At least one climber has described the range in a relatable and desirable context: “A heavily glaciated version of the North Cascades.” Let’s go with that. 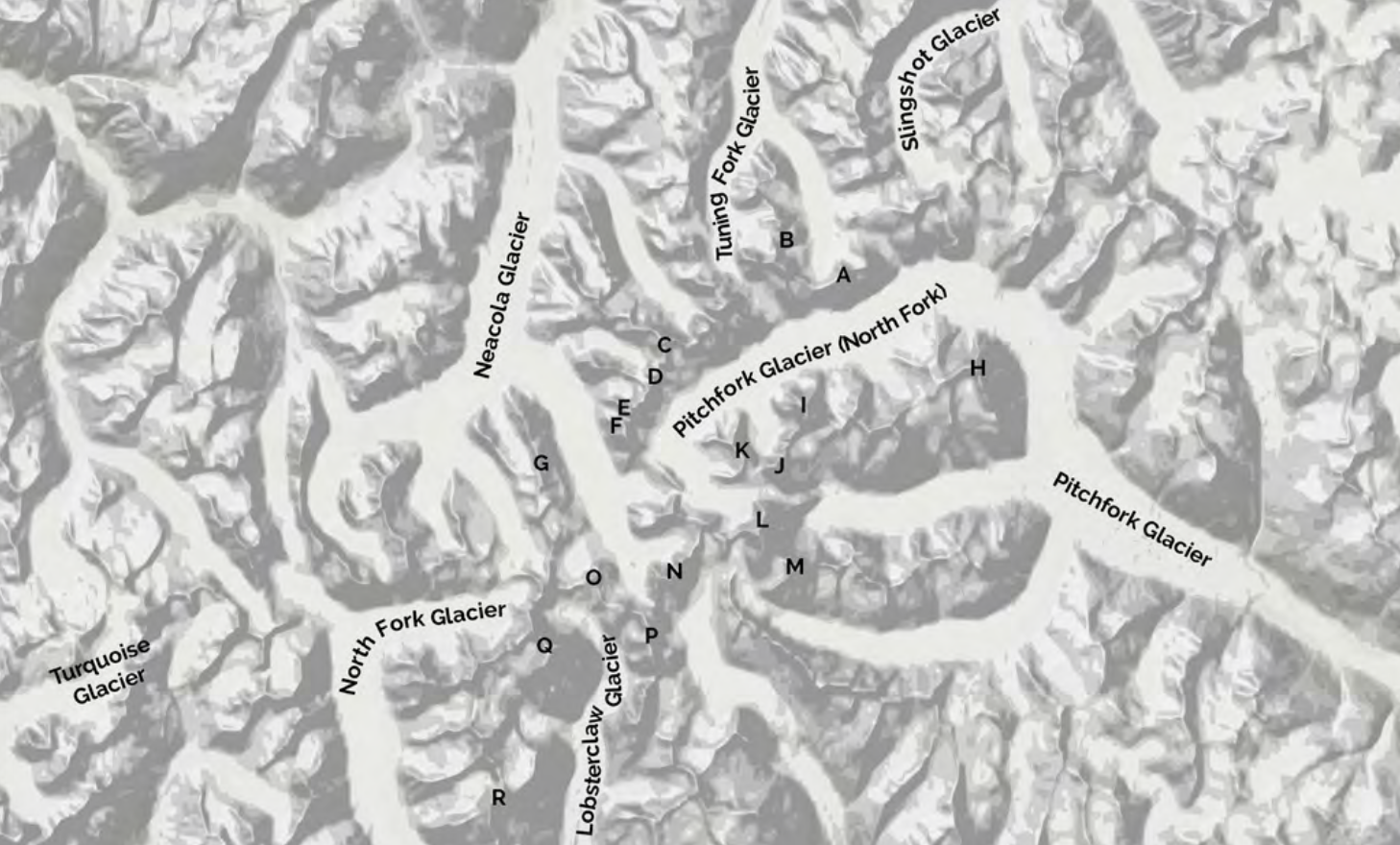 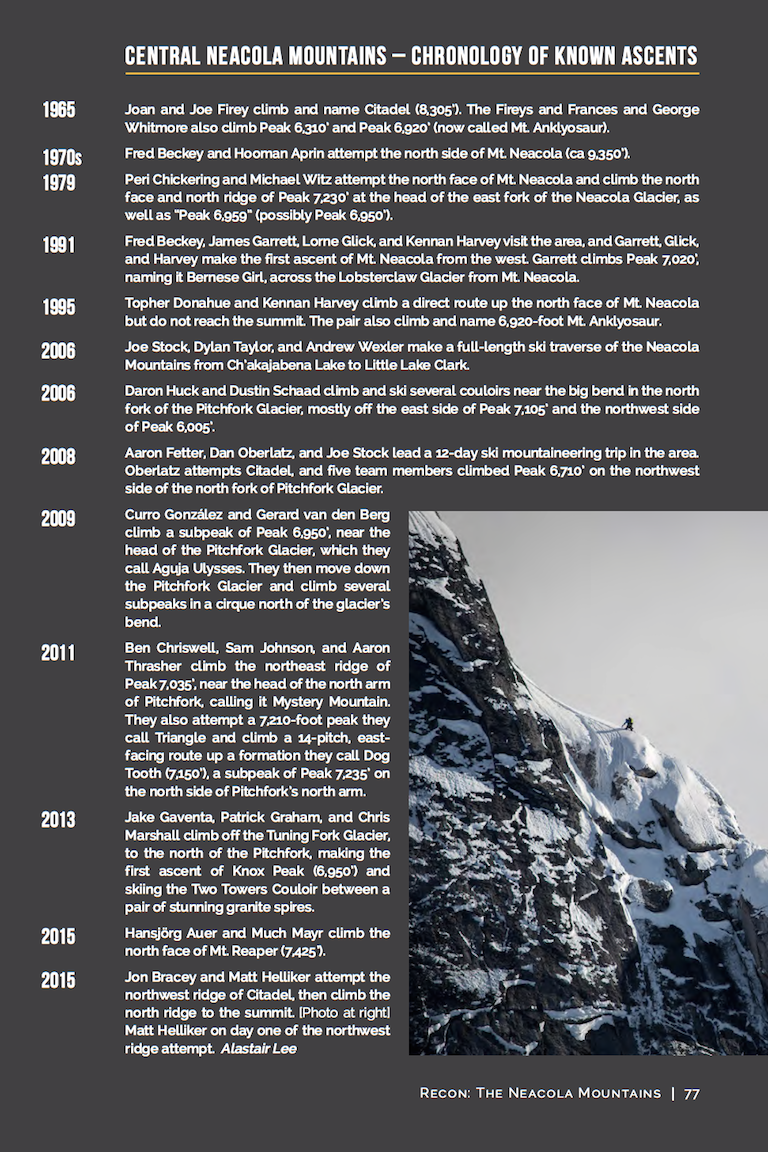 The climbing history in the central Neacola Mountains began in 1965 when Joe and Joan Firey and Frances and George Whitmore (who made the first ascent of the Nose of El Capitan) completed the first known expedition into the range. After climbing two smaller peaks and attempting a couple of others, they made the first ascent of Citadel (8,305’), a hallmark peak of the area. In the early 1970s, Hooman Aprin and Fred Beckey attempted Mt. Neacola, the highest summit in the range, at approximately 9,350 feet, but were unsuccessful.

In 1979, Peri Chickering, Todd Denman, Jon Stevens, and Michael Witz, believing they were the first climbers to enter the range, planned an attempt on Mt. Neacola. Their warm-up was the west ridge of a peak they reported as 6,820 feet but was likely Peak 6,920’, now known as Mt. Anklyosaur. During the descent, Denman fell about 35 feet, badly bruising his tailbone. He and Stevens decided to attempt the 25-mile ski out to Telaquana Lake and try to find a plane. After two days they reached the lake, and, with food running out, they discovered a rowboat, rigged a sail out of their tent fly, and sailed 10 miles across the whitecapped lake to an old village marked on their map. The village was deserted. Luckily, they were able to flag down a plane and leave the mountains. Chickering and Witz were unsuccessful on the big north face of Neacola but did make the first ascent of Peak 7,230’, at the head of the east arm of the Neacola Glacier, via the “fantastic” north face and ridge, and also the west face of “Peak 6,959” (likely Peak 6,950’).

Fred Beckey eventually spilled out photos and enthusiasm for the area to longtime exploratory climber James Garrett, and the two, along with Lorne Glick and Kennan Harvey, traveled there in spring of 1991. Beckey stayed in camp, assuming his role as “spiritual leader,” while the three made the first ascent of proud Mt. Neacola by a steep, icy ramp on its west face.

Garrett wrote in AAJ 1992 that they underestimated the route from photos: “The hard ice provided secure belays, although it was a wrenching effort to get the anchors in. Rock placements yielded little protection in rock unlike so much of the beautiful granite on surrounding peaks. The angle steepened to 65° as evening neared.... Ice clogged many of the screws and they became difficult to place; long runouts followed. Kennan led the last pitch through the ice bulges below the saddle. Three hundred feet, two ice screws! Lorne and I cheered him on. He was in his own private Hell.”

Considering the timeline of Alaskan climbing, it’s incredible to consider that only two of this range’s great peaks—Citadel and Neacola—had been climbed by the early 1990s.

In 1995, Harvey returned with the young and talented Topher Donahue. Their focus was on difficulty, and they aimed for the massive north face of Mt. Neacola—what Donahue calls the “Medusa Face,” about 4,500 feet tall. Using a portaledge and completing much intricate ice, mixed, and aid climbing (up to 5.10 and A3), they reached the top of the face at midnight, “about 800 feet” of easier climbing below the summit. “We spent the night doing the dance of life on a tiny ledge chopped into the ice,” Donahue wrote in AAJ 1996. “Morning brought no improvement, and clouds poured off the ocean to the east. Opting for descent while we still could, we rappelled through the storm.” The face hasn’t been attempted since. 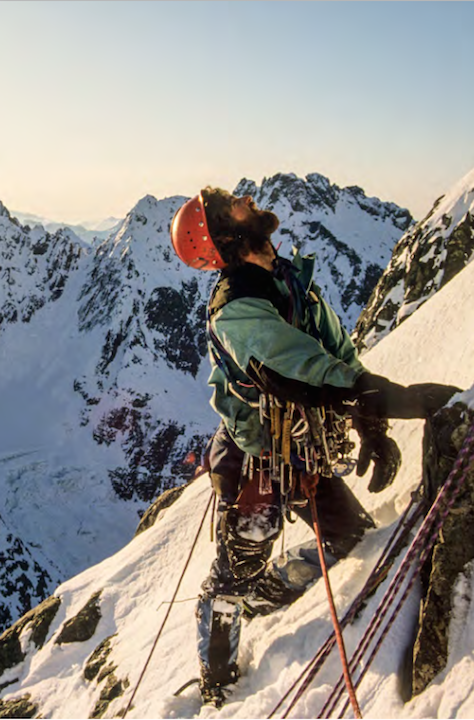 Until recently, much of the activity in the central area of the Neacolas has been skiing. One high point came in 2006, when Joe Stock, Dylan Taylor, and Andrew Wexler made the first ski traverse of the entire range, traveling over 100 miles from end to end. In the same year, Daron Huck and Dustin Schaad reported climbing and skiing a number of 3,000-foot couloirs in the northern sector of the Pitchfork Glacier. 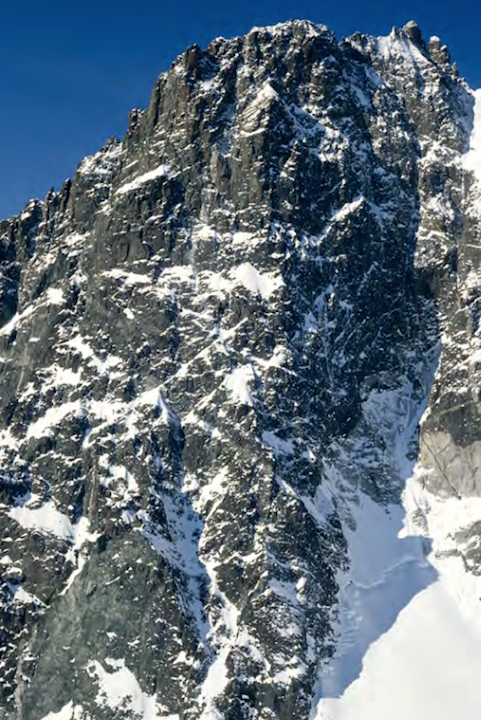 Climbing activity has gradually increased. In 2009, European climbers Curro González and Gerard van den Berg visited the Pitchfork Glacier, making several ascents of small peaks by mixed routes and gullies. A couple of years later, in 2011, Ben Chriswell, Sam Johnson, and Aaron Thrasher also visited the Pitchfork Glacier, making the probable first ascent of a snowy peak they dubbed Mystery Mountain and a fine granite spire they called the Dog Tooth—the latter resembles the east face of Pigeon Spire in the Bugaboos, both in shape and rock quality. In 2013, a three-man party climbed Knox Peak above the Tuning Fork Glacier.

The spring of 2015 saw two impressive ascents off the Pitchfork Glacier by visiting European teams: Hansjörg Auer and Much Mayr made the first ascent of Peak 7,425’, which they called Mt. Reaper, by its steep north face, and Jon Bracey and Matt Helliker climbed the 3,700-foot north ridge of Citadel for the peak’s second ascent, after first attempting the striking northwest ridge.

The highest concentrations of interesting peaks in the central area are located off the Pitchfork Glacier, the head of the Neacola Glacier, and the North Fork and Lobsterclaw glaciers. The huge north face of Neacola remains unclimbed to the summit. Topher Donahue commented, “There’s a rad, El Cap–size ice line to be done on the right side of the face, but it was threatened with an active serac when we were there [in 1995]. Maybe with climate change the serac is less active now, or gone entirely, in which case one of the sickest ice lines in North America is waiting.”

At the head of the central arm of the Pitchfork is a pair of stunning unclimbed summits, steep on all sides: Peak 8,908’ and Peak 8,505’. On the west flank of “Triangle Peak” (Peak 7,210’) and its neighbors is a group of complex granite spires reminiscent of the Waddington area. Many impressive peaks west and north of the Pitchfork and west and south of Mt. Neacola are unclimbed. Undoubtedly, other objectives will reveal themselves as more climbers visit. 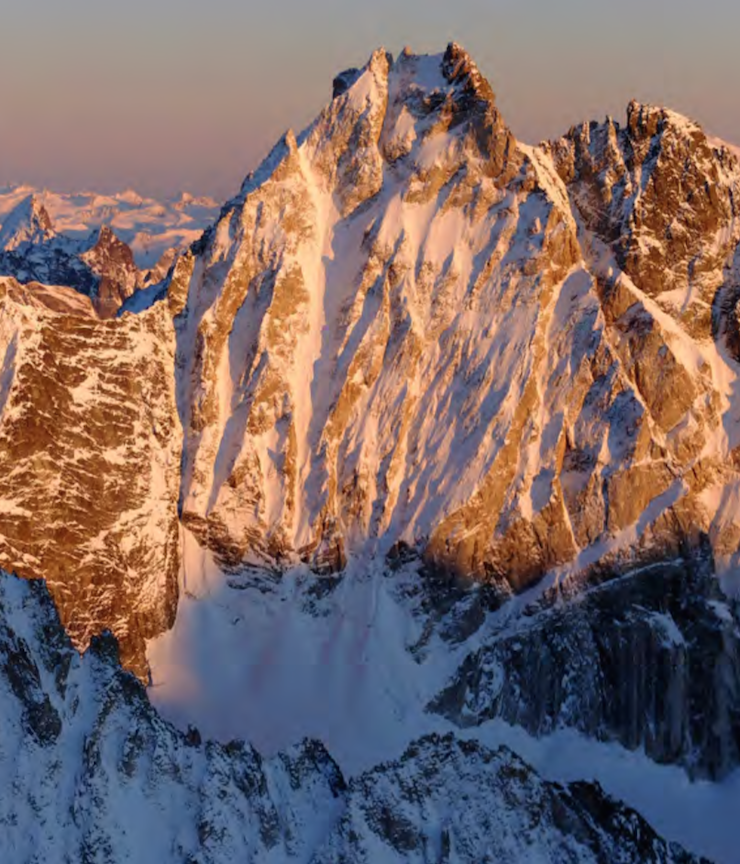 Most climbing expeditions have flown in by ski plane with Doug Brewer (Alaska West Air), based outside of Kenai. No commercial helicopters are allowed to land in Lake Clark National Park, which means teams must rely on ski-plane landings in this lower-elevation area. Because of this, the best time to visit is likely to be from April to early June.