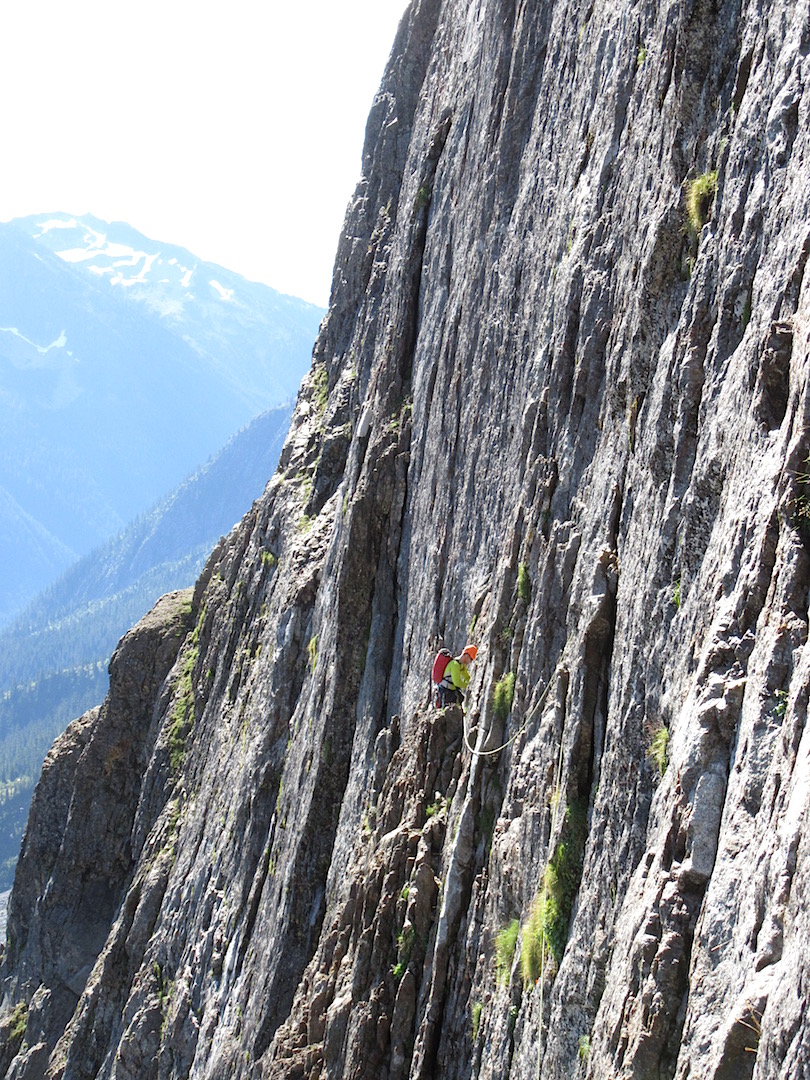 The first repeat of the East Face Route (ED2 VI 5.9 A3+) on Mt. Slesse—first climbed in 1997 by Sean Easton and Dave Edgar—has been on the minds of local rock climbers for almost 20 years. In spite of attempts by skilled climbers, the route remained unrepeated. Craig McGee and various partners freed the first seven pitches in the mid-2000s at 5.12c, but could not reach the easier upper wall. After studying photos, I came to believe a traverse could be made from the start of the East Pillar Route rightward into the East Face. It seemed like dodging the difficulty of the lower face could make for a nice moderate free climb.

On August 11, after scrambling up the lower ridge, my friend Paul Cordy and I began some new pitches in the warm morning sun. Our long traversing third pitch led to a particularly committing location above the steep terrain of the lower East Face Route. “This rock is super solid,” Paul declared confidently during his first lead of the day. Encouraged, I looked up just in time to see Paul’s only hand and foot holds break simultaneously. He fell a meter but somehow caught himself on a jug, preventing a much bigger fall. The impact broke two fingers, although not badly enough to stop Paul from continuing to follow the remainder of the route. A more serious injury here would have proven very inconvenient.

We found the climbing to be a healthy exercise in choss management—well protected at times but also with big run-out sections. The terrain was free climbable at a moderate grade, though it wasn’t clear how well we followed the original aid line. We may have done a variation on the last steep pitch, climbing left up a ramp.

The Pocket Glacier far below occasionally shed large chunks, creating a sinister ambience. Belay bolts were not in good shape, nor did we find them at every anchor, as the East Face Route topo states. In the end, we climbed 16 pitches up to 5.10. Only a standard rack is necessary.