On November 10, Koren, Kurinčič, and Mikuž made an attempt on the east face of San Lorenzo, turning back in deteriorating weather. During this short weather window, Petrovčič and Kastelic climbed a new route on Cerro Hermoso (see report here).

On November 20, while the other two Slovenians were climbing on the far left side of San Lorenzo’s east face, Koren, Kurinčič, and Mikuž began an attempt on the far right side. They started from base camp at midday and reached the base of the southeast-facing section of the wall by 5 p.m. They started climbing at 7 p.m., moving unroped up 70° snow slopes. By midnight they had covered 800m and reached the icefall that connects the lower and middle parts of this face. Here, they roped up and climbed mixed terrain to the first serac. At this point they traversed left on a diagonal for five pitches, across very hard ice, to find a passage between the second and third seracs.

By dawn on November 21 they had reached the base of the third serac. Despite a windless weather forecast, a southeasterly wind had picked up around midnight and became quite strong after sunrise. The wind prevented them from stopping to melt water, so upon intersecting the Sudafricana Route on the east ridge (ca 3,450m), they decided to call it good without continuing on to the summit. To this point, they had climbed 1,600m. It was 3 p.m. and they had climbed for 20 hours.

To descend, they rappelled the northeast face, which was more protected from the wind, making around 40 rappels (1,000m). They reached base camp at dawn on November 22, after being on the go for 40 hours. They call their line to the ridge No Fiesta (1,600m, ED+). 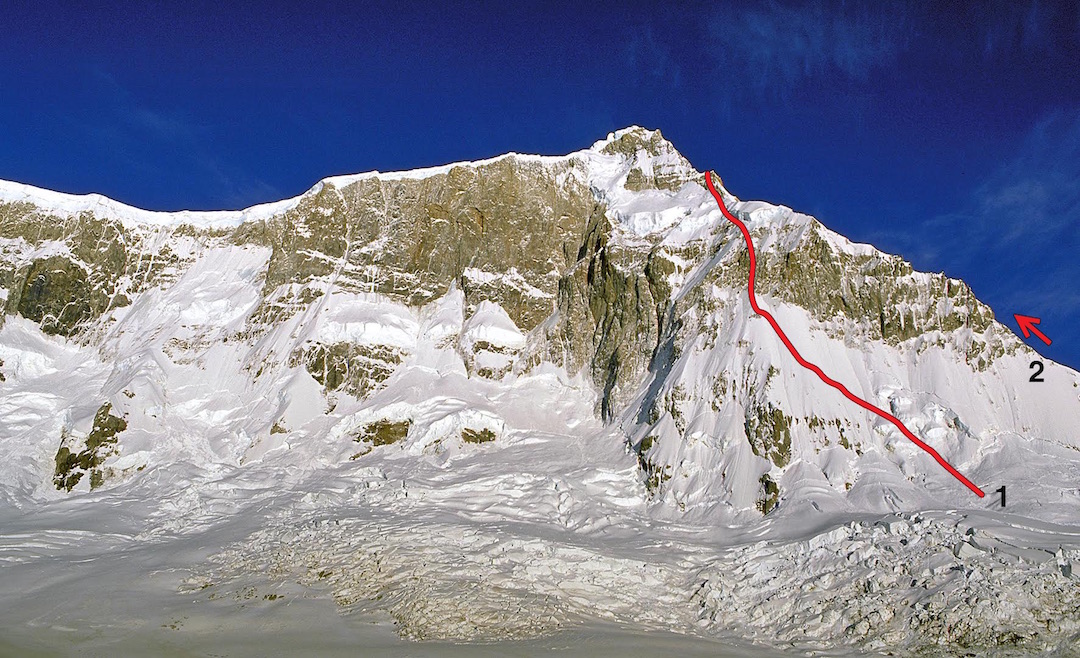 The east face and main summit of San Lorenzo. (1) No Fiesta, the 2015 Slovenian line, with a high point at the junction with the Sudafricana Route on the east ridge at about 3,450m. (2) Sudafricana Route (1986) to summit.
Rolando Garibotti
Previous Next

The east face and main summit of San Lorenzo. (1) No Fiesta, the 2015 Slovenian line, with a high point at the junction with the Sudafricana Route on the east ridge at about 3,450m. (2) Sudafricana Route (1986) to summit.
Rolando Garibotti
Previous Next