On June 22, 2015, French alpinist and Bolivian resident Anne Bialek, accompanied by Bolivian UIAGM guides Hugo Ayaviri Quispe and Rolando Tarqui Choque, made the second known female ascent of the south face, via Directa Boliviana, an important variant to the original route. The three camped on the 21st at 4,805m, above the abandoned mine of Mesa Khala, and left for the face at 1 a.m. Two hours of walking brought them to the base at about 5,080m. Starting to the right of the 2015 route Directa Italiana (AAJ 2016), they followed a prominent gully of rock, snow, and ice back left to a point above the initial difficulties of the Italian route, and then climbed through mixed ground and a shallow gully to reach 5,500m and the start of the long snow slopes by midmorning.

From thereafter their route followed very similar ground to the 1974 Laba-Thackray route and Directa Italiana. By 6 p.m. they had reached a point above the seracs at roughly 6,200m. Rather than bivouac, they elected to continue, climbing a number of icy passages and, higher on the summit ridge, through a strong wind that slowed them even further, until they reached the summit at 9:30 p.m., tired, sore, and cold. The celebration on top was necessarily brief, and by 1 a.m. on the 23rd they had descended the normal route to the Condor’s Nest, where they were met by a party with warm soup.

The overall difficulties were considered similar to the better-known French Route on Huayna Potosi, with mostly steep névé and relatively easy alpine ice. Their line is relatively direct and might become the standard way on this face for parties not up to the more technical lines.

Anne Bialek is the first woman to have made the complete traverse of all five of Illimani’s summits and to have summited all 13 of Bolivia’s 6,000m peaks. It is also possible she is the first woman to have climbed the west face of Huayna Potosi. The first known female ascent of the south face was by Canadians Karen McNeill and Sheila Hendricks in 2001, via a new route on the left side of the face, Nada Es Seguro. 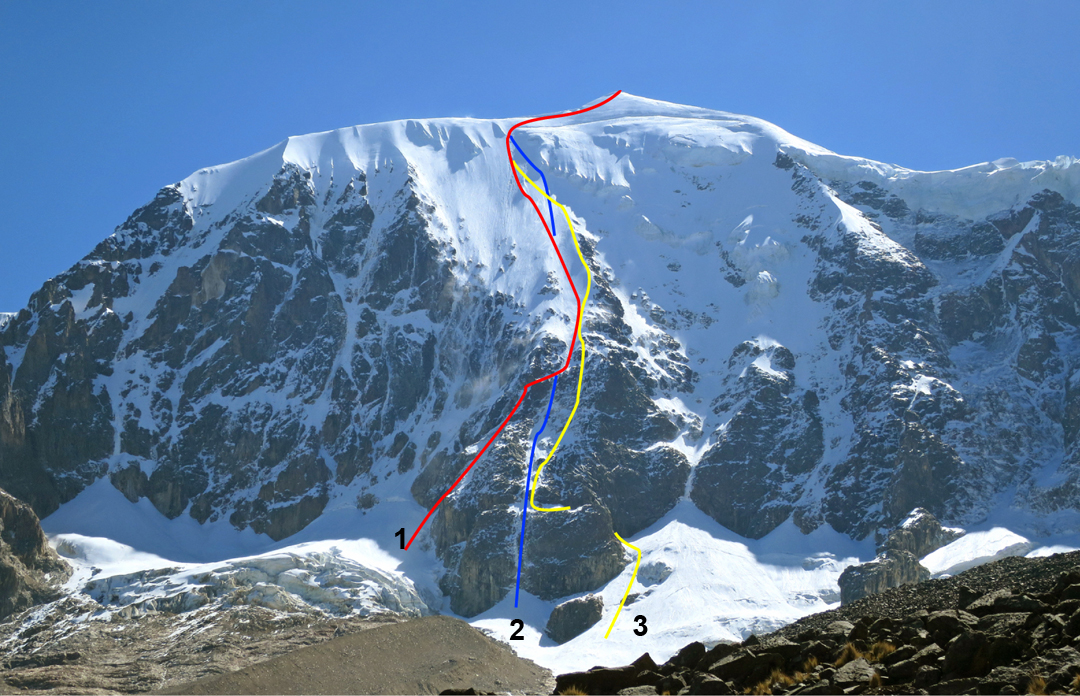 The south face of Illimani. (1) Approximate line of the original 1974 Laba-Thackray Route. (2) Directa Italiana (2015). (3) Directa Bolviana (Bialek-Ayaviri-Tarqui, 2015). Other routes to the left are not shown
Thomas Arfi
Previous Next

The south face of Illimani. (1) Approximate line of the original 1974 Laba-Thackray Route. (2) Directa Italiana (2015). (3) Directa Bolviana (Bialek-Ayaviri-Tarqui, 2015). Other routes to the left are not shown
Thomas Arfi
Previous Next