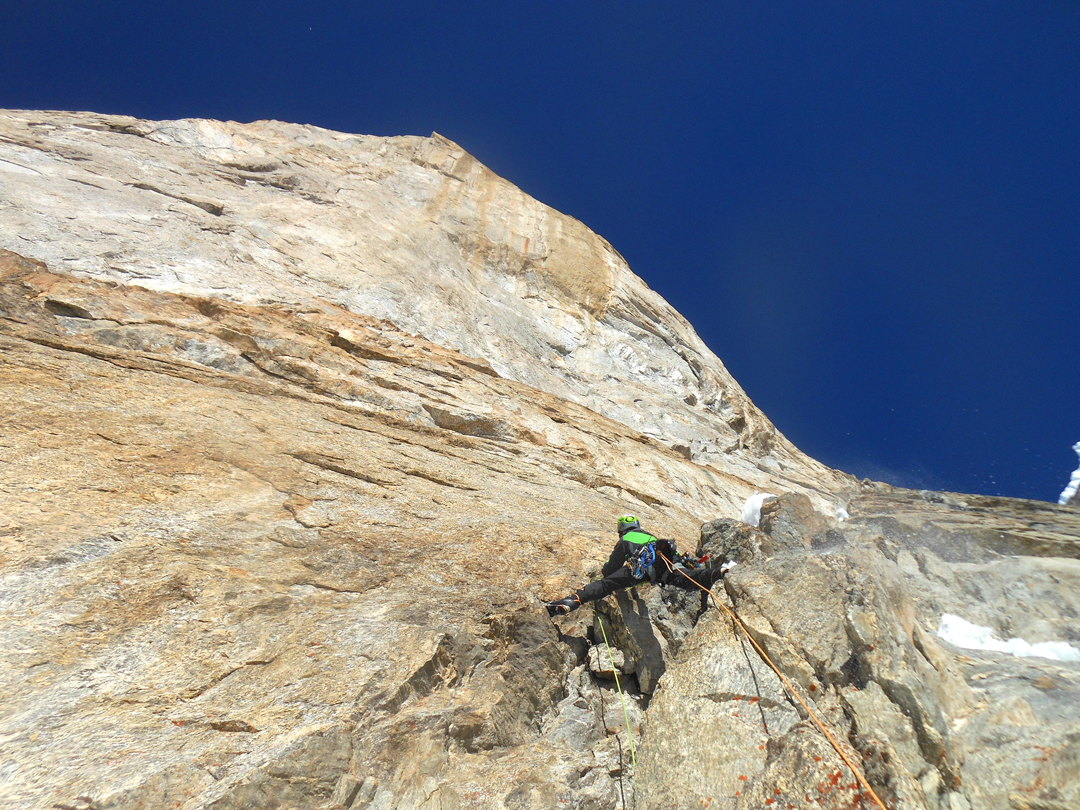 For years my brother Silvestro and I had the east pillar of Kishtwar Shivling in mind, and finally in the autumn of 2015 we found two friends—Nicola Binelli and Luca Cornella—to join us. We had the support of a local agency and four fantastic guides, Amit, Bagu, Pritam, and TC, who accompanied us to the foothills. We soon realized their support was essential—we couldn’t have passed through the several checkpoints or conversed with the locals without them.

After a two-day drive along a treacherous road from Manali and three days’ trek with mules, we arrived at base camp (3,360m). Over the next 10 days we ferried all our gear to the foot of the east pillar. When we began climbing, we were surprised to find that old rope and bolts placed during the abortive 1992 Italian attempt were still in place. After 50m these vanished and it was just us and the pillar.

The east pillar is surprisingly vertical, even overhanging in places, and our chosen line was the only feasible option if we were to climb predominately alpine style, connecting the weaknesses on the face. We first climbed about 200m and then dropped fixed lines straight to the ground. On June 1 we jumared the ropes at night, and as soon as it was light I started leading. I was cautious, as the rock alternated between sound and friable. Even so, I snapped a handhold and flew. It was only a few meters, but I was bruised, cut, and there was a worrying pain in my ankle—it had been injured before I left Italy.

Soon afterward, Silvestro took the lead. He climbed a few pitches before also falling because of rotten rock. Sharp pieces of granite hit him on the head. Nicola and I manage to avoid them, but Luca was in the middle of a little chimney and was struck hard on the shoulder. Two of our ropes were damaged. We were forced to retreat to our high camp (Vedetta Camp) at 4,960m. We may have taken too many risks, and my mood was rock bottom, as I was now limping around on a painful ankle, wondering if I would be able to walk down to base camp the following day.

In the middle of the night there was a loud roar. Something missed our tents by a few meters and we were engulfed in the spindrift of an avalanche. Next morning I found I could walk, and we decided to leave the tents and equipment and descend. That is, all except Luca, who opted to carry his gear down to the valley—he was in pain and too shaken by events to continue. 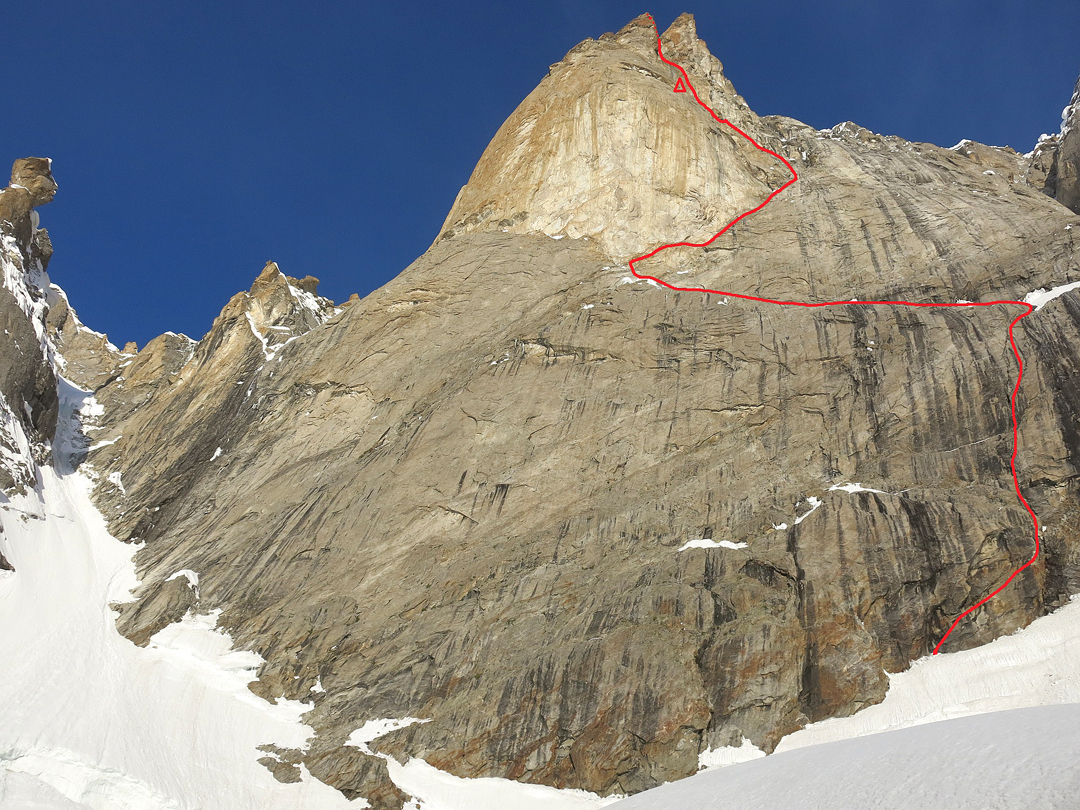 After a few days of rest we recovered, though my ankle was still inflamed. On June 5, Nicola, Silvestro, and I returned to Vedetta Camp, the first two getting hit by icefall in the approach couloir. We took a day’s rest and then refixed our ropes and hauled gear to the top of them.

On the 8th, even though it was snowing, we started climbing. I led at first and it went well. Then Silvestro took over, and by 12:30 p.m. we reached our previous high point. It was cold and misty, and I decided to dispense with rock shoes and lead in mountain boots. It took a long time to climb the overhanging chimneys above, and at the top I saw no good ledge, only snow hanging off the wall. My enthusiasm waned, as there did not appear to be anywhere to bivouac. However, when the other two joined me and checked out the magical snow structure, they found it was firm. We decide to bivouac there, at 5,600m, without sleeping bags and with only one dehydrated meal between the three of us. We named this spot the Floating Meringue. That night was long and cold, but at least, being on an east face, we got the sun first thing the following morning.

At around 6 a.m. on June 9, Silvestro took the lead, finding the terrain difficult but the rock quite sound. At 12:30 p.m. we reached the top of the pillar at 5,780m, a snow dome too small to allow us to take a selfie. We were tired and started rappelling carefully into the mist, trying to make no mistakes. Before dark we had returned to Vedetta Camp, bringing down our ropes (and the old ropes), so the wall was left clean. We were pleased to have climbed the entire route without recourse to bolts. We named our 22-pitch route on the 800m pillar Via dei Trentini (VIII A1 M4+). I didn’t think we would climb this pillar, but due to the strength and endurance of a great team, we are pleased to have written a small page in the history of these great Himalayan mountains.

Editor’s note: In 1992 the Italian team of Sonja Brambati, Adriano Carnati, PierAngelo Tentori, and Paolo Vitalli planned to attempt the pillar, but almost constant bad weather and caches buried by snowfall meant they hardly got started. As time began to run out, they turned their attention northward and made the first ascent of Bugjan, a summit of around 5,600m.

In 2014 Andreas Abegglen, Thomas Senf, and Stephan Siegrist from Switzerland climbed a hidden couloir on the left edge of the pillar and continued to the east summit at 5,895m (the first ascent of this top) to create Challo (AAJ 2015). The precipitous main wall between the Swiss and Italian routes will provide a future party with a taxing big-wall ascent.