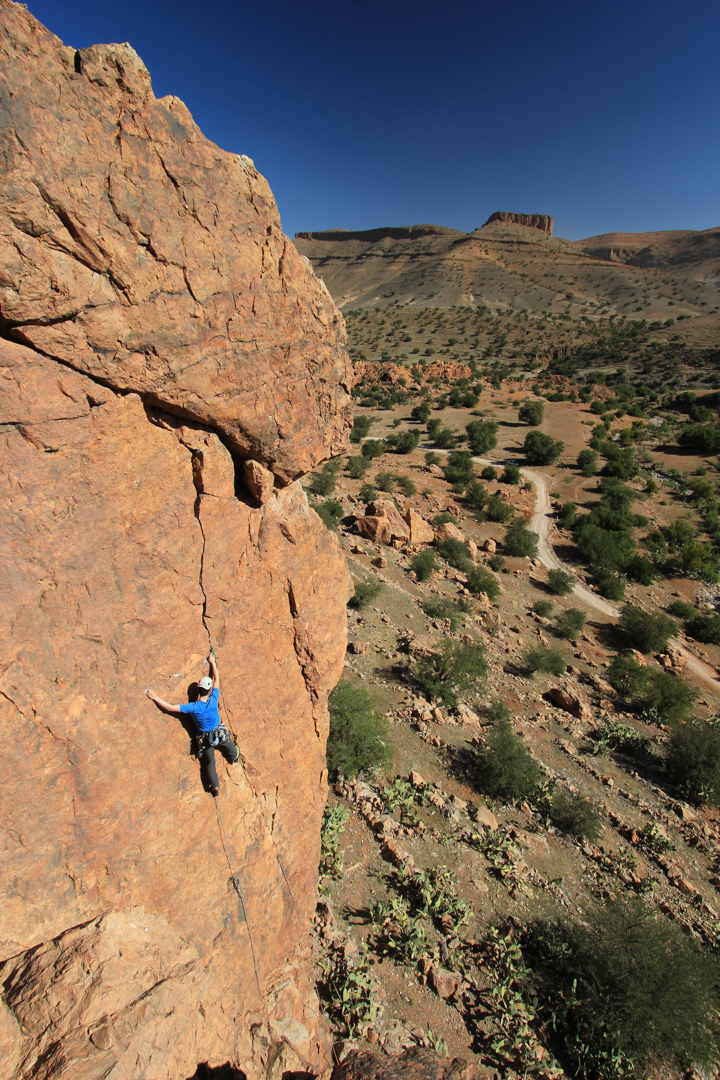 The climbing potential of the Anti-Atlas Mountains was first explored in 1991 by British climbers Les Brown and Trevor Jones, when the first Gulf War diverted them from a planned climbing trip in Jordan to the ancient market town of Tafraout, on the northern fringe of the Sahara. Throughout the 1990s, there followed extensive development by a team of well-known veteran mountaineers, including Sir Chris Bonington, Joe Brown, Derek Walker, and Claude Davies, who wrote the area’s first guidebook in 2004. Today, although the secret was slow to get out, Tafraout is fast becoming something of a rock climbing mecca, particularly for British and northern European climbers, for whom it offers high-quality traditional climbing with reliably good weather throughout the winter months.

Given the background of Tafraout’s early developers, it is no surprise that climbing here has maintained a very traditional adventure ethic—in contrast to the predominantly bolt-protected climbing that exists around much of the Mediterranean coast. The rock is high-quality quartzite, offering superb, positive handholds and good natural protection. This has produced satisfying low- to mid-grade routes in a remote mountain environment. Indeed, although numerous hard lines have been climbed, it is the lower-grade climbs for which Tafraout is becoming popular, and a number of long, adventurous climbs have already become established as classics of the region.

The Great Ridge (2,600’, HVS/5.9) was the first of the big routes to see an ascent, back in 1998 at the hands of Les Brown and Pete Turnbull, before attention shifted to the northern side of the massif. There, on the huge cliffs above Asseldrar, Guy Robertson and Trevor Woods climbed Adventures Beyond the Ultraworld (1,200’, E5/5.12a) in 2003—this remains one of the hardest routes in the range.

Between 2007 and 2011 there was an explosion of new route activity. This period saw the first ascent of the now very popular Pink Lady (750’, VS/5.7) on Afantinzar’s Grand Wall, by Pete Johnson and Lun Roberts. In Samazar, home to some of the biggest cliffs in the Anti-Atlas, Jim Fotheringham and Mike Mortimer climbed the Great Ridge of Samazar (1,700’, VS/5.8). Alongside this route is one of the most sought-after routes in Tafraout: Labyrinth Ridge (2,600’, VS/5.8) on Samazar’s Great Rock, climbed by Steve and Katja Broadbent in 2008.

Today there are in excess of 2,000 documented climbs within one hour’s drive of Tafraout, with new routes still being reported at the rate of about 150 per season. Most of these are on easily accessible crags and are between one and three pitches, spanning the grades from 5.6 to 5.12. More route information, maps, and guidebooks are available from the Oxford Alpine Club at www.climb-tafraout.com.