Melanie Grünwald (21), James Lam (21), Katharina Pfnaisl (23), and I (46) wanted to be the first to cross the central section of the Zaalayskiy Range, taking in the main summit of Kurumdy I (6,613m), a mountain climbed only once before. [Kurumdy I was climbed October 12, 2001, by Vitaliy Akimov, Alexander Gubayev, Mikhail Mikhailov, and Oleg Turayev by the north spur and east ridge. Despite previous reports that the mountain was first climbed in 1932 from the south by Nikolay Krylenko’s expedition, it now seems most likely they reached the summit of 6,154m Kurumdy Southwest II.]

We located base camp at 3,770m beyond the western moraine of the East Kyzylsu (Kyzilsy) Glacier, and on July 14 put advanced base at 4,100m to the southwest. Next day we made our first acclimatization climb, Ekishak (5,155m, first ascent 2006), spent one more night in advanced base, and then descended to base camp, where we remained for several days. We installed our next high camp at 4,800m, positioned for an ascent of Gorlova Orla (5,440m). Melanie had been fighting an illness since Osh, so she remained in camp on the 20th while James, Kathi, and I climbed Golova Orla by the north flank and east spur, a new route. This was mainly 50° but ended with a huge, vertical, rotten summit cornice. This was only the second ascent, the first taking place in 2000, when a British-Russian team climbed the northwest ridge.

On July 26 we headed for the main ridge between Zarya Vostoka (6,349m) and Kurumdy East II (6,259m). Two days later we were at a 4,500m high camp, where the forecast for the coming nine days and Melanie’s continuing illness caused her and James to abandon the ascent. Kathi and I opted to continue. After another night at 4,500m, we set out with provisions for eight days, with rucksacks weighing about 30kg each. At times we needed to wade through hip-deep snow, sometimes making no more than 10 vertical meters an hour. We made a camp on the north flank before reaching the crest on August 1 at ca 6,000m. The view was poor as we progressed westward to a camp at 6,120m. Next day we reached the previously unclimbed Kurumdy East II, naming it Pik Kathi. It was the first 6,000m peak she had climbed.

In knee-deep snow we continued along the ridge toward Kurumdy East I (6,384m), making another two camps en route, the latter because of complete lack of visibility. We had now spent our proposed eight days on the traverse. However, next morning the visibility was a little better and this spurred us on. We reached East I quickly, descended the far side, and joined the route of the first ascensionists of Kurumdy I.

In increasing wind we crossed the three Kurumdy Sharqi peaks to a camp below the ridge leading to the main summit. Next morning, August 5, it was very cold and windy, but by 3 p.m. we reached the highest point of the range, and as a reward the sky began to clear and we soon had a perfect view in all directions. What a gift!

We continued to the west, crossing another small top of 6,585m, which might be considered a previously unclimbed summit, and a few hours later were preparing camp below the striking double summit of Kurumdy West I. In barely two meters of visibility we reached its northern top (6,554m), but due to the bad weather we decided to forego the higher south top (6,558m, possibly unclimbed). Instead we headed down the west flank of the ridge and over Kurumdy West II (Chorku, 6,283m, first climbed in 2000). We stopped at 6,150m, at the junction of the main ridge and a spur that descends north over Peaks 5,532m and Golova Orla. That night was extremely windy, and by next morning the tent had been ripped in several places.

Next day we descended the spur, and yet again it took far longer than anticipated. We ended up having to camp close to the top of Golova Orla, and it took us until after dark the following day, reversing our previous route on the east spur, to reach advanced base, where we were very happy we’d left a little food, clothing, and gas. Base camp had little to offer us, as we had previously agreed that Melanie and James would try to remove most of the stuff on their departure. Ultimately, our traverse took 15 days: ten to the main summit and five on the descent. It was exciting, exhausting, and beautiful. 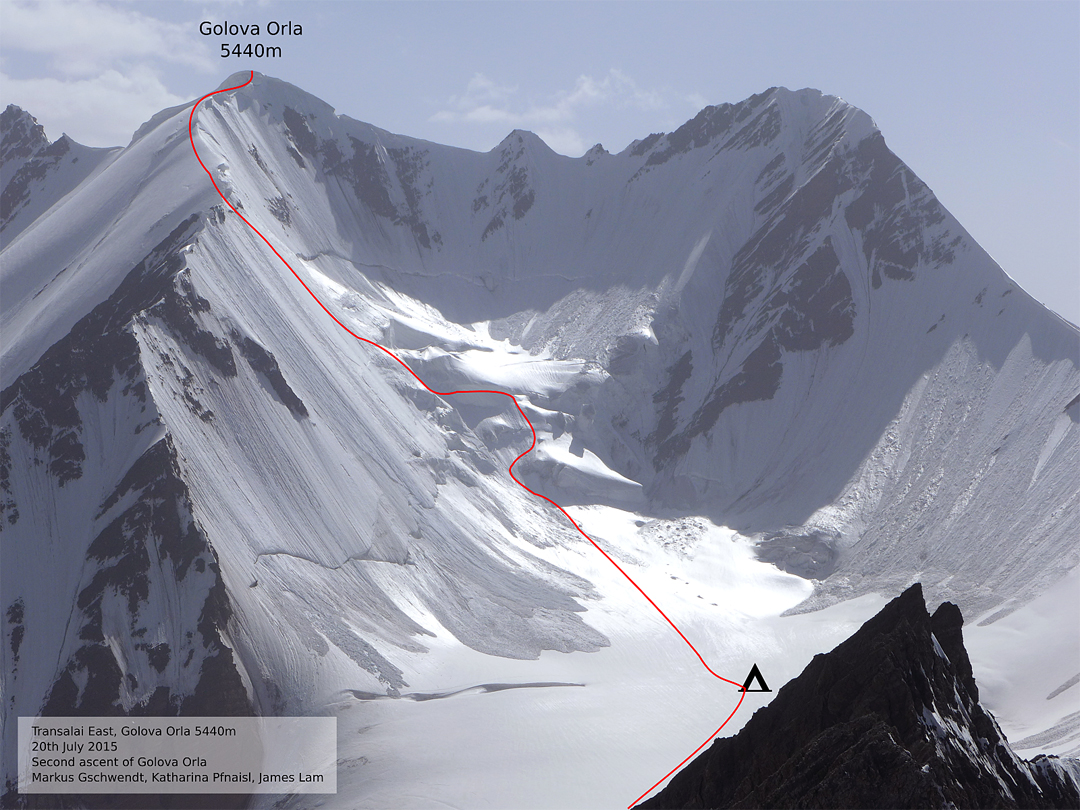 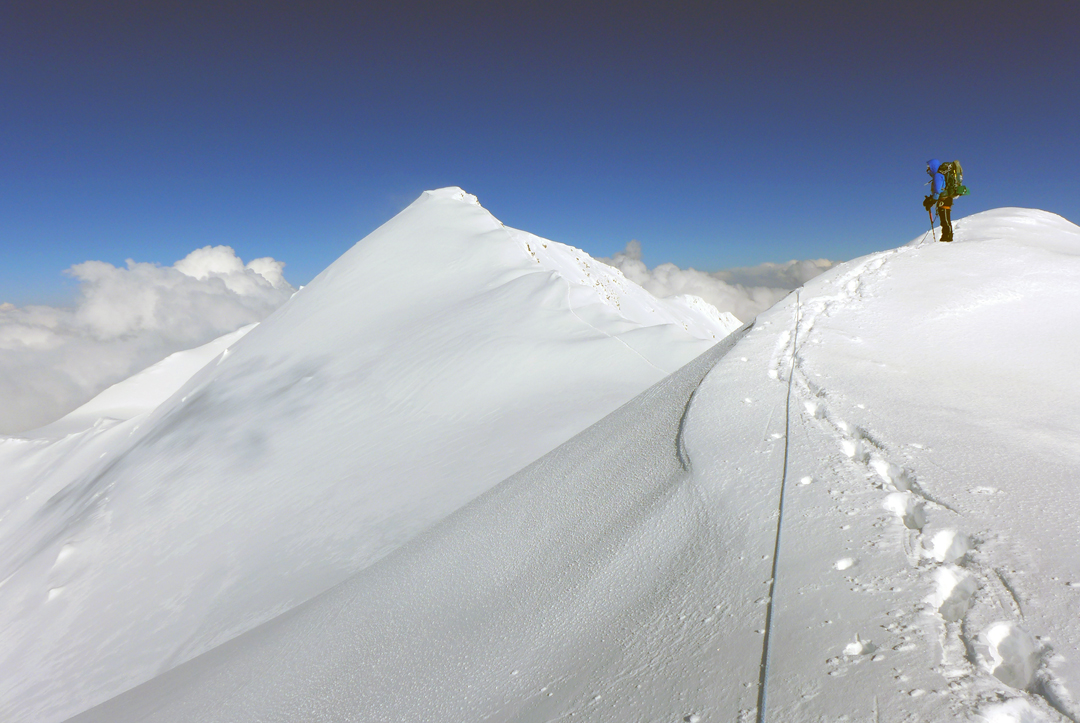 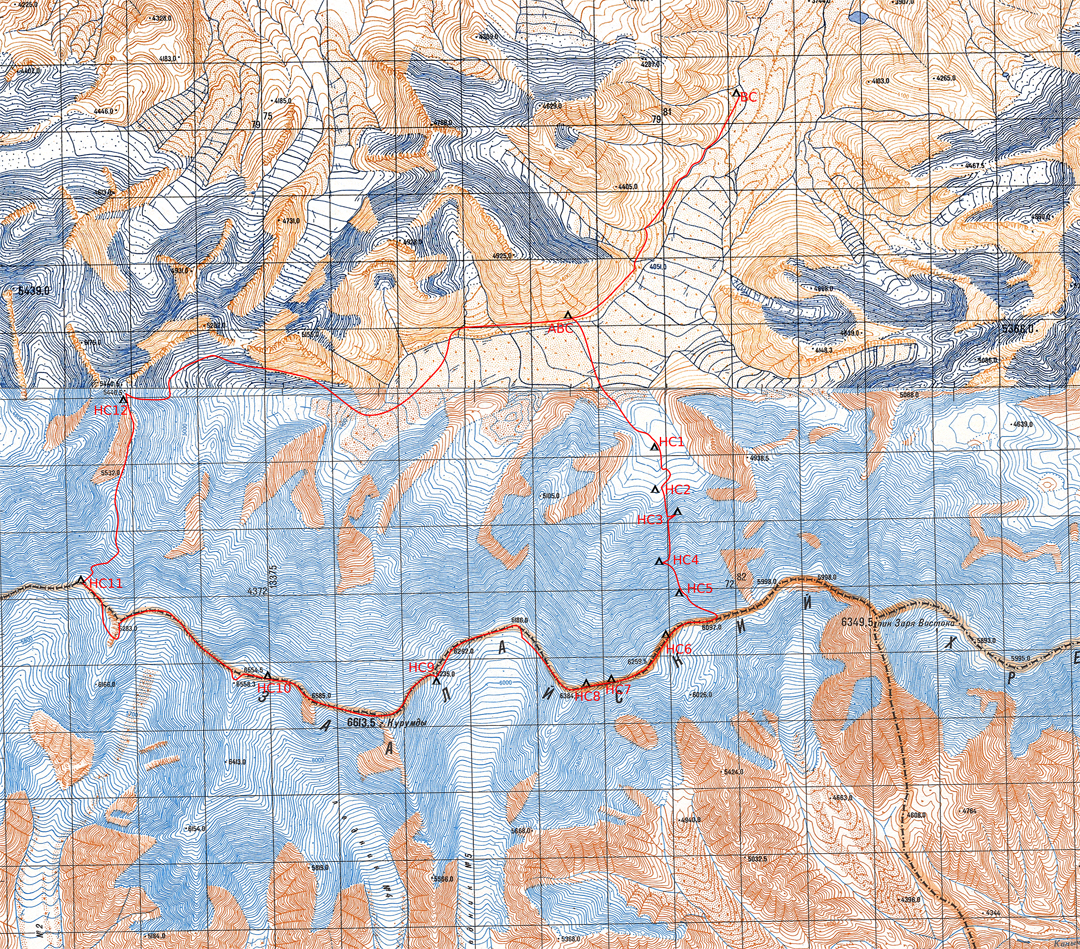