On August 30, Juan Gabriel Estellano (Bolivian), Lilén Sosa (Argentinian), and I established a new route on the tallest granite tower of the northern ridge of Jati Khollu (5,421m). The route is best approached by heading up the Irpavi Valley from Zona Sur in La Paz. On reaching Palcoma, the road crosses the river on the right and heads up the valley to the east. About an hour and a half from La Paz, we parked the car 500m before the road head, then walked for three and a half hours up the valley on the left (west) of the long ridge falling southwest from Jati Khollu (the first valley left of the normal approach via Laguna Jachcha Khasiri). We reached a pass at a little over 5,000m on the watershed between the Amazon basin and Andean highlands, then headed up right for 100m toward the northern ridge. Two 150–200m granite towers come into sight at the very end of this lengthy approach.

We climbed the most obvious line on the left tower (16°25'27.86"S, 67°56'14.15"W), starting with a 30m pitch of 6a+ up a wide cleft filled with granite slabs that formed parallel, 3cm-wide cracks. Above, the cleft widened and was filled with astonishingly firm chockstones that we climbed around to reach the second belay under a roof (35m, 6a). The third pitch is the most extraordinary I have ever climbed, as the crack widened into a chimney and then formed a tunnel, the outside edge comprising loose blocks. The chimney was relatively easy (40m, 5c) but protection was scarce. Amazingly, Juan Gabriel found a little ledge for a belay at the tunnel exit. The fourth pitch (6a) was slab climbing with little protection. We finished this pitch just above a big platform, where I managed to change the equilibrium of a block of the size of a large refrigerator. It fell and cut through the middle of one of our ropes, then hit the wall below once on its journey to the ground. Our final pitch (30m, 5b) was necessarily short; it led to the summit at ca 5,280m. We then made four shorter-than-planned rappels in the gully south of the summit, between the two towers, before carefully scrambling down to the foot of our tower.

The name of the route, Fu-Man-Chu, is the derived from the “Rock, Paper, Scissors” game we use to determine who starts leading. We left La Paz at 3 a.m. and arrived back there at 10.30 p.m. 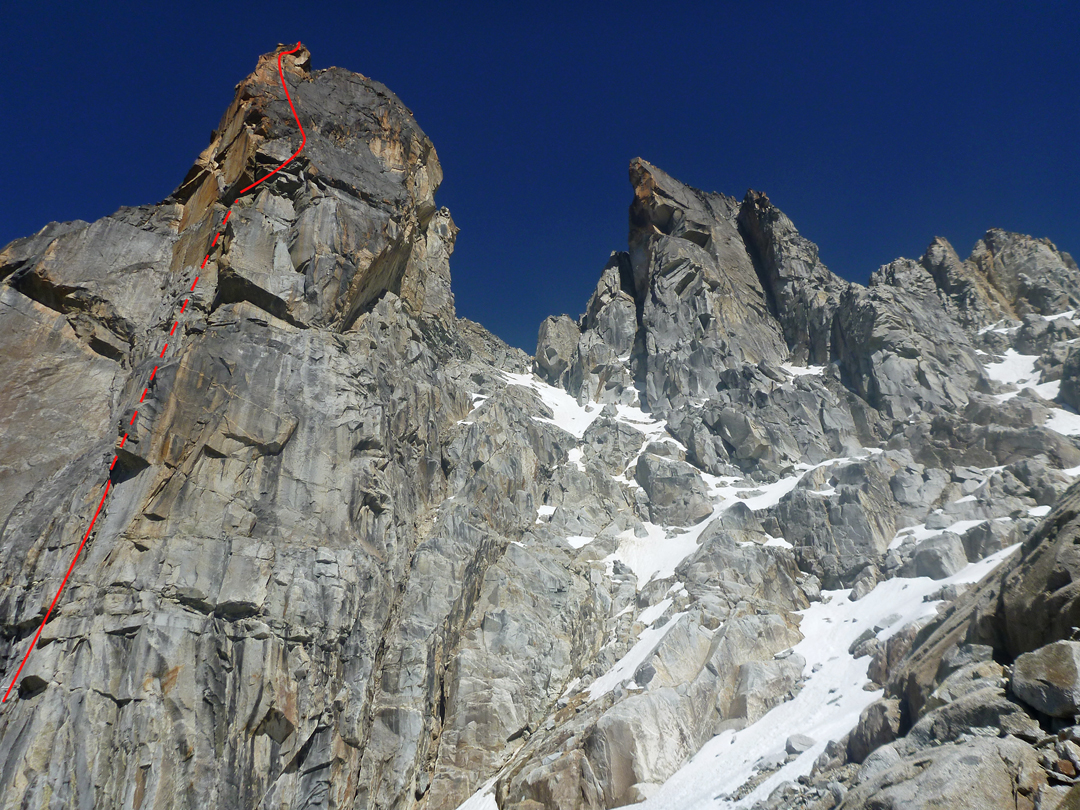 Fu-Man-Chu on the tallest granite tower of the north ridge of Jati Khollu.
Alexander von Ungern
Previous Next

Fu-Man-Chu on the tallest granite tower of the north ridge of Jati Khollu.
Alexander von Ungern
Previous Next