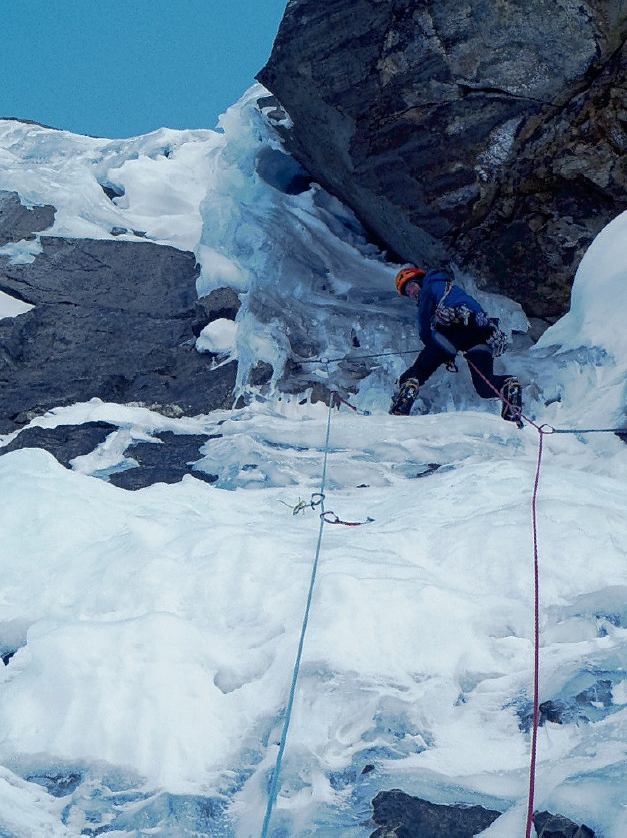 Ben Silvestre and I spent March 25–April 13 in the Revelation Mountains. Our initial objective was the central couloir on Pyramid Peak. However, landing on the melted-out Revelation Glacier was out the question. We re-routed to try the unclimbed north face of Jezebel (9,650’) from the Fish Glacier. Once we’d arrived at base camp and checked out the north face, we focused our efforts on Jezebel’s more easily accessed east face.

On March 29 we made our first attempt on the face but were forced down by a difficult step of steep, thin ice on the third pitch. After bailing we spent the remainder of the day reconnoitering the rest of the face. After some poor weather we set out again on April 2, planning for a two-day climb. We chose the same prominent gash/couloir in the center of the east face, but this time we came prepared with 14 ice screws instead of eight. The thin ice pitch was still difficult and proved to be the crux of the route (WI6).The fourth lead climbed another steep section of thin ice, and the fifth took on a steep, snow-filled chimney (M6 A0). Above these initial difficulties we gained the couloir feature and climbed a few hundred meters up a straightforward gully. We found a good bivy spot on the right side of the couloir that evening.

The next day a couple of easy pitches up a snow ramp led us to the base of an excellent, steep ice chimney we nicknamed the Ice Pencil. This was maybe the best pitch of the route and reminiscent of Exocet on Aguja Standhardt. A few more pitches up mixed ground led us to the top a tower we jokingly named the Tower of Commitment. To continue from the tower we had to rappel, and we left one of our ropes to re-ascend on our way back. A straightforward snow gully led us to the unclimbed east summit (9,450’) of Jezebel just before dark. We descended a few pitches that evening and chopped a sitting bivy.

In the morning we ascended our rope back up the Tower of Commitment and then downclimbed and rappelled the remainder of our route, arriving just before dark on the third day. We called our route Hoar of Babylon (1,200m, WI6 M6 A0). Though we hoped to climb another route, a large snowstorm kept us tent-bound. We thought the granite on the east face was of the highest quality and, if accessed via helicopter in the summer months, would offer countless rock objectives.