Thanks to an Alpine Club symposium in 2012 and information from past expeditions, identifying objectives in the Western Kokshaal-Too proved to be straightforward. The main goal for our six-member British team (Scott Gillespie, Huw Goodall, Robert Middleton, Hannah Moulton, Ian Peachey, and me) was the first ascent of Little Poobah (5,481m, 41°01’00”N, 77°29’20”E), a summit to the east of Grand Poobah (more properly Peak Byeliy, 5,697m).

We found the services of I.T.M.C. to be excellent, and their six-wheel-drive Russian UAZ trucks certainly lived up to their reputation, as our driver skilfully delivered us straight to 4,100m on August 8, leaving us with relatively pain-free, mostly downhill carries to a 3,400m base camp at the start of the Fersmana Valley (41o 08’19N 77o33’21E). The only snag was crossing the sporting glacial meltwater rivers.

With base camp established around 3,400m, we were able to get on with the mountaineering, and after negotiating some wild hummocky moraine one team bagged the first virgin 4,645m peak by the west ridge (F). Next up was an unclimbed 4,780m peak that had caught my eye from base camp. We ascended the 600m west couloir, which was guarded by three bergschrunds that led us onto dinner-plating ice up to 70° (possibly D). Summit celebrations were dampened by the deteriorating weather approaching from the south; we changed our descent plan and headed north over a three-mile PD+ ridge, which took in a further two unclimbed summits before darkness and blizzards forced us to descend to our high camp.

Snow then fell for three days on the larger mountains. Once the snow had retreated sufficiently from the limestone faces above base camp, two of the team climbed a 350m HVS. The following day one team crossed the Sarychat River to establish a high camp, while the other made the long wade up the Fersmana Glacier to establish a high camp below Little Poobah. Unfortunately the weather remained too cold for any significant consolidation of the snowpack, which consisted of a thin breakable windslab crust on top of knee- to thigh-deep unconsolidated snow. Gut instinct suggested these were not the conditions to be attempting our intended southwest-facing gully, and later observations of avalanche activity confirmed this. Fortunately the other team had been more successful and summited an unclimbed 4,753m peak that day (PD), with a further 4,849m unclimbed peak the following day via the 350m west face (AD).

Little time remained before we had to start carrying everything out to the pickup point, so our attention returned to the limestone faces above base camp, with a further three new routes up to 460m and HVS 5a. All in all a successful expedition, which was the first taste of mountaineering in the greater ranges for most of our team! 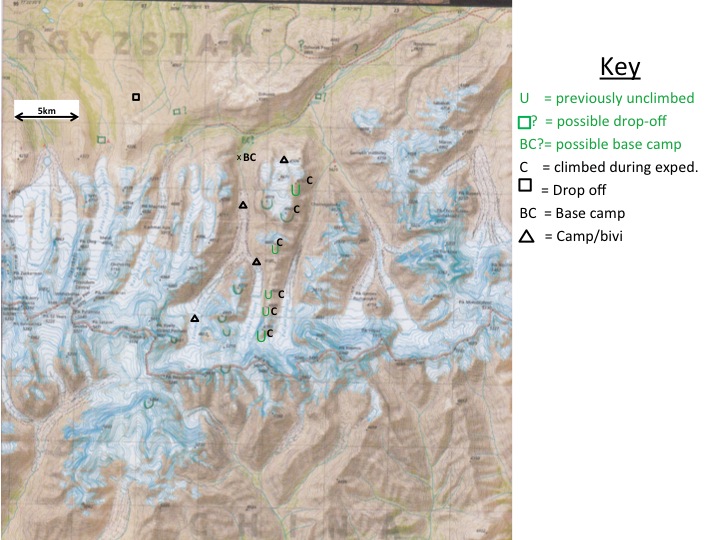