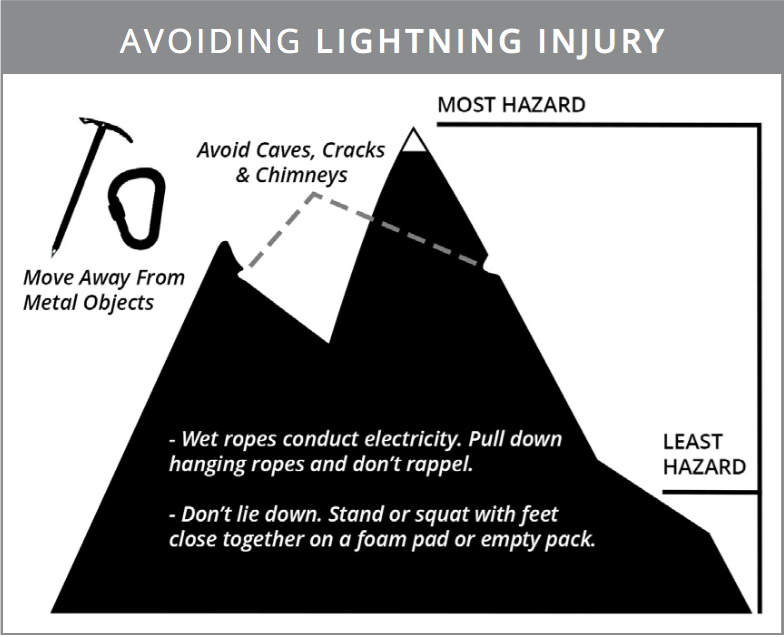 On August 9 my partner Matt and I (both 26) attempted to climb Bear Creek Spire via the North Arête (6 pitches, 5.8) in a single-day, car-to-car push from the trailhead at Mosquito Flats. The weather report called for a 20 percent chance of scattered thunderstorms after 11 a.m.

We started up the route at around 9 a.m. At this time we had bluebird skies and good temps. We made it to within about 200 feet of the summit by noon, when the weather quickly took a turn for the worse. Clouds began rolling in from the west, and it soon began snowing and hailing, with rolls of thunder in the distance. Our situation was difficult: We were between the North Arête and Northeast Ridge routes, on fourth- and fifth-class terrain and fairly close to the summit ridge. I was aware of only two descent options. The first and most ideal was a rappel from the summit blocks, which we ruled out due to the danger of continuing upward; second was a descent by the Northeast Ridge. We resolved to downclimb and rappel the latter as quickly as possible.

Shortening the rope, we began simul-climbing in worsening conditions across the face between the North Arête and Northeast Ridge, and then down the ridge itself. Several things then happened in rapid succession, and the sequence is difficult to piece together. On the ridge, Matt told me he could hear the rock humming, and we became increasingly frightened. We unroped. I saw flashes of light on some nearby rocks. I was looking at Matt and saw what looked like a very small explosion (like a firecracker) on or near his helmet. I could smell smoke, sort of like gunpowder. He said, “I think something just happened to me.” We continued downclimbing, unroped, on snow- and hail-covered rock.

After descending 100 feet, we experienced thunder and lightning in increasing intervals. Soon there was no lapse between flash and sound. We were panicked and felt extremely exposed. At some point in our downclimbing, we found a small cave. We both crawled into it. I asked Matt if he had been struck by lightning, to which he responded that he had. He described feeling a “buzzing” feeling in his head and that he could smell burning in his nose. He then showed me a small burn on his thumb, where the charge appeared to have left his body. He otherwise displayed no symptoms.

As we waited in the cave, I began to experience the first symptoms of hypothermia. I had trouble accomplishing simple tasks, like coiling the rope or stowing my climbing rack. We were soaked and the temperature had dropped dramatically. The lightning began to ease, and even though it was hailing heavily we made the decision to continue down. After five to ten minutes without lightning or thunder we made a break for it. We downclimbed the ridgeline for another 100 feet and then rappelled to the steep talus field below. From here, we were able to climb off the Northeast Ridge.

I have WFR certification, and I made some basic assessments of Matt’s condition on the ground, mostly concerned about any changes in level of responsiveness and behavior. This was done rapidly and mostly on the fly. He displayed no symptoms other than singed nose hair and pain in the burned finger. With clothes on and calories in, we warmed up quickly as we hiked, and we made it back to the car in good health.

We should have sought cover when the clouds first appeared. Although the storm developed rapidly, we might have been able to find some immediate shelter. Our second mistake was trying to descend exposed ridgeline in the heat of the storm. However, we both felt extremely exposed on the upper part of the mountain and in danger of severe hypothermia should we just try to “wait it out.” Matt is projected to have permanent hearing loss in one ear. (Source: Nick Thurston.) Note: An interview with Nick Thurston about this incident was featured in Episode 6 of the Sharp End podcast.

[Editor’s note: These climbers made tough choices in a serious situation. Descending as soon as the storm approached was a good decision, since the risk of lightning generally is highest near summits. Despite their concerns about hypothermia, taking shelter in the cave was risky. Lightning will jump the gap from the ceiling to the ground below, using a human body as the conductor. The climbers got away with it this time, and the cave might have helped stave off hypothermia, but they were lucky.

When caught by lightning, climbers should attempt to get off high points and ridgelines, and pull the rope if it’s hanging overhead, because a wet rope will conduct current (do not rappel in a lightning storm). Keep away from any metal gear, and stay out of cracks or caves. Stand or squat on a foam pad, empty pack, or rope. Minimize contact with the ground—keep your feet together and do not lie down. If forced to shelter in a cave, stand or squat inside, away from the entrance, keeping as much distance between your head and the ceiling as you can without sitting or lying down.]