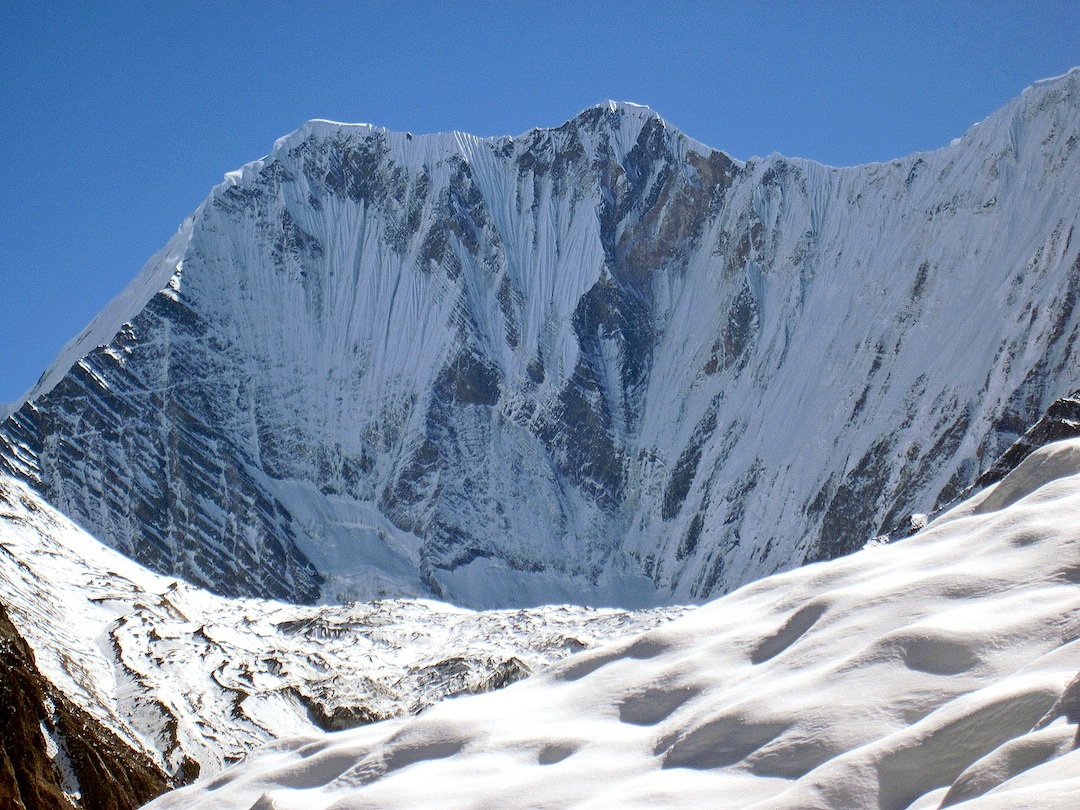 After a successful expedition to Kyrgyzstan in 2012, I put the idea to Alek Zholobenko (U.K./Russian) that we should find an unclimbed north face in the Himalaya with a summit not exceeding 7,000m, due to our lack of altitude experience. On top of this it should have a base camp on grass next to a little lake, and clean running water. But then it should not be too far from the mountain, and the route should be around TD, with ideally nothing harder than Scottish 5. So by this point you’re probably thinking this is a ludicrous idea, and Alek would have agreed, but due to his like of expeditions he started researching. Our chosen objective became Patrasi (6,450m), a sub-peak northeast of Kande Hiunchuli (6,627m).

Flying to Jumla via Kathmandu, we walked for four days to 4,500m in the Chaudhabise Valley, where deep snow due to Typhoon Hudhud made it impossible for our porters to continue. We continued alone, moving all our equipment in two 55kg loads, to a col at 4,942m, then threw our bags down the other side and slid after them to the floor of the Chyandayng Valley. Here, on October 24, we established base camp at 4,200m.

From base camp we had to ascend 900m to the glacier, through deep snow over nasty scree. This took two days, and by this point we were bivouacking, a decision we had come to in the U.K. to allow us to go light. The temperature at night fell to below -20°C.

The approach to the bottom of the west-northwest face of Patrasi was slow, post-holing through thigh-deep snow. Two days later, on the second of which we managed an excellent pace of 50m an hour, we reached the start of the 1,000m main face and technical climbing. It was October 30, the altitude was 5,400m, and at that point Alek realized he could not feel his toes. On removing his boots, he found he had mild frostbite on both big toes.

Back at base we decided to evacuate the area via the previously unexplored river valley below camp. If nothing else this would ensure Alek’s toes did not refreeze while crossing the col. Our sacks were ca 40kg. It took four days to work through a narrow canyon, prompting me to remark one night that, “when I said that I wanted an expedition that made the last one look tame, this is not what I had in mind.” On the second day we covered a whole 2km, but by the end we were on scary hunter’s paths and began to move quicker. We finally reached Dolphu in Mugu district, where we were invited into homes, something that, due to the restricted nature of this area, few Westerners have experienced. We eventually flew out from Rara Lake.