Nikita Balabanov, Viacheslav Polezhaiko, and I, all from the Ukraine, established base camp on the Morimoto meadow at 4,600m, opposite the northwest face of Langshisa Ri (6,412m), in October. From here we crossed the glacier and ascended 200m on moraine to an advanced base, just to the right of an icefall and below the central spur on the northwest face. During acclimatization, this approach took one and a half to two hours. At the end of our acclimatization phase we were hit by a huge snowfall at base camp—the same storm that produced tragic consequences in the Annapurna region. One meter of snow fell in two days.

One day after the storm ended, we set off for advanced base. Due to large amounts of fresh snow, from knee- to waist-deep, this took 12 hours. We considered taking a rest day, but decided not to waste the good weather and started climbing early next morning, October 17. Our equipment included two climbing ropes, one static rope, four ice tools (the second and third climber used one tool each), five days of food, and a satellite phone. We packed a bolt kit and aiders but used neither.

On the first day we reached the bergschrund at 4,900m, then moved into the couloir between the two main rocky ribs. We climbed together up this (fresh snow over rock slabs; 30° at start, rising to 60°), as there was almost no possibility of placing protection. Toward the top we slanted up to the left-hand rib, and at 3 p.m. reached the snowy crest, where, at 5,500m, we were able to shovel a tent platform for the night.

Day two marked the start of the technical climbing: snow-plastered rock slabs and poor ice. The leader spent much time removing fresh snow to find cracks for ice tools and crampons, and protection amounted to no more than four pieces in a 60m pitch. That day we climbed five pitches at M4/5 and 60–70°, and camped beneath a big rock buttress at 5,700m.

Next day we climbed six pitches, the leader often using the shovel and two tools for progress. Sometimes there was a meter of snow over rock, and the leader was not able to move until he’d thrown all this down on the head of his belayer. There was one particularly scary pitch on thin, hollow crust over slabs. Difficulties were again M4/M5 60–70°. At ca 5,900m we reached the start of the upper spur, where we bivouacked. On day four we climbed two pitches of M4, then four pitches of waist-deep snow, with sections of ice (WI 3/4 60–70°). On our fifth day we climbed snow and ice slopes of 50–70° with no protection. The main belay was mostly the leader sitting in a large hole he had dug. There was one pitch of perfect ice (WI 3/4), but it finished with no belay. That night we reached the large snowfield 200m below the top. The following day we slanted right to the shoulder on the southwest ridge, the leader having to shovel through chest-deep snow. Fortunately, from the shoulder, good névé led to the summit, which we reached at 11 a.m. on October 22.

The same day we returned to the shoulder and then descended the standard route on the south face to 5,700m, at first downclimbing and then rappelling ice sections from Abalakovs. Next day we continued down the face, then trekked around the mountain and back up to base camp, which we reached at nightfall. We’d had to stretch five days of food to eight and were therefore rather hungry. We named the route Snow Queen (1,500m, ED M5 WI4) after the Hans Christian Anderson tale, the large amount of snow on the approach and route, and the constant cold on the northwest face. 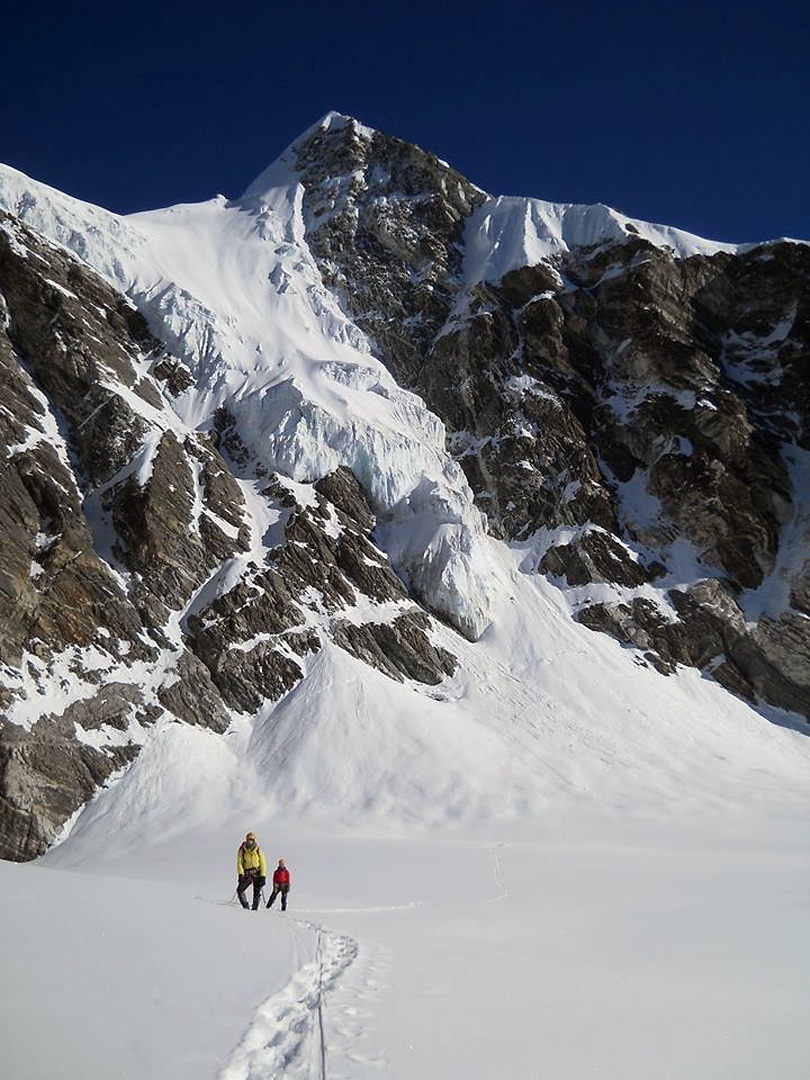 The south face of Langshisa Ri, which the Ukrainians descended from the shoulder left of the summit.
Supplied by Anna Piunova 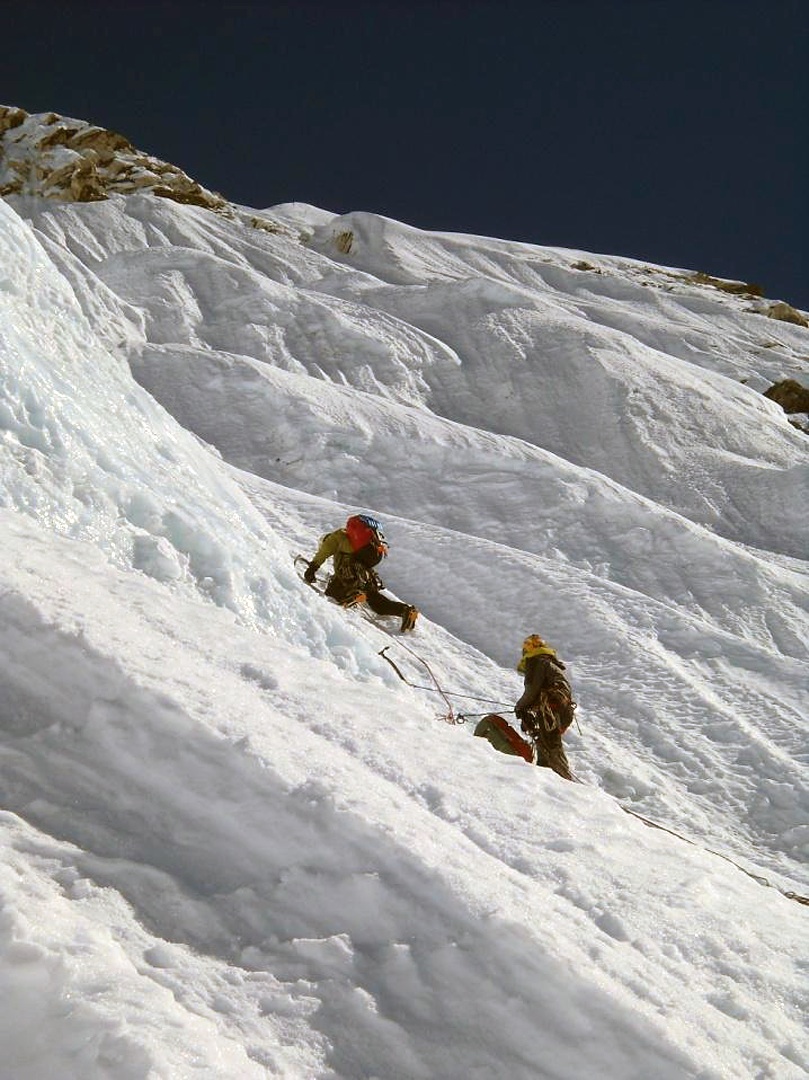 On the upper northwest face of Langshisa Ri.
Supplied by Anna Piunova 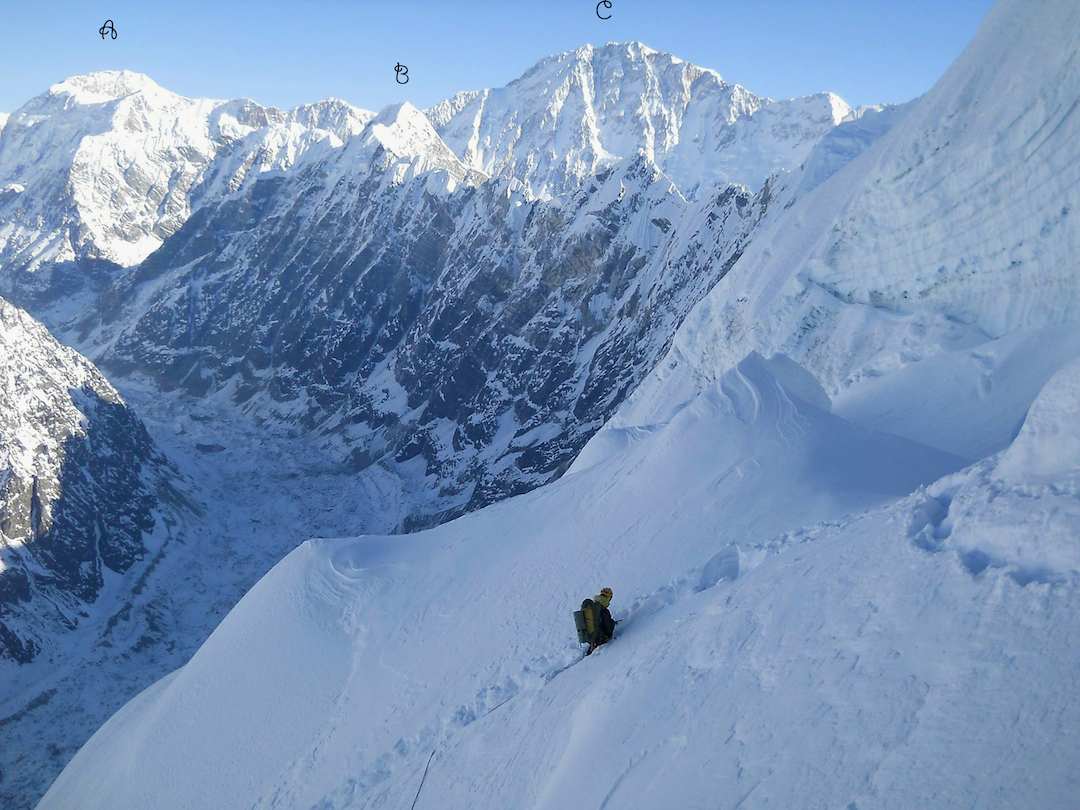 Nearing the top of the central spur on the northwest face of Langshisa Ri, with the Langtang Glacier below. (A) Risum (7,133m). (B) Pemthang Ri (6,842m). (C) Xixabangma (Chinese map 8,012m, with south face clearly visible.
Supplied by Anna Piunova
Previous Next

The south face of Langshisa Ri, which the Ukrainians descended from the shoulder left of the summit.
Supplied by Anna Piunova

On the upper northwest face of Langshisa Ri.
Supplied by Anna Piunova

Nearing the top of the central spur on the northwest face of Langshisa Ri, with the Langtang Glacier below. (A) Risum (7,133m). (B) Pemthang Ri (6,842m). (C) Xixabangma (Chinese map 8,012m, with south face clearly visible.
Supplied by Anna Piunova
Previous Next