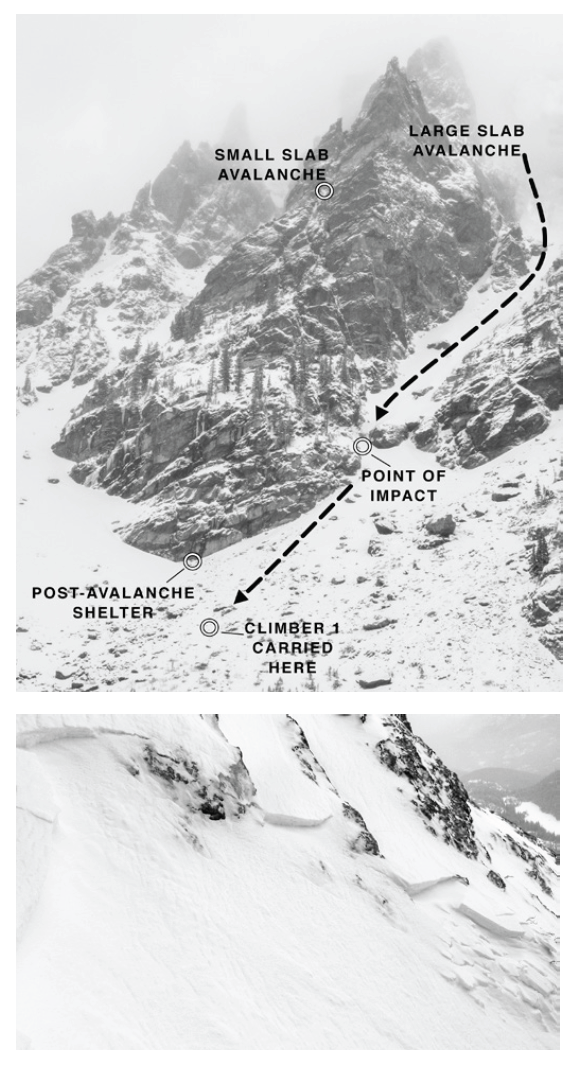 About 3 p.m. on November 21, two climbers were ascending Enter the Dragon (AI4 M4 Steep Snow) on the southeast aspect of Dragon’s Tail Spire. The leader (Climber 1) was about 60 feet below a fixed anchor at the end of their third pitch when he triggered a wind-slab avalanche on the snow slope above. Climber 1 just managed to stand his ground as the slab overran his position, and Climber 2 was not hit because he was protected by overhanging rock. Climber 1 finished the pitch and tied into a fixed anchor, and then brought Climber 2 up. The crown at the point of release measured eight inches, and the slab was approximately 60 by 60 feet. At this point, both climbers knew it was time to get off the route and they began rappelling down the route toward the Dragon’s Tail Couloir.

By about 5:30 p.m., Climber 1 had rappelled relatively low into Dragon’s Tail Couloir. After taking a few steps down the slope, he heard a noise like a freight train high in the couloir above. Climber 2 was still tied into a tree anchor above. Climber 1 looked up and saw a wall of white five to ten feet high come over a prominent rock band. Climber 1 buried his axe and his crampons and prepared for the hit. A half second later he was cartwheeling down the slope, engulfed by the slide. After fighting to stay on top, he popped to the surface after being carried nearly 500 feet. A few seconds later he heard another roar and was hit by another slab avalanche and carried farther down the couloir, but he was able to log-roll off this slab into a rocky shelter against the couloir’s edge.

Climber 2 watched Climber 1’s headlamp light disappear as he was carried down slope in this large, naturally triggered avalanche. After the slide stopped, Climber 2 waited for the second slide to run its course before rapping down to find Climber 1 dazed, hyperventilating, and coughing blood, but otherwise uninjured. Both climbers ascended the slope to retrieve their rope before descending and hiking out to their car. The avalanche debris was waist- to neck-deep and ran the width of the couloir. Among the debris, the climbers noted one-foot-thick chunks of wind slab in addition to wet storm slab, suggesting heavy wind-loading high on the southeast aspect of Flattop Mountain. (Source: Colorado Avalanche Information Center.)

The climbers knowingly chose to climb this route during a storm. Both climbers were adept in self-rescue and wilderness medicine, educated in avalanche safety, and familiar with the terrain at hand, having previously climbed the same route and other routes on the Flattop Mountain massif. On the day of the climb the avalanche danger scale read low to moderate for all aspects and elevations. A melt-freeze cycle the week prior had created excellent climbing conditions on route, and both climbers noted a consolidated, spring-like snowpack above tree line during their initial approach up the Dragon’s Tail Couloir and on the first pitches of the climb. They did, however, underestimate the potential for wind loading caused by high winds during the previous days, which appeared to form thick wind slabs on top of the melt-freeze crust at higher elevations. On route, the climbers noted that it began to snow very hard around 2 p.m., with accumulation reaching nearly a foot by 5 p.m. Unusually for late November in the Colorado high country, the snow was wet and heavy. This rapid buildup of wet storm snow, coupled with dangerous wind-loading, conspired to create a perfect storm of deadly conditions for both human-triggered and natural avalanches.

The southeast aspect of Flattop Mountain, where these avalanches occurred, is ripe for similar avalanche events. Despite numerous avalanche accidents here, it remains one of the most popular winter playgrounds for skiers and climbers in all of RMNP. Climbers entering an alpine environment like this in winter should be able to identify avalanche terrain, be familiar with safe travel in avalanche terrain, have good decision-making and rescue skills, and carry the appropriate self-rescue equipment. Don’t underestimate the rapid buildup of storm snow on steep slopes or become complacent with familiar terrain. (Sources: Climber 1 and Aram Attarian.)