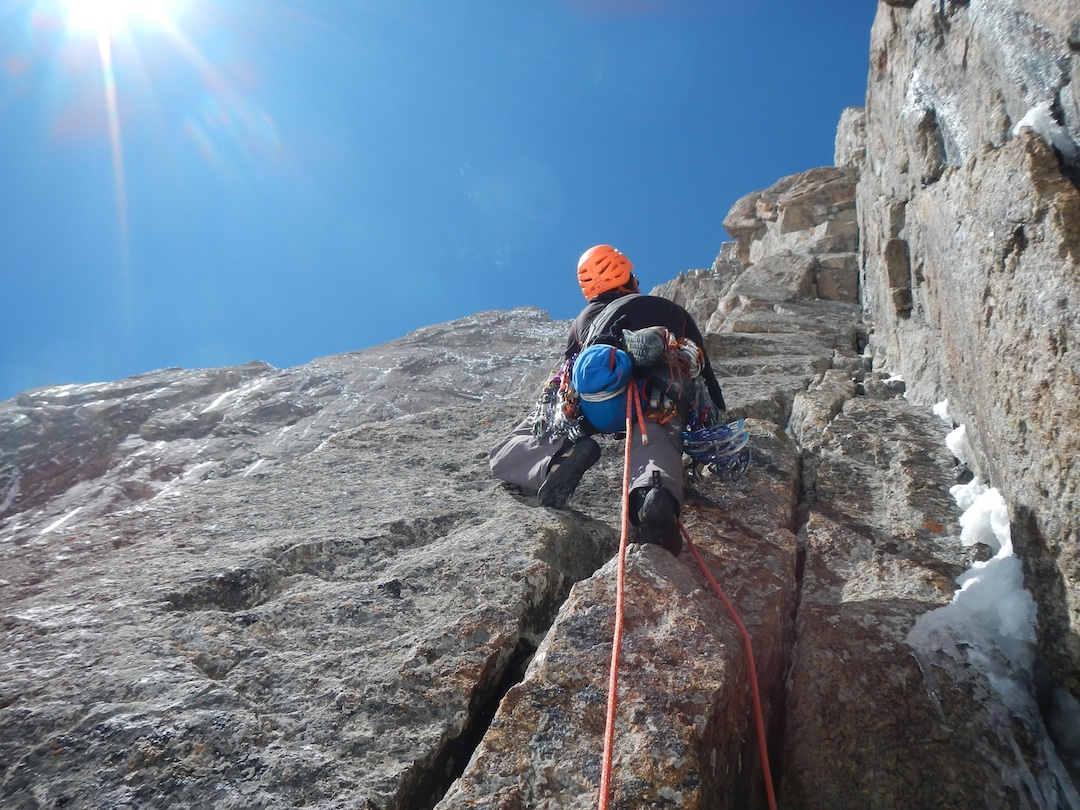 In late August, Rafael Caceres, Nicolas Navarette, Carla Perez, and I climbed a new route on a pillar to the right of the main east-southeast face of Kyzyl Asker (5,842m), reaching the upper northeast ridge. We were accompanied to base camp by fellow countryman Ivan Vallejo, the seventh man to climb all the 8,000ers without supplementary oxygen. We had first heard about this peak from Russian friends while descending Pik Pobeda, and after the 2013 ascent by Nico Favresse and party (AAJ 2014) we decided to pay it a visit.

Our trip started on July 31. We spent several days in Urumchi dealing with logistical problems relating to Chinese customs, finally leaving town on August 9. Three days by bus over very good roads brought us to a small Uygur house, where we were hosted for the night and supplied with motorbikes, camels, and donkeys to transport all our equipment to a base camp at 3,600m. We reached there on the 12th after five hours of easy trekking. Kyzyl Asker, which means red soldier, is a perfectly apt name, as it looks defiant, provocative, and wild at the head of a 10km glacier. We first spent a couple of days making a cache at ca 4,100m before establishing a tent below the wall at ca 4,550m. On the 18th we climbed the first pitches, but due to unstable weather were only able to fix 11 pitches over the next six days, hauling all our equipment to the high point. This section is on great rock, mainly in cracks but with some face climbing to connect crack systems.

Pitches nine and 10, both involving overhanging climbing with good pro, are the technical rock cruxes at 5.12a. On the 22nd we left the tent and moved up to Camp 1 in a portaledge on the wall. Over the next two days we climbed four more pitches to reach the base of the final corner system below the summit ridge.

Realizing that good weather doesn’t last long in this range, we decided to make a summit bid on August 28. We started from Camp 1 at 3 a.m. and reached the ridge at 11 p.m. We decided to treat this high point (ca 5,700m) as our "summit": A storm had already started, and snow conditions on the final ridge did not appear favorable. The last pitches had been amazing, though threatened by icefall—one of the team was knocked out during the ascent. It was here we found the ice/mixed cruxes, with good pro on the mixed, but also very poor quality ice.

We spent the next eight hours descending to Camp 1, and from there we continued to the glacier the same day, knowing that the weather would not improve, and that our "hiking permits" were just about to expire.

While we never experienced any horrible wind, the temperatures varied wildly, from scorching hot days on the lower wall to -30°C during our summit bid.

We named the route Sal con Cebolla (Salt with Onions) after our diet on the glacier: We ate mainly onions and noodles during the expedition because Chinese customs officials had confiscated all the food brought from Ecuador. The 1,100m route had difficulties of 5.12a C1 WI5+ M6+.