The story begins with an awkward mistake many years ago: In 1997 my friends and I climbed a beautiful 6,132m peak in the Rupal Valley, close to Nanga Parbat, and claimed the first ascent in the 1998 AAJ, calling it Laila Peak. In April 2009 an email from Roger D. Mellem revealed that he had climbed the same peak in 1974 with William Unsoeld and others (AAJ 1975, pages 213-15). He had known this since 1998, but waited more than a decade to tell us because he didn’t want to spoil our memory. What a nice gesture. We had been fooled into thinking it was a first ascent by naming confusion. We got the name Laila from the locals. However, Unsoeld and friends called the peak Toshain II. Manfred Sturm, who did the second ascent in 1975, referred simply to Toshain in AAJ 1976.

A fresh look at the old photos and maps made me eager to visit the area again. We set up a team and traveled to the Rupal Valley in June 2009. We camped on the right lateral moraine of the Toshain (Rupal) Glacier at the so-called Mazeno Base Camp meadow (4,000m). For acclimatization, we attempted the 5,971m peak opposite base camp. Messner and his brother Günther claimed the first ascent of that peak in 1970 from southeast. They called it Heran Peak, while Karl Herrligkoffer refers to Shaigri Peak (which is in fact the somewhat higher peak behind it). Locals call it Buldar Peak (Old Peak). Thomas Niederlein and I climbed the northwest ridge (PD) in three days. Since, to our knowledge, the peak was not virgin, we turned back where the northwest ridge meets the long, nearly horizontal summit ridge. But Robert Koschitzki followed our track the next day and continued to the mountain’s highest point.

Back in Germany, Himalayan chronicler Wolfgang Heichel told us that neither the Messner brothers nor Sumio Tanaka and his Japanese team, who did the north pillar in 1990, had reached our summit. Nor had Mark Twight, who climbed northeast ridge in 1988. All of these climbs ended at the 5,717m east summit, or Heran Peak, 1.8km away from the highest point. So it is very likely that Robert Koschitzki did the first ascent of the 5,971m peak on June 29, 2009. To unscramble the naming chaos, we suggest calling the higher summit Schlagintweit Peak after the famous German scientist Adolph Schlagintweit, who visited the Rupal Valley in 1856.

Koschitzki, Niederlein, and I, plus Annette Longo, Norbert Trommler, and Gernot Frank, ascended another peak by a straightforward route (PD-) on July 1. It is the highest point between Mazeno Pass and the so-called Toshain Pass. We measured an altitude of 5,730m by GPS and called it Mamu Choti.

Next we attempted the virgin 6,424m Toshain main peak in alpine style. It took us three days to find a route through the seracs of Toshain Glacier. From a camp at 5,700m, we headed toward the summit on July 7, and at 10 a.m. we reached the foresummit, 150m below the highest point. However, high avalanche danger prevented us from proceeding.

The next day Robert Koschitzki and I attempted the neighboring Peak 6324m, the second highest of the Toshain group. We climbed the north ridge to 6,100m, where Robert was caught in a slab avalanche. Fortunately I was able to belay him, but we decided to turn back. 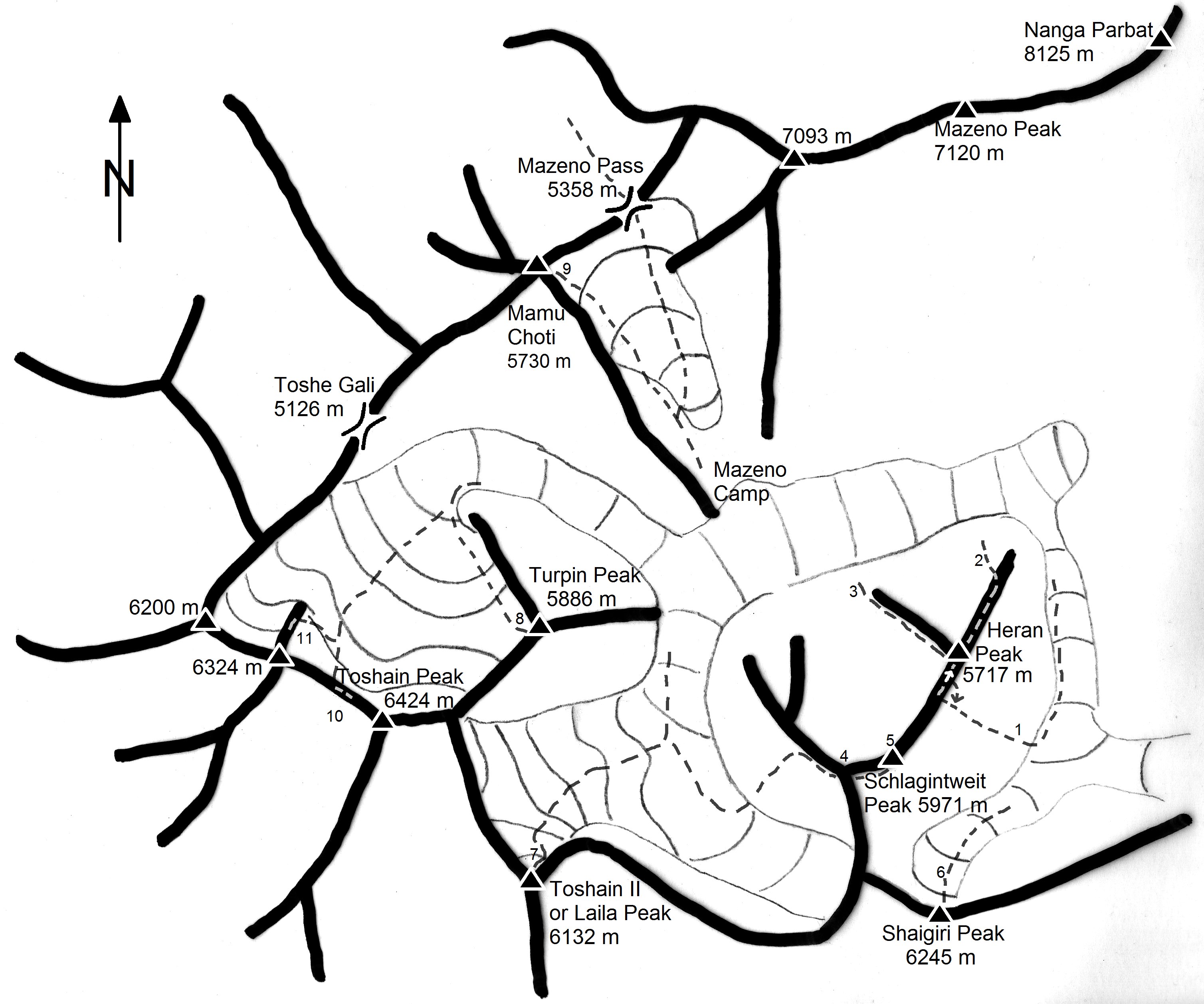