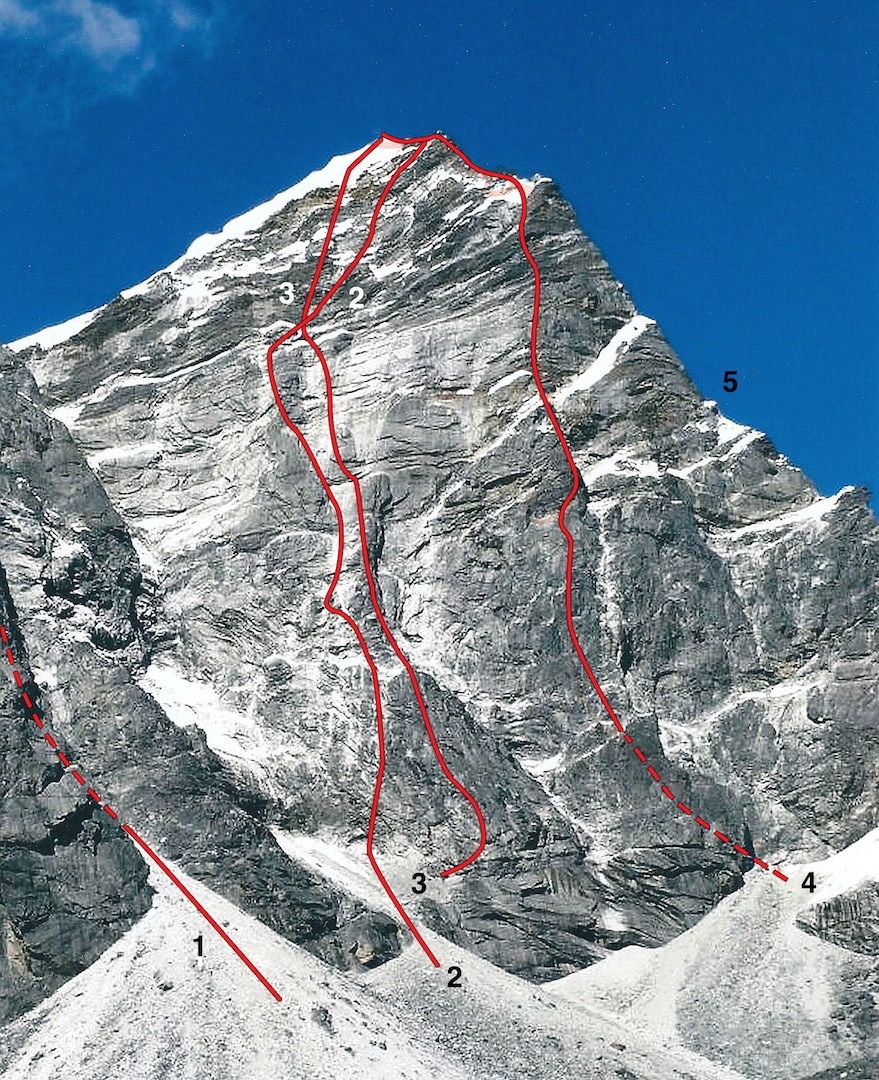 On April 27, Yuri Kilichenko, Makcym Perevalov, Petro Pobebeghnyi, and Yuri Vasenkov from Ukraine completed a new route on the ca 900m east face of Lobuche (Lobuje or Lubuje) East. Incorrectly marked as Abi on the official HMG-Finn map of the Khumbu, Lobuche East is considered one of the more difficult trekking peaks and relatively few climbers have reached the true summit.

A Japanese team likely made the first ascent of the 6,090m-peak, via the southeast ridge, in 1979. Over four days in late October 1984 Todd Bibler and Catherine Freer climbed the east ridge, which rises above the screes northwest of Lobuche village. They reported difficulties up to 5.8, though an American repeat in 1990 took five days and found difficulties of 5.9 and A1. The first ascent of the east face took place in spring 1986, when Henry Kendall and Jeff Lowe climbed a snow/ice couloir well left of the main rock wall. Alison Hargreaves and Mark Twight repeated this line a few days later. The East Face Couloir (TD, Scottish 5) exits onto the southeast ridge, and some subsequent ascensionists have found it can be very thin.

In September 1990 the Czech brothers Michal and Miroslav Coubal forced a route directly up the center of the steep, slabby rock wall of the face, creating Ave Maria (UIAA VIII-) in a five-day, alpine-style ascent. Two years later, in September 1992, and on their third attempt, Koreans Kim Jae-soo, Lee Sung-chun, and Park Young-sik started left of Ave Maria, slanted up to join it after a few pitches, then moved left, climbing 20–50m left of the Coubal route before crossing it again near the top. They completed their route over 15 days, using fixed rope. After climbing the first 13 difficult pitches (some sections overhanging) they were caught by bad weather but continued up the remaining six and a half pitches to the top of the face without incident.

The new Ukrainian route lies roughly midway between Ave Maria and the east ridge. The four men first climbed an ice couloir (up to 70°) behind a buttress separated from the face, then followed this with four 60m pitches up the steep lower rock wall. Difficulties here were A2/A3 and 6b, with around 40 percent of the climbing on aid. The angle now eased, and the team set up a bivouac (ca 5,570m) and the same day fixed their ropes up to the base of the second steep section. They spent two nights at the bivouac site to recover from the exertions of the first day. Up to this point they found traces of a previous attempt: three or four old bolts with carabiners on the lower wall, and slings, bolts, and carabiners at the first bivouac site. They estimated these to be around 10 years old.

The four Ukrainians climbed the second wall in four 60m pitches, up to 6b, before making a second bivouac at ca 5,950m, just below the east ridge. Here they were forced to break into their emergency provisions: a can of morale-boosting red caviar. Next day they finished up the top section of the east ridge (straightforward climbing over rock, ice, and snow), reaching the summit at 1:30 p.m. They descended the normal route (southeast ridge) in bad weather and reached the village of Lobuche the same day. About 40 percent of the route was climbed in rock shoes, the rest in more conventional boots. The rock was generally compact, but with many detached blocks, which the climbers had to negotiate carefully. They placed a few bolts at belays. They named the route Two Arrows Flight (Russian 6A), because, looking up at the two steep sections from below, they realized they would have to climb both in a direct line.