A lot of things had to come together to get Ryan Johnson, Gabe Hayden, and I all on the tarmac at the same time on a sunny autumn afternoon in Juneau. I had been in town for almost two weeks, testing my short-lived Coloradan patience for waiting out wet, drizzly weather, and was also rapidly running out of time. I had already postponed my trip twice due to having a regular, salary-earning lifestyle that’s not conducive to training or Alaskan climbing trips. Gabe and Ryan, Juneau locals, merely lined up a few days off work last-minute to take advantage of a rare forecast for September sunshine.

We were dropped off by helicopter at the base of the Mendenhall Towers on September 13, with two days of decent weather in the forecast. After a short reconnaissance, we set our sights on the unclimbed south face of West Mendenhall Tower, with its alluring, steep, steel-gray upper headwall. Setting up camp, we had the horrible realization that half of our food and all of our beer had been left in the car back at the airport. The emaciated Gabe and my gargantuan self worried about our slim rations; Ryan, with a hobbit-like physique, is uniquely prepared for situations such as these, so he was not overly concerned.

After a meager breakfast, we launched the next morning. The climbing began with two fun and engaging pitches of steep rock, highlighted by a 5.10 offwidth. We then followed an easier ramp for several hundred feet to the headwall. From the top of the ramp, we climbed five more steep, sustained, engaging pitches to the summit ridge, with difficulties up to 5.11c. The climbing was generally on clean splitter cracks with great friction. Another easy pitch along the mossy summit ridge led us to a short walk to the summit. Far below we could trace the contours of the Mendenhall Glacier all the way to Juneau, almost spotting the airport where our car was parked with its load of food and beer; beyond, the channels of the inside passage and mountainous islands stretched across the horizon. An uneventful rappel back down our line got us to our tent just before sunset.

Our original plan had been to climb for two days and then walk out. However, the forecast took a turn for the worst the next day, so we hiked out a day early, on September 15. This hike is a chore in good conditions. This year, an unusually hot and sunny summer had shredded the glacier; it was almost to the point of being impassable. After about 11 hours of pushing hard, we made it back to the trailhead. Three hours later the rain began to fall. We dubbed our route Balancing Act (1,400’, 5.11c) due to the logistics and sacrifices we dealt with in order to climb together. 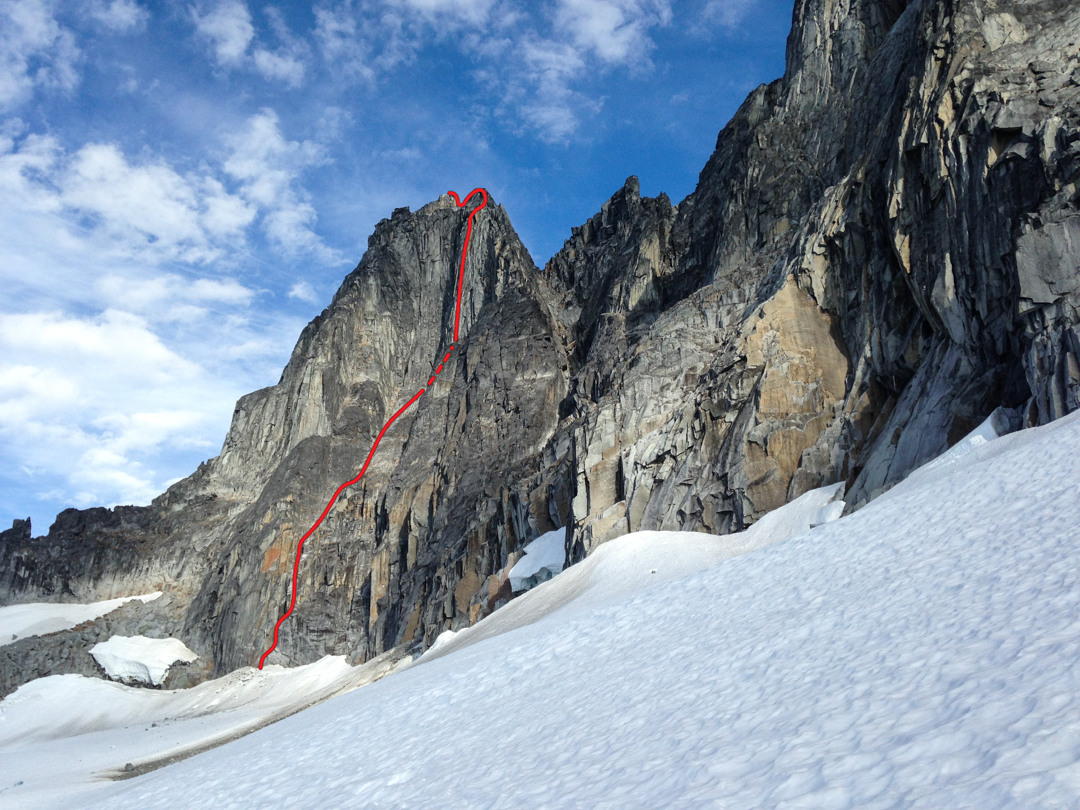