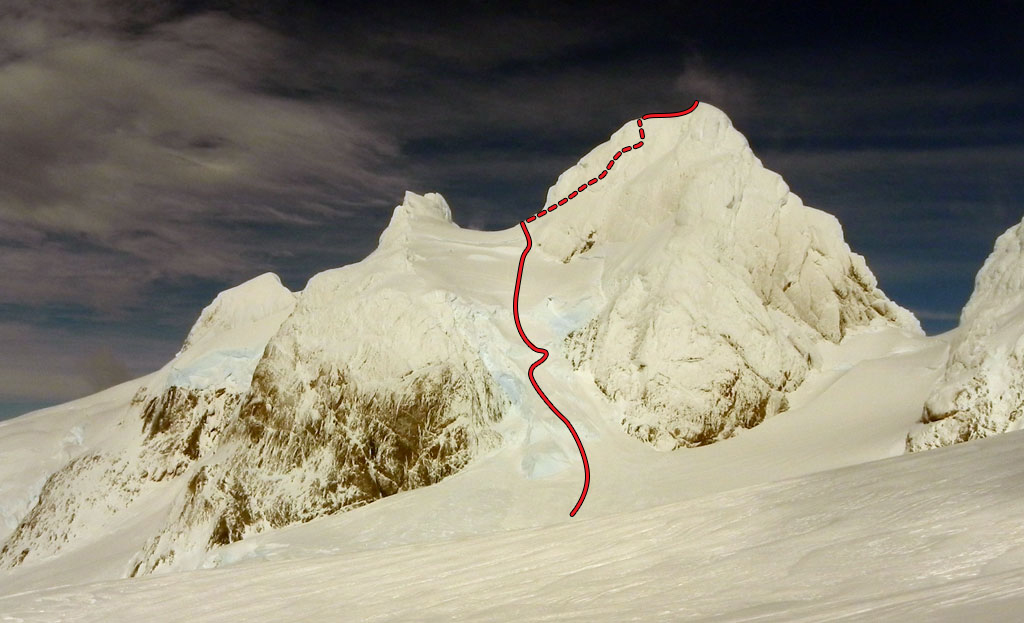 The Cordillera de Sarmiento is the southernmost range of the Andes before they sink under the Magellan Strait. Although these peaks are all under 2,000m, the ragged ridges, sharp needles, and steep faces offer great mountaineering challenges, with the worst of the infamous Patagonian weather. After a rush of exploration and attempts through the 1990s, the range had not seen climbers in 12 years before Natalia Martinez (Argentina) and I visited in August 2012. [See Recon: Cordillera de Sarmiento earlier in this edition for the full history of these spectacular mountains.] On August 17 we set base camp near the toe of Glaciar Bernal on the west bank of the Fiordo de las Montañas, after a four-hour Zodiac ride from Puerto Natales. Following a week of load carrying in whiteouts and a couple of stormbound days in an igloo, we set high camp at 1,200m on a plateau near the headwalls of Cerro Alas de Ángel and Cerro Trono, the third- and second-highest summits of the range, respectively. [These peaks were named Angel Wings and the Throne by the 1992 expedition led by American Jack Miller, but the consensus now is that Spanish names should be used.]

The clouds broke for the first time on August 25, giving us the opportunity to quickly plan a route up Alas de Ángel (1,767m). Following our plan to chase every single climbing opportunity, we launched an attempt amid constant wind and snow flurries, following the middle line of the steep glacier pouring down the northeast face. This involved a few short vertical steps on good ice. From the col between the north and south summits, we followed the southwest face up the northern peak, still in whiteout conditions. The crux came near the top with a steep pitch up a rime-covered wall. We reached the summit after six hours (550m, D+).

On the 27th we could see Cerro Trono (1,879m) for the first time, and we planned a route up its broad and rime-covered west face, which we attempted the next day in whiteout conditions. After linking a series of terraces with four pitches on rime and hard ice, we failed to penetrate the band of overhanging rime cauliflowers guarding the summit ridge.

We made a second attempt on September 2, the only day that we enjoyed a few hours of clear skies. We followed a similar route, but aimed first to reach the easier northern summit, which proved to be lower than expected. After returning to the col, we regained our earlier highpoint and continued to excavate rime and loose ice until we were able to climb five meters of overhanging ice, with several steps of aid, to gain the summit ridge. Easy terrain led to the summit, which we reached under heavy winds and whiteout conditions (500m, MD).