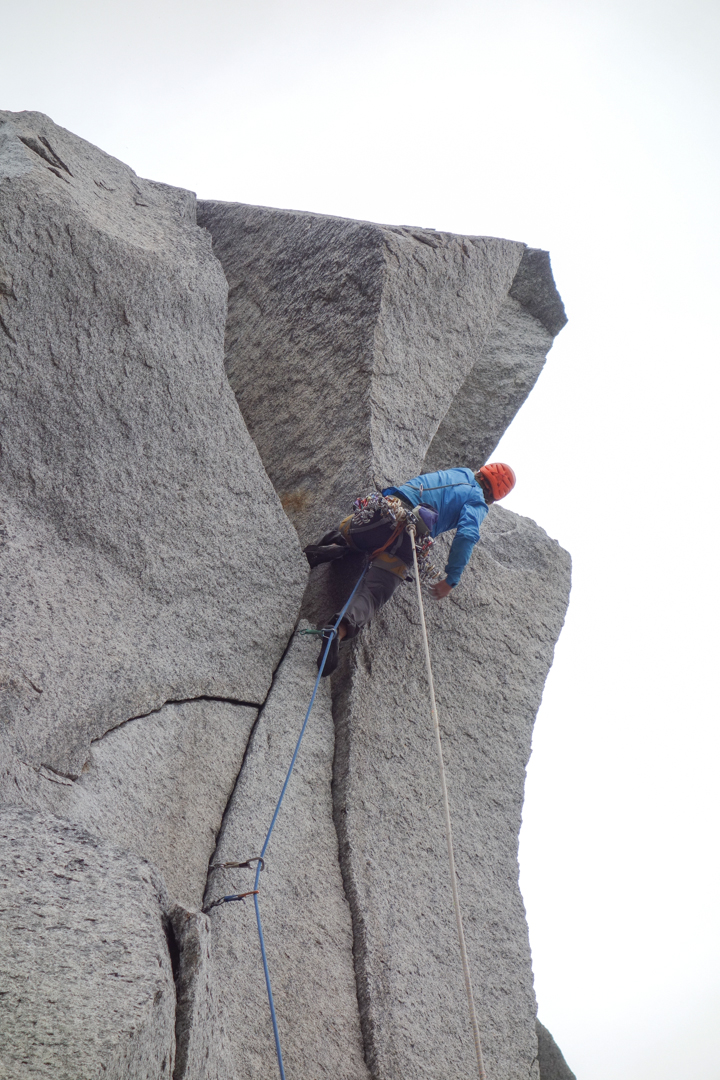 After opening El Filo la Aleta de Tiburon (see previous report), I was set on finding a cleaner and harder route, full of splitter cracks. Near the back of El Anfiteatro, up a gully, was an amazing-looking buttress, still untouched. I was in need of a partner. Luckily, my girlfriend Megan Kelly and our new friend Dustin-Marco Hardgrove showed interest just in time.

A few access pitches led us to an amazing series of splitter cracks that form the bulk of the line, which is capped by a lightning-bolt-shaped squeeze chimney. On day two, Marco sat out and Zdzislaw “Tom” Lepert jumped in; however, we were only able to push the route one pitch higher, and with bad weather coming, as well as the end of Megan’s trip, we had to put the effort on hold. After Megan returned to the U.S., Marco and I teamed up with Miranda Oakley to finish the line. That day we attempted to free the lower pitches, while carrying drilling and cleaning gear. I was able to free the first pitch “Index 5.11c” (which is maybe more like 5.12a); Marco led a 5.11/5.12 splitter on pitch three; and I came heartbreakingly close on the fourth pitch tips crack, which features two roofs, an offwidth-squeeze finish, and a deadpoint to a granite spike (proposed 5.12).

Above the crux we continued upward, free-climbing wet, vertical cracks (5.11) and mungy offwidths (5.9). Marco led the final pitch in the dark: a full 70m epic to the summit.We topped out around midnight, then made our way down the route, bolting as much of a rappel line as we could with our remaining battery. Unfortunately, we had to leave a few empty holes, as we ran out of bolts. A few rap anchors are comprised of wedged knots. We plan to return and establish a safe bolted rappel line for future climbers.We named the route Siete Venas (10 pitches, 5.12a C1) in honor of the seven distinct pitches of clean cracks on the route. The wall, which was previously unclimbed, we called Pared el Fin de Tiempo (“The End of Time Wall”). The route can be rappelled with a single 70m rope, but bring extra nuts to back things up.