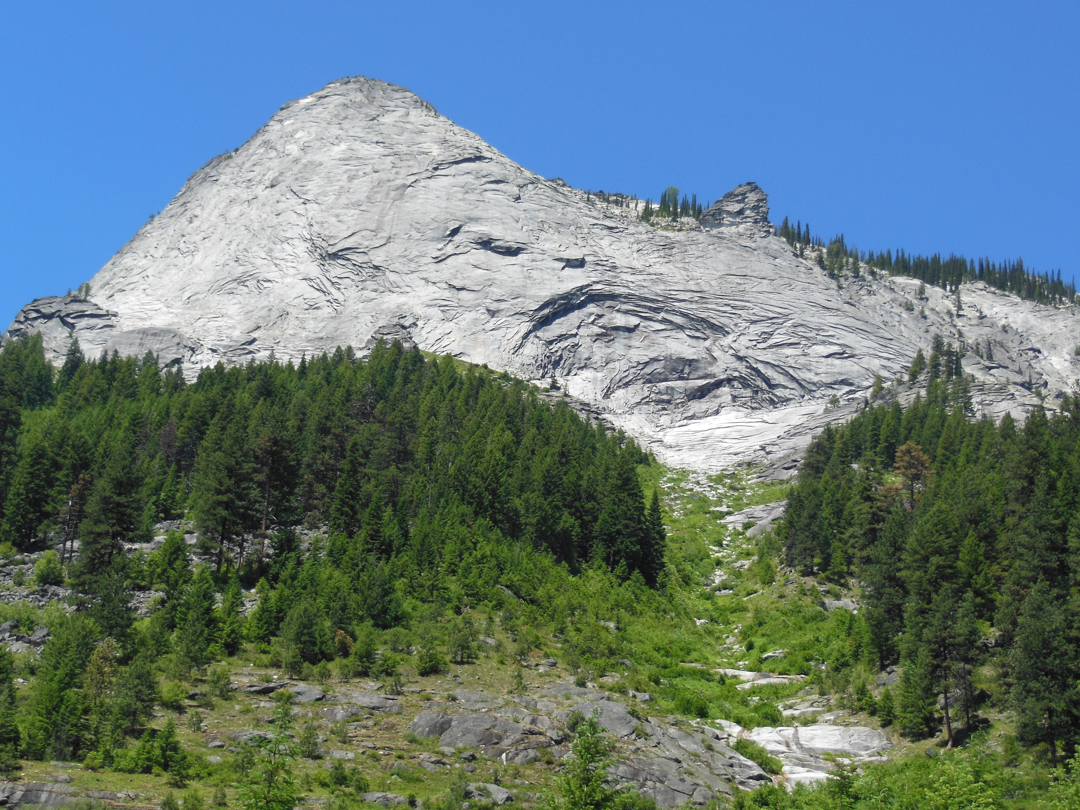 I HAD BEEN searching for this rock for roughly 20 years, having first heard of it from a wilderness outfitter, who said it was somewhere in the southern Bitterroot Wilderness and was one of the biggest walls in the range. My searching brought about many other great ascents in this remote area (AAJ 1993, 1994, 2001, and 2003). Over time, after many wild goose chases, I began referring to the unknown rock as Mystery Dome.

In 2010, I gazed at a telephoto image taken from the Bitterroots’ El Capitan: 15 to 20 miles west I noticed a big dome. Paul Weese helped me match the photo to what I saw on a satellite map. The dome’s southwest aspect appeared bigger than Fairview Dome in Tuolumne, suggesting a worthy prize. It appeared to be near or part of Cuneo Point (8,285’), a massive mountain. But research suggested Mystery Dome was unnoticed, unnamed, and unclimbed.

In early June 2012, on a recon trip, I departed from Paradise, Idaho, which lies at the end of the Magruder Corridor Road. I failed to get more than 10 miles up White Cap Creek Trail due to rain and mud. Three weeks later, with drier trails, Devin Bartle, Paul Madeen, Craig Weese, Paul Weese, and I made it 14 miles up the trail in one day. Hiking four more miles the next day, I finally glimpsed the formation, and at the 20-mile mark we found a great base camp area below it in a grassy meadow. From the meadow, a 1,500’ vertical approach brought us to the base. I took many photos to study later. Our friend Chinook Swindle volunteered to help haul in the heavy climbing gear with his horse and two mules.

On July 3, Jimmy Pinjuv, Phil Wesseler, and I, along with Chinook and his stock, gathered at Paradise to stage our climb. By July 6 all of our gear was at the meadow. Chinook would meet us again on July 9 to help us out. We carried 80-pound packs to the base up the steep, bush-choked gully. A spring below the wall was dry, but we found water in a gully to the east. We dug a bivy site and were quickly overwhelmed by clouds of mosquitos.

At 5 a.m. on July 7, the three of us began climbing up the southwest arête of the formation. The opening pitches were all 60m on good granite, consisting of friction climbing up to 5.9+, often run-out, with seams for tied-off pitons or micro-cams. We found decent belays. Moderate terrain continued until pitch six, where the rock became suddenly blank. We found a way up a shallow corner and thin seam; up higher, a roof led to a corner with a good crack in the back (A3). This tough pitch consumed two hours. The seventh pitch offered more of the same: seams in leaning corners, bolt and pecker required. At 9:45 p.m. we reached the start of pitch eight, which looked blank for at least 70’ with a roof above. We were down to one quart of water between us and knew it would be a scorcher the next day. We had only our clothing for bivy gear.

I have done many cruxy night leads over my 40-year climbing career, and I don’t starve for those sections like I used to. I suggested Phil take the lead while I coached him on how to rivet. The tap, tap, tap of the hammer was endless and rhythmic. Occasionally he would hit a discontinuous seam and give the hammer a rest. Higher up he was forced to place a couple of quarter-inch bolts, which allowed him to nap in his aiders. By 3 a.m., Jimmy and I had begun shivering. I used the movement of the constellations to track time and progress. Gradually, a faint hint of light appeared on the horizon. By the end, Phil had placed eight rivets and two quarter-inch bolts on his unrelenting, all-night lead (A3).

The climbing on the next pitch was easier (5.8). Then a falling block on pitch 10 core-shot our lead rope. We tied a knot and continued. Pitch 11 offered more thin seams and a traverse leading to an alcove with no apparent way out. A marginal belay off half-driven pins and a quarter-inch bolt, along with incoming lightning, caused me to dub it the “Alcove of Despair.” Above the alcove, another hard lead up a seam gained a ledge with another marginal two-pin anchor. The rock above relented, and the summit seemed close. Free-climbable terrain (5.10) through shallow corners, with the best cracks that we had seen on route, led us to a notch on the skyline. There was no sign of prior ascent, and we left a register in a water bottle. We descended an alder-choked gully that felt like a highway to us, and after 2,000’ reached our bivy and some water. Totally dehydrated, with full-body cramps, we continued down to the White Cap Creek Trail and passed out. At 6 a.m. the following morning we grabbed our 80-pound packs and met Chinook farther down trail, finishing the hike out the following day.

Our ascent of the Mystery Dome via the southwest arête (13 pitches, V 5.10 A3) required 34 hours of continuous climbing and is one of the finest first ascents I have done. Only two pitches were shorter than 180’. We placed a total of eight rivets and four quarter-inch bolts. I won’t lie—it was a suffer-fest.

The steep west face and unclimbed terrain on the south face of Mystery Dome await hardy, adventurous souls looking for a big wall in a truly remote, challenging wilderness. In honor of Chinook, we named a small, black satellite spire on the southeast shoulder Chinook Spire. I still wonder if this was the rock the outfitter told me about 20 years ago. I think it healthy to suggest not, and continue to wonder:What if?