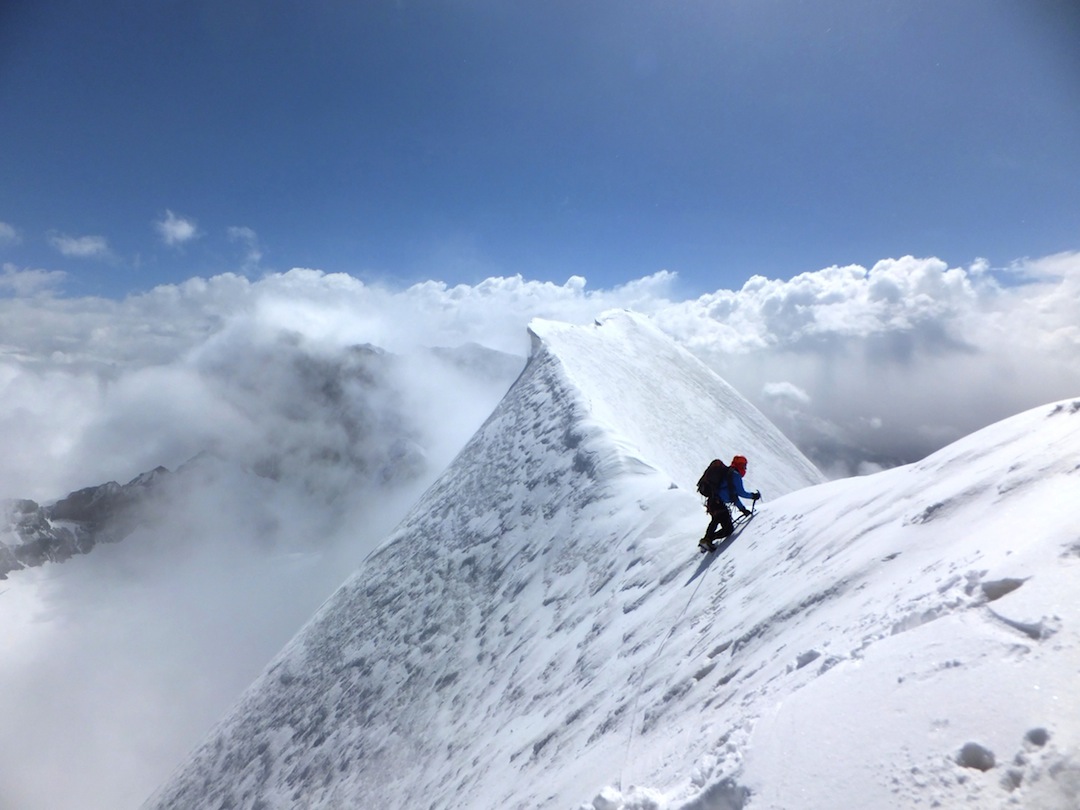 In August, Harry Bloxham, Clay Conlon, Al Docherty, Harry Kingston, Ross Davidson, and I (all from the U.K.) spent three weeks in the Djangart Valley. We had planned to attempt three 5,000m-plus unclimbed summits. Just before traveling, however, we learned that our primary objective, Peak 5,318m, now known as Peak After You, had been climbed a few weeks earlier by a team of Americans. Furthermore, the helicopter from Maida-Adyr airbase dropped us 10km from our preferred base camp.

Despite these setbacks, an initial exploratory trip onto the Kichik Sauktor Glacier turned into the successful ascents of two unclimbed peaks on the Chinese border. Following a tiring 12-hour approach from base camp, Ross, Clay, Harry Kingston, and I established advanced base camp at 4,300m. The following morning we left the camp at 3 a.m. and climbed to a col at 4,800m. Exhausted and with potential bad weather approaching, Harry and I chose to abandon the main target and instead summited a nearby unclimbed peak (Peak Little, ca 4,850m, AD-). Ross and Clay continued to the southeast and then east, finding difficult conditions that required them to pitch much of the corniced summit ridge. They summited Peak Currahee (5,025m GPS, D- III) at around 11 a.m., and returned to the col after 16 hours of climbing. Finding snow conditions too poor to continue the descent, they opted to bivy at the col and descend early the next day.

Harry Bloxham and Al were next to summit, climbing a cracking new line up west-facing snow slopes on previously unclimbed Peak Betelgeuse (ca 5,100m, AD-) in the N1 valley.

After a short period of bad weather, the team walked one day up the Akunguz Glacier (a.k.a. Akoguz Glacier). Harry Kingston, Ross, Clay, and I climbed Peak Kasparov (4,822m, AD), following snow up the north side to the rocky west ridge. The following day Ross and Harry K. summited Peak Ozon (4,971m, AD), climbing snow and ice to the east ridge. Meanwhile, Harry B. and Al had walked west the length of the Djangart Valley to set up an advance camp on the Djangartynbashi Glacier. Here, they climbed two great new routes: the north face of Peak Feto (4,831m, AD+) and the west face of Peak Topor (ca 4,970m, D-), both previously unclimbed summits with some of the best alpine ice the team had ever encountered. The expedition gratefully acknowledges support from the Alpine Club, BMC, and Mount Everest Foundation.

A complete expedition report (10 MB PDF) can be downloaded here.