I first explored a route on Nevado Salcantay (6,279m GPS, also spelled Salkantay) in May and June 2011. In May I traveled to the west side with a friend, Josee Galipeau, looking for a good route to climb and also exploring an alternative trekking route to Machu Picchu. A month later Marius Rouleau agreed to go with me to the east side of Salcantay to explore the Ahobamba Valley. We went without horse support and hiked for 22km over two passes: Incachillaska (5,100m) and Abra Palqay (4,700m). We established base camp below the peak and the next day climbed to ca 5,500m, establishing a high camp. We then went down after realizing that the summit was still very far away.

Later that same month, on June 26, I left Mollepata with my friend Edwin Espinoza. We climbed up to about ca 5,225 on the northeast ridge, starting around 2 a.m. However, by 9 a.m. we had only reached ca 5,900m, and we turned around with a storm approaching from the Amazon. We spent the next two days retreating from the mountain in waist-deep snow. With no visibility, our only option was to go north down the Ahobamba Valley and come out at Machu Picchu, which took an additional two days. However, we had glimpsed the summit from our highpoint—it was not out of reach.

In June of 2012 I tried Salcantay again with two friends. This time the weather was perfect, but they both got altitude sickness at our high camp.

In June 2013 I set out with the team of Edwin Espinoza, Luis Crispin, and Thomas Ryan for another attempt. On June 13 we climbed Cerro Soray (5,446m) to acclimatize. On June 15 we went from Soray Pampa to a base camp at Palqay Pass (ca 4,700m) with horse support. While checking equipment, Edwin noticed a boot malfunction and was forced to stay behind. On June 16 we reached high camp at ca 5,500m. We left the tent at 1 a.m. and followed the same route I had tried earlier on the northeast face. After nine hours of climbing we finally stood on the east summit of Salcantay, and were soon covered by clouds. We took an elevation reading of 6,279m with our GPS. It took another five hours to get back down to the high camp, downclimbing the entire way. The next day we finished the descent to base camp. I climbed the route again in late July with James Lissy and Edwin Espinoza.

Nevado Salcantay is a very difficult mountain to climb for many reasons. The approach requires a 22km hike over two passes (5,100m and 4,700m). The climb up to high camp is difficult and relatively technical while carrying a large pack. There are places where the avalanche danger is significant. Also, since the mountain is above the cloud forests of Machu Picchu and the Amazon, clouds often reduce visibility to a minimum, and it is very difficult to continue if you do not know the route well. [The last reported ascent of Salcantay was in 1995.]

Thanks to two years of experience and attempts, we were able to summit this mountain after many years of being unconquered. The unclimbed west face will occupy us in the coming years.

[Editor’s note: Salcantay has two summits, west and east, separated by about 1km. When the mountain was first climbed, by an American-French team in 1952, the western summit was about 30m higher. But a portion of the peak collapsed in the 1970s, leaving the two summits roughly equal in height. In early season, Nathan Heald reports, the east summit is the highest because of accumulated snow, but by July and August the western top is higher.] 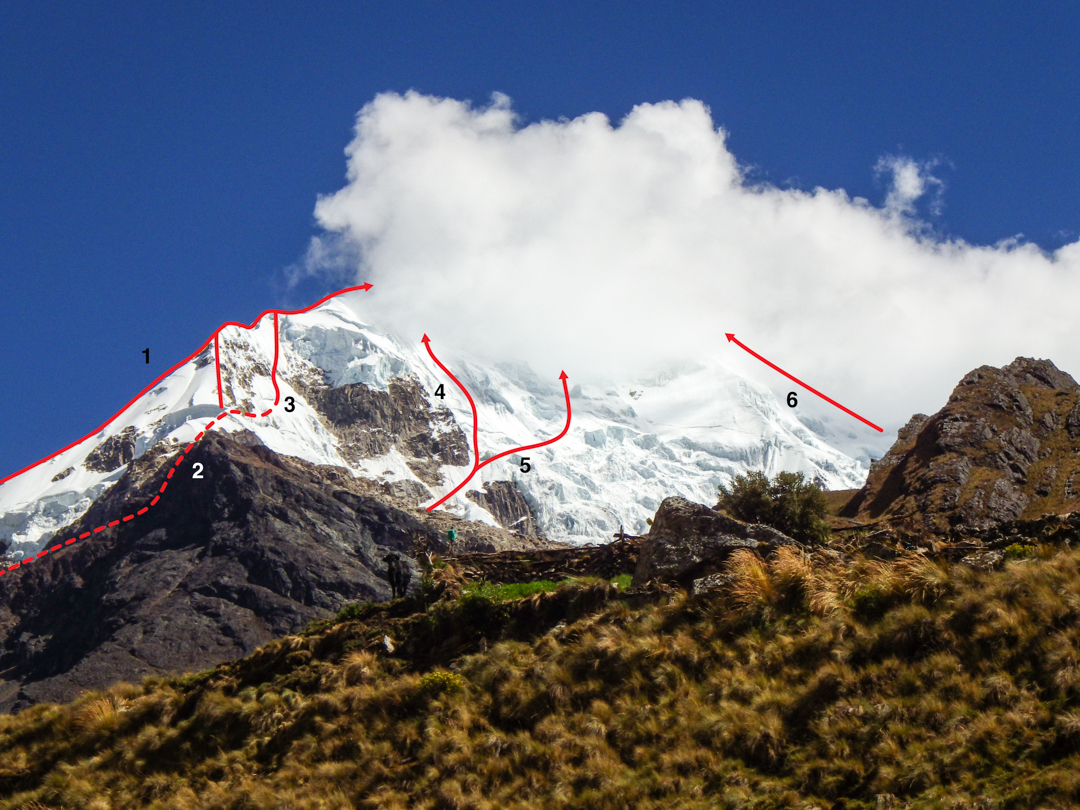 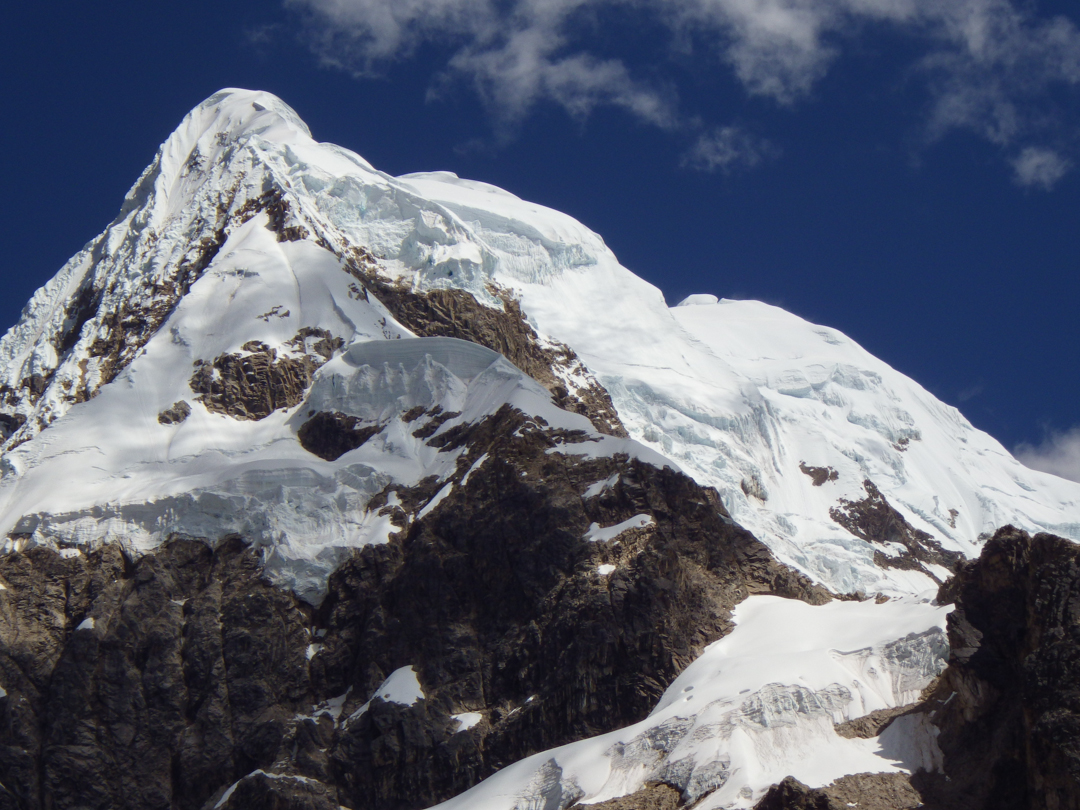 The northeast aspect of Salcantay. 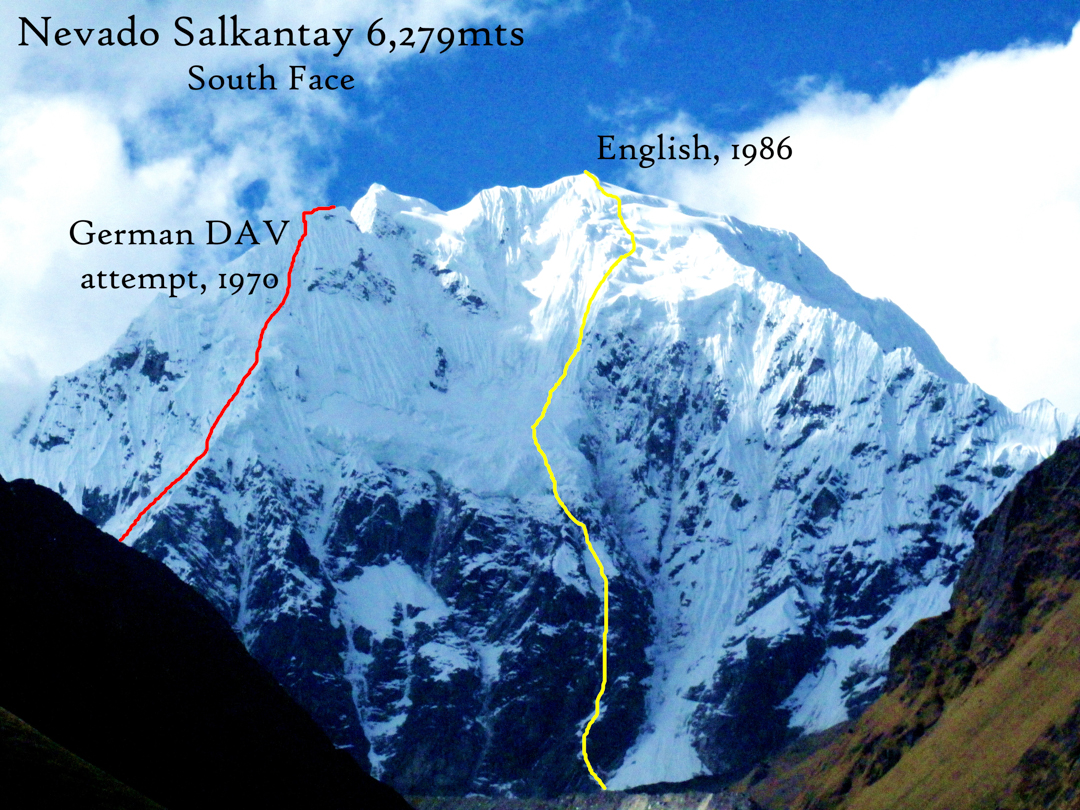 The south face of Salcantay, showing the successful English route and the attempted German route. 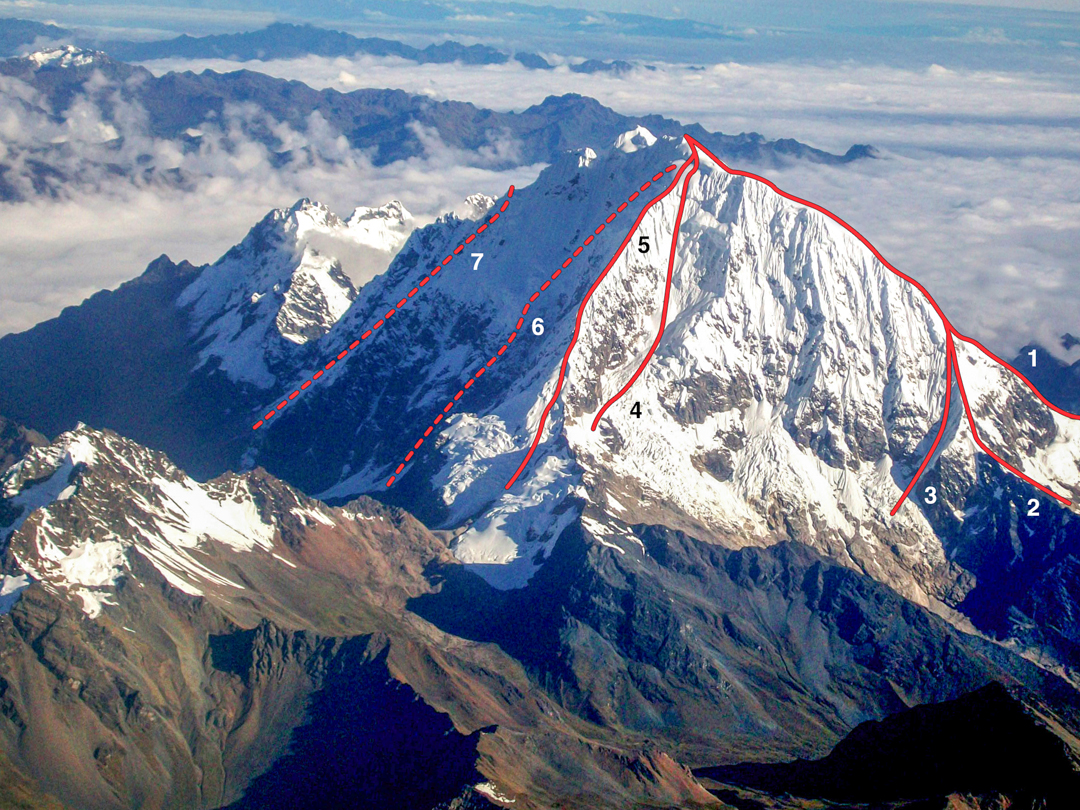 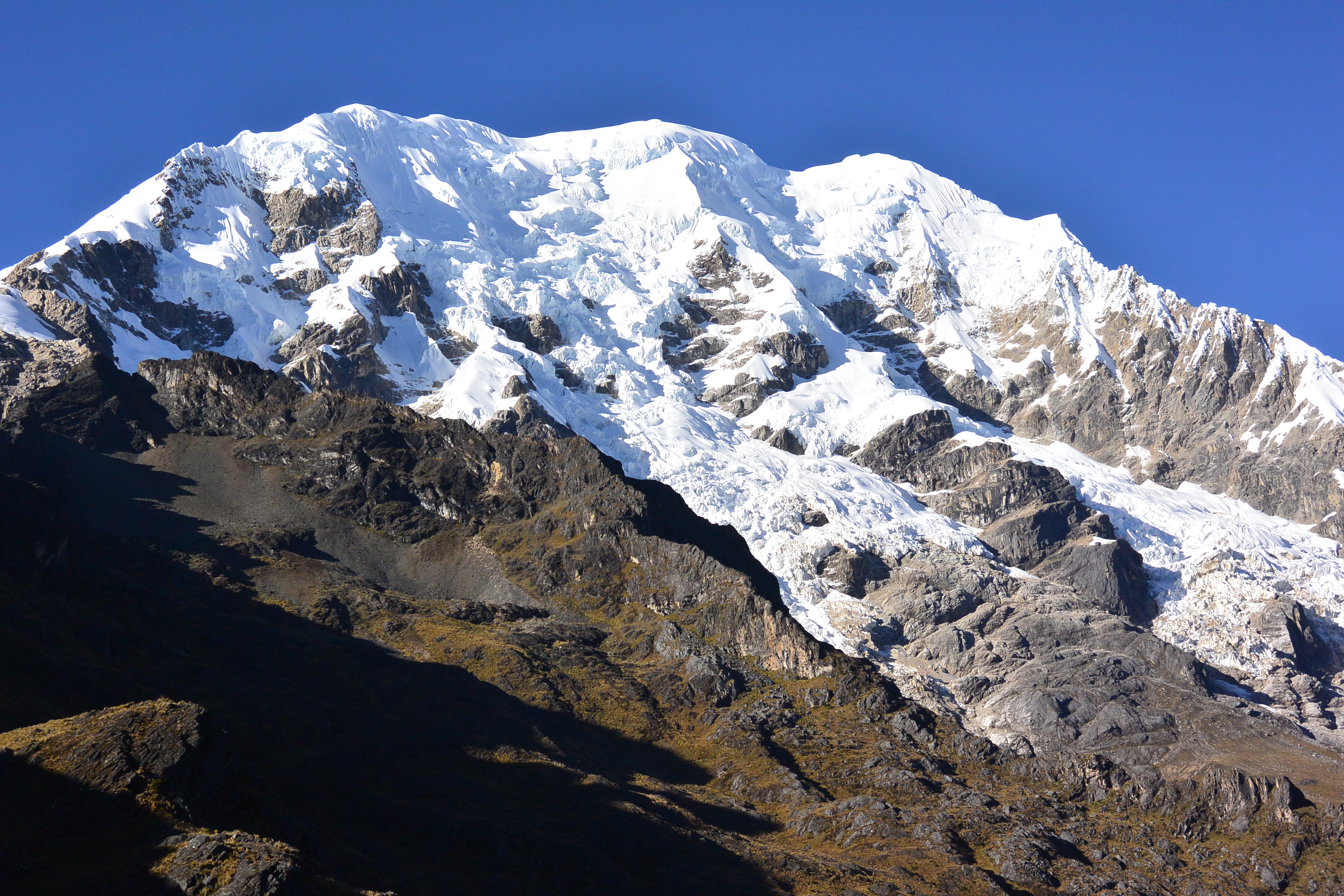 A rare, cloudless shot of Salcantay's north side. The northeast ridge comprises the left skyline. Also pictured: the east (left) and west (right) summits.
Previous Next

The northeast aspect of Salcantay.

The south face of Salcantay, showing the successful English route and the attempted German route.

A rare, cloudless shot of Salcantay's north side. The northeast ridge comprises the left skyline. Also pictured: the east (left) and west (right) summits.
Previous Next