Where & Why Accidents Happen

The majestic, 14,410-foot volcano of Mt. Rainier, just 55 miles from Seattle, is one of the most popular mountaineering destinations in North America. Lined by massive glaciers on all sides, the mountain is attempted by about 10,000 people a year. It’s also the site of numerous accidents and close calls. More than 95 mountaineers have died on Rainier’s slopes, including the tragic loss of six climbers in late May 2014 after an avalanche high on Liberty Ridge.

This article aims to prevent future tragedies by analyzing the accident history of popular routes. We reviewed more than 110 reports from Mt. Rainier in Accidents in North American Mountaineering over the past 20 years. In addition, we examined the causes of climbing fatalities from 1984 through 2013, as tracked by Mountrainierclimbing.us. The data reveal accident trends on specific routes, suggesting how climbers might best prepare to avoid future incidents.

Geologically, Mt. Rainier sits on the Ring of Fire around the Pacific Ocean basin. Geologists consider Mt. Rainier to be an active, potentially dangerous volcano. More immediately, heavy snowfall and highly active glaciers shape the challenging terrain of the mountain.

Although there are more than 40 routes and variations up Mt. Rainier, the vast majority of climbers follow two lines: 1) up the Muir Snowfield to Camp Muir, followed by a summit attempt via the Ingraham Glacier or Disappointment Cleaver, or 2) the Emmons/Winthrop Glaciers route above Camp Schurman. With one prominent exception—Liberty Ridge—most accidents occur along these routes. As former climbing ranger Mike Gauthier notes in Mt. Rainier: A Climbing Guide, climbers tend to underestimate the difficulty of moderate routes.

As on any climb, hazards on Rainier fall into two categories: objective and subjective. Subjective hazards include errors on the climber’s part, such as inadequate experience, lack of fitness, and poor technique. Objective hazards include rockfall, icefall, storms, and avalanches. Although climbers can minimize subjective hazards through training and practice, many accidents result from a combination of factors. For example, an unfit climber may not be able to make it up and down the mountain before a warm afternoon increases the risk of rockfall or icefall. Accidents often have multiple layers of causes: The failure to keep snow from balling up on crampons causes a slip, which ends in a crevasse fall, which leads to injury or hypothermia.

Although storms and poor visibility are not often the immediate cause of an injury or fatality on Rainier, climbers should be aware that unexpected bad weather may occur anywhere on the mountain. Clouds, fog, and snow frequently contribute to the gravity of accidents and delay search and rescue efforts. July and August often bring stable weather, and these months see the most summit success. However, rain can fall high on the mountain in summer, causing treacherous footing when the freezing level drops.

Falls on snow and ice cause the most accidents on Rainier, especially on the Emmons/Winthrop Glaciers, Liberty Ridge, Ingraham Glacier, Disappointment Cleaver, and Kautz Glacier routes, and on Muir Snowfield. Climbers can avoid falling by learning the proper techniques for roped glacier travel, self-arrest, and climbing in crampons, trying more modest glacial routes to gain experience, and choosing appropriate partners. (See “Know the Ropes” in this edition.) Crevasse falls are most common on the Ingraham Glacier, Emmons Glacier, and near Camp Muir. Glissading accidents occur most often on Emmons Glacier, near Camp Muir, on the Muir Snowfield, and on the Inter Glacier.

Over the past 20 years of Accidents, Liberty Ridge, Ingraham Glacier, Disappointment Cleaver, and the Kautz Glacier have shown the greatest risk of avalanche, rockfall, and icefall. Mountaineers should attempt to climb these routes on colder days to decrease the risk of falling rocks and ice. Moving quickly and efficiently decreases exposure and risk of getting stuck.

Finally, climbers can decrease the risk of altitude illnesses and hypothermia by training appropriately, starting the climb healthy and hydrated, and properly acclimatizing.

Though it is not as steep as the upper mountain, the Muir Snowfield is the scene of many accidents, often involving climbers, hikers, or skiers unprepared for the conditions they’ll encounter, including icy snow and whiteouts. It’s not uncommon for people to wander to one side of the normal route and get into trouble. Crevasse falls occur, especially to the side of the main route and near Camp Muir (10,080’). Despite the relatively low elevation in this area, altitude sickness, hypothermia, and frostbite affect a number of climbers. Bottom line: Even the seemingly casual approach to Camp Muir must be viewed as a true mountaineering challenge, requiring appropriate preparation and equipment, including the ability to navigate in very limited visibility.

Two-thirds of aspiring Rainier climbers attempt the Disappointment Cleaver or neighboring Ingraham Glacier Direct route. Many accidents and illnesses occur here, including falls on snow or ice, crevasse falls, and avalanches. The deadliest accident in Rainier’s history occurred just below Disappointment Cleaver in 1981, when an avalanche, likely caused by serac fall, wiped out 11 climbers. Falling ice on the Ingraham Glacier has been the cause of several other incidents. On or below Disappointment Cleaver, rockfall has caused several accidents. There is also a disproportionately high incidence of altitude illnesses. 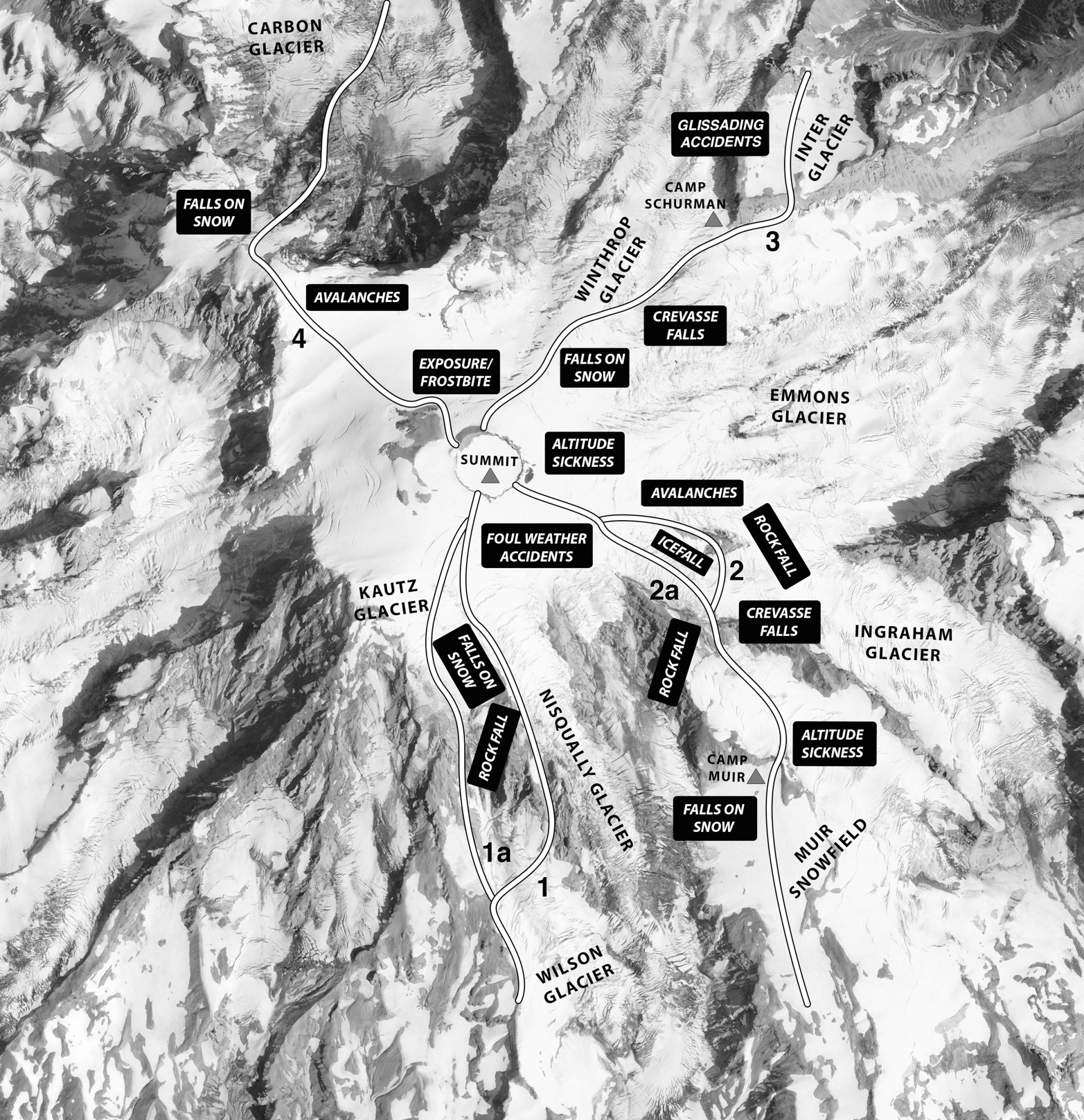 This route, the second most popular on Rainier, is attempted only a quarter as often as Disappointment Cleaver. Yet it has seen about the same number of accidents and fatalities in the past 30 years. Although it is the least technical route up Rainier, the Emmons/Winthrop climbs 10,000 feet and is physically arduous. Climbers must arrive with adequate fitness and stay hydrated in order to avoid sickness and exhaustion. More than one-third of the falls reported on Rainier in the past two decades have occurred here, especially as tired climbers descend from the upper mountain. Since the route travels across glaciers with enormous crevasses, falling climbers frequently fall into slots. The Emmons/Winthrop has been relatively free of avalanche or falling ice, suggesting that if climbers can stay on their feet they will likely have a successful climb.

This remote and difficult route is statistically the most dangerous on Rainier. Falls on snow or ice and avalanches have caused the most accidents. In addition, many accidents reported near the summit (Liberty Cap) or on the Emmons Glacier are actually the result of Liberty Ridge climbers becoming exhausted, hypothermic, or stranded by severe weather. (Most climbers traverse over 14,112-foot Liberty Cap and descend the Emmons/Winthrop Glaciers route.) This route’s commitment level requires an excellent forecast and low avalanche hazard, the ability to climb moderately steep ice with heavy loads, having the right navigational tools and skills, and carrying the equipment and food/fuel reserves necessary to sit out a storm near the top.

Whichever route climbers attempt, the crater rim and the slopes below are statistically dangerous. Severe weather and poor visibility strand climbers, leading to hypothermia, frostbite, and other injuries. There have been several instances of mountaineers mistakenly believing they could find warm shelter in the steam vents near the crater. It’s crucial to carry adequate bivouac gear and food to the top—don’t be tempted to leave your survival gear at high camp. Unsurprisingly, altitude-related illness is fairly common near the summit. Falls also are not uncommon on the relatively low-angle ground around the crater rim. Exhaustion, severe weather, or lack of visibility each present sufficient reason to turn back before getting into trouble near the summit.

The relatively isolated routes on the south side, above the Wilson and Nisqually glaciers, attract about 5 percent of Rainier climbers, looking for moderately difficult and less crowded alternatives to the most popular climbs. In addition to the usual hazards—falls, crevasses, avalanche—icefall and rockfall are notable in the accident record, particularly on the Kautz Glacier. A helmet is mandatory, even low on the route, and choosing a protected bivouac site mid-route is paramount.


There is no substitute for training and real-world practice before attempting big, glaciated mountains. Nonetheless, excellent information can be found in the books Climbing Mt. Rainier, by Fred Beckey and Alex Van Steen; Mount Rainier: A Climbing Guide, by Mike Gauthier; and The Challenge of Rainier, by Dee Molenaar.