In 2010, after a ski ascent and descent from Mt. Ararat, my friend Konstantin Babkin proposed that we look for virgin peaks for climbs and possible descents on skis, and in June of that year, along with Aleksey Bukinich, we departed for the eastern Zaalaisky Range (also spelled Zaalayskiy). The highest point of this region is the Kurumdy massif (6,613m), with the peaks of the Nura valley to the east and Kichkesu to the west.

We first headed for Nura, southeast of Osh, and investigated the peaks of the Kurum-Tor-Tag at the head of the Nura gorge—they didn’t present any especial technical difficulty, but appeared rich in avalanche danger. We did an ascent on the side of the gorge, but poor weather prevented us from taking good photos. One new route was climbed in the Kurum-Tor-Tag massif in 2013: A group of tourists from Moscow, led by A. Lebedev, climbed Peak 5,985m, which in fact turned out to be a 6,000er (6,022m GPS). Judging from their account, this is the westernmost summit of the massif.

After 10 days in Nura we called a car from Osh and moved to the Kichkesu region. The car was unable to force a crossing of the Kichkesu River, so we had to carry loads to our base camp at the mouth of the Right Kichkesu Glacier (Pravii Kichkesu). The most outstanding peaks of this region are Mt. Chorku (6,283m), Mt. Turkvo (6,243m), and Mt. Pogranichnikov (Peak of the Frontier Guards, 5,434m), all of which were climbed during the time of the USSR.

It was drier in this area, and we succeeded in doing two first ascents. The first, relatively easy climb was above the middle arm of the Right Kichkesu Glacier, reaching a summit of 4,935m, which we called Ing Yan (Yin and Yang) because its southern slope presents a stone slab while the northern slope was snowy and icy. Our second climb, of medium difficulty, ascended a 4,800m peak at the mouth of the Left Kichkesu Glacier (Levii Kichkesu), which we called Mt. Meretskogo (Mt. M), because from the valley the mountain looks like the letter M and because L. Meretskii was one of the heroes of alpinism in my hometown of Rostov-on-Don. 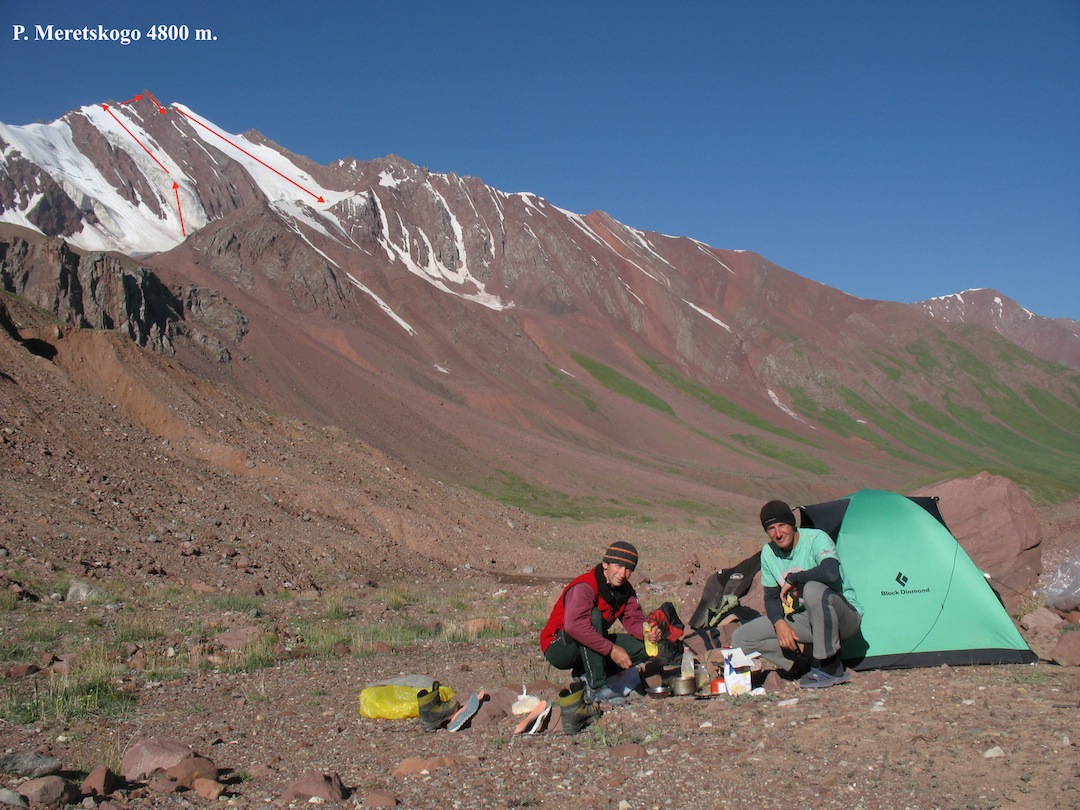 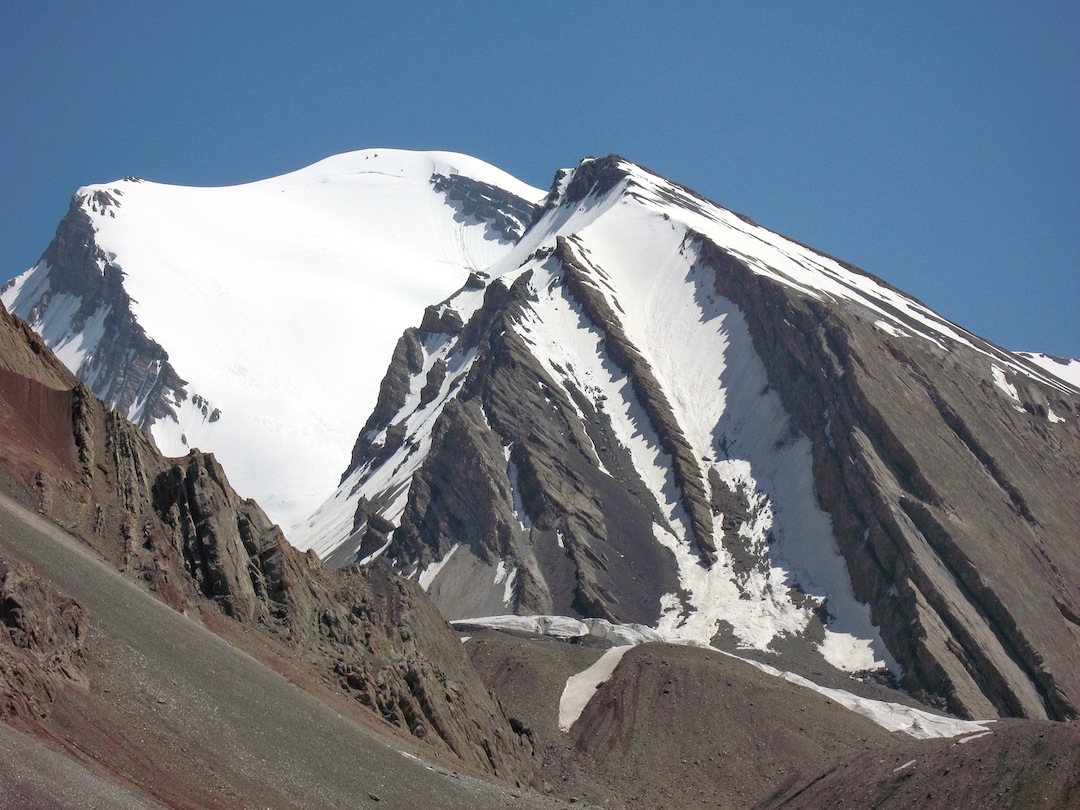 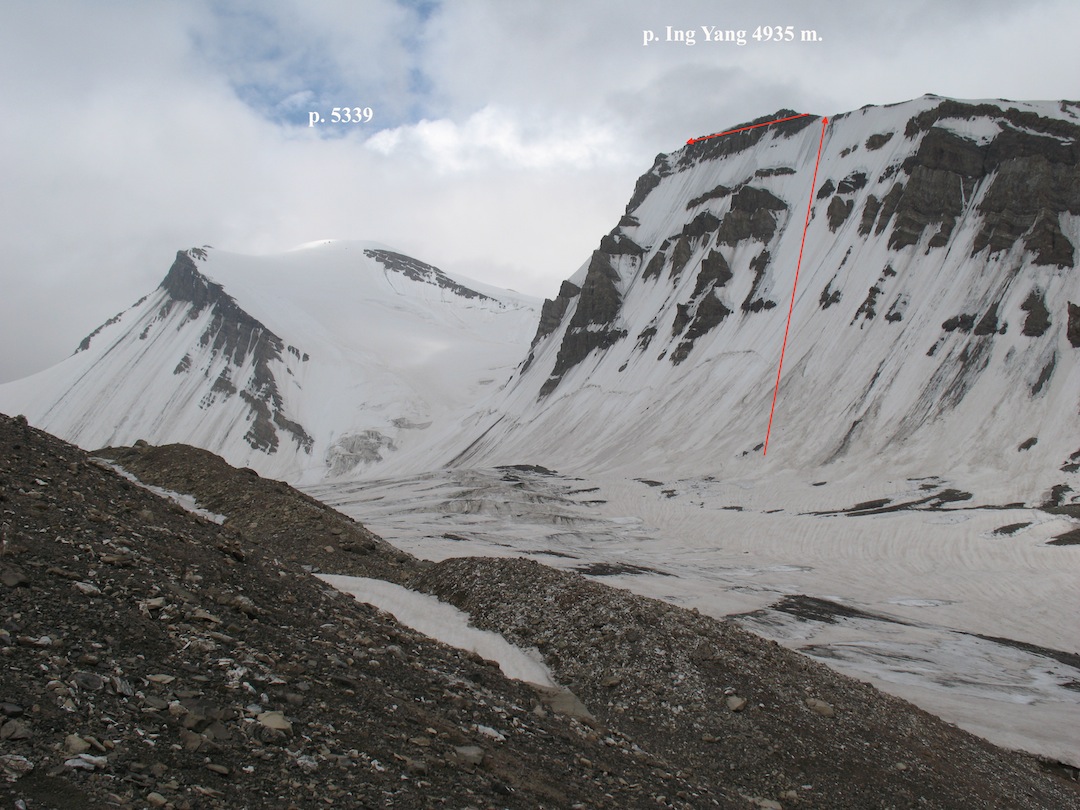