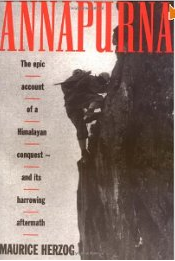 As the evening shadows gathered on June 3, 1950, the chances seemed slender that 31-year-old French climber Maurice Herzog would see the next morning, let alone his 93rd birthday. At about 2 p.m. that afternoon, he and Louis Lachenal, climbing without oxygen, had been the first two people ever to reach the summit of an 8,000-meter peak, Nepal’s 8,091-meter Annapurna. No would-be climber had ever even approached the mountain.

But now, exhausted, hypoxic, and with his hands freezing after he lost his gloves, Herzog stumbled down the mountain behind Lachenal, into darkness and a gathering snowstorm. As he approached the high camp where Gaston Rébuffat and Lionel Terray waited for the summit party, Terray heard Herzog’s approaching footsteps and bounded from the tent to greet him. Terray grabbed Herzog’s hands, only to find to his horror, as he would later write, “that I was shaking an icicle.” And then things started going seriously wrong.

Maurice Herzog was born in Lyon, France, on January 15, 1919, into a mountain-climbing family. He was a student when the Second World War broke out in 1939, and in 1944-45 fought with the French Resistance in the Alps against the occupying German army. After the war he joined a French tire company as an executive.

Herzog was a talented amateur climber, although by no means in the front ranks of French alpinism. But in 1950 the Federation Française de la Montagne appointed him leader of the first major postwar French expedition to the Himalaya, with permission from the Nepalese government to attempt either 8,167-meter Dhaulagiri, the world’s seventh highest peak, or neighboring Annapurna, the tenth highest. The expedition spent their first month in the region, April 1950, attempting to find a route on Dhaulagiri without success, and in mid-May, with the monsoon approaching, switched to Annapurna. There too they ran into dead-ends, until they turned their attention to Annapurna’s north face. Finally, with Terray setting a ferocious pace as lead climber, they found their route. But Terray had worn himself out, and so it was Herzog, who had performed strongly on the mountain, along with Lachenal, who set off on their summit day on June 3, 1950.

The descent from Annapurna turned into an epic retreat—by June 5, two men with frozen feet were leading two snow-blind men down the mountainside to the safety of a lower camp. They returned to France as national heroes, but paid a stiff price for their achievement. Lachenal lost all of his toes to frostbite, Herzog both his toes and his fingers. While recuperating in the year that followed, Herzog wrote the most successful expedition book of all times, titled simply Annapurna in its English edition, selling over 11 million copies. It closed with what became one of the most famously inspirational lines in mountaineering history: “There are other Annapurnas in the lives of men.”

In his own later life, Herzog held a number of government posts, including minister for youth and sport under Charles De Gaulle, and mayor of Chamonix. He was also a member of the International Olympic Committee. In the past decade, several books questioned his judgment on Annapurna on that June day in 1950. He was accused of subsequently downplaying the role of other members of the expedition, especially that of Lachenal. But, unquestionably, Herzog’s acceptance of a higher level of risk than was common on previous expeditions to 8,000-meter peaks ushered in what is sometimes called the Golden Age of Himalayan Mountaineering, and pointed the way to the future of climbing in the region. Herzog died at his home in Neuilly-sur-Seine, France, on December 14, 2012.