Li Yuan, Zhang Xiaohui, and Zheng Chaohui made the first official ascent of the north summit of Zhalaqueni, reaching the top on January 27, 2013. The three spent three and a half days climbing directly up the east face by a new line they named Excavator (1,300m, WI4+ AI3+ M5). Over the last 10 years approximately nine teams have tried unsuccessfully to reach this summit, though one unauthorized ascent is reported.

Climbing in alpine style, the three started from base camp at 4,095m on the January 24, making their first camp at 4,857m. Immediately above lay challenging deep snow, then several pure water ice pitches and harder mixed ground. Camp 2 was placed at 5,127m. On the third day they spent 12 hours climbing less than 300m. Thin ice and broken rock provided the mixed crux at AI3+ and M5. The final camp was at 5,407m, where they had a bad sitting bivouac, enduring frost nip to the fingers. On the morning of the fourth day, 150m up the northeast ridge led to the summit. They descended to the site of Camp 2 that night.

Winter provides the most stable climate in this region. The summit day was windless but savagely cold. 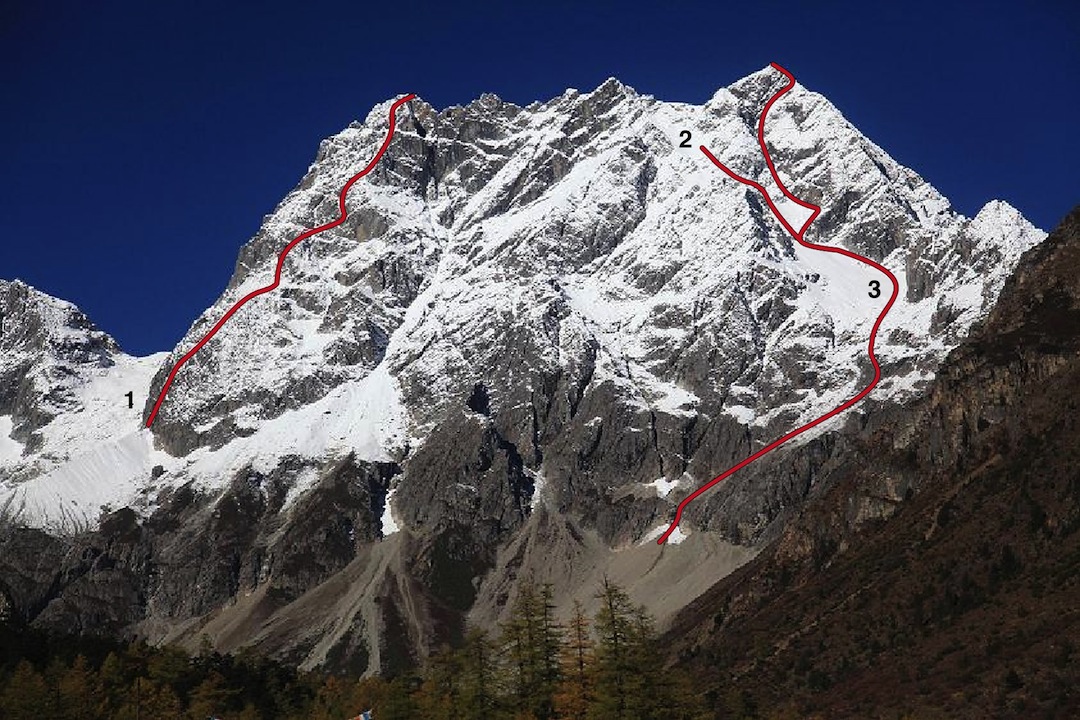 The east face of Zhalaqueni. (1) Road of Progress, to the South Summit. (2) Jing brothers attempt in 2006 on main summit. (3) Excavator, climbed in the winter of 2013.
Sun Bin
Previous Next

The east face of Zhalaqueni. (1) Road of Progress, to the South Summit. (2) Jing brothers attempt in 2006 on main summit. (3) Excavator, climbed in the winter of 2013.
Sun Bin
Previous Next