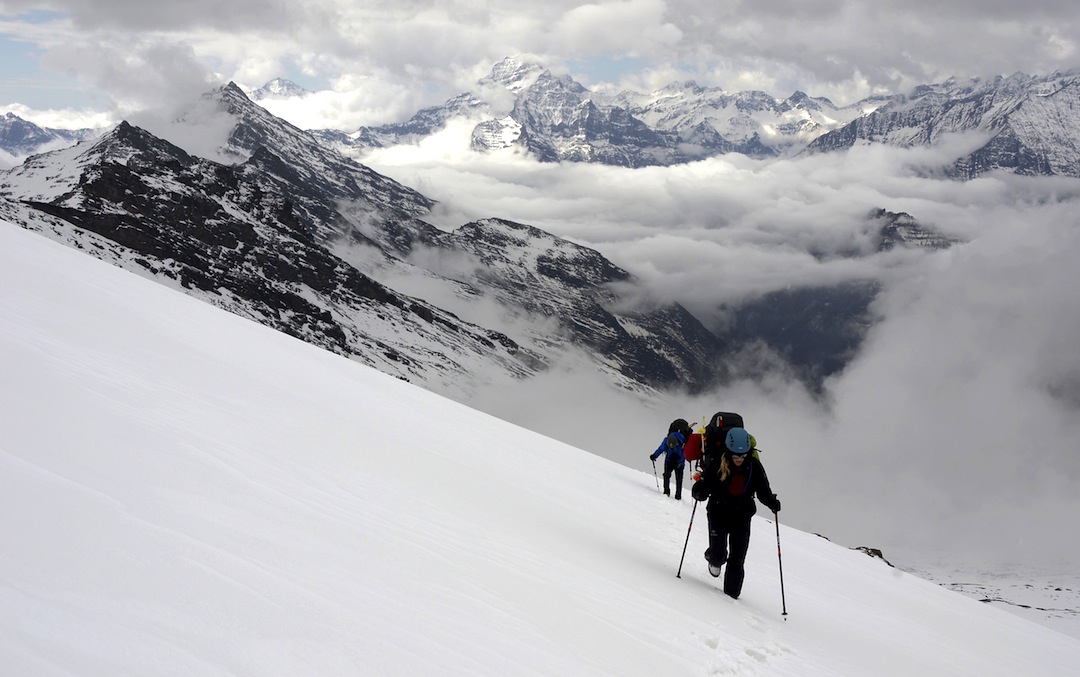 On May 3 Karim Adouane (France), Jon Otto (USA), Su Rongqin (a.k.a. Asu, China), and I made the first known ascent of Xiao Xuebaoding (32°38’29” N, 103°53’16” E,), a peak we referred to as Little Xuebaoding, the second highest in the Min Shan. In the absence of detailed, up-to-date maps we mainly relied on GPS to traverse a rugged landscape of gorges, rivers, and dense bamboo forest to a base camp at 4,000m. The weather throughout was unpredictable, with rain, hail, and snow that led to total whiteouts. After a few days of acclimatization, we set up an advanced camp at 5,000m. Winds were strong, temperatures low, and routefinding challenging. Having waited two days in our tents for a storm to pass, we made a summit attempt with only one day’s provisions remaining.

We left camp at 4 a.m. on May 3, climbing up to the northeast ridge. Conditions were difficult, with loose, waist-deep snow releasing from the mountain. Ropes were fixed on certain sections. A mixture of frozen scree, ice, rock, and loose snow made the ascent exhausting. We reached the summit at 11 a.m.; the route was around D 5.6 WI3 M4. After returning to our high camp we navigated the terrain southwest, crossing crevassed glaciers and the hidden Tibetan valleys of Mafeng, eventually reaching connecting roads leading to Songpan, where our expedition ended.

Editor’s note: The highest peak in this area, 5,588m Xuebaoding, which lies about six kilometers to the northwest, may have first been climbed in 1986 by an expedition from the Himalayan Association of Japan. However, the ascent was disputed by a second expedition from the HAJ, which claims to have made the first ascent in 1991. The 1992 AAJ reported that, also in 1991, another Japanese party, the Sagama Family Alpine Club, led by Kazuo Yamagagishi, made the first ascent of Xao (or Xiao) Xuebaoding (5,440m) via the southwest face. However, through the kind assistance of Tom Nakamura and Kinichi Yamamori, this is now known to be incorrect. Immediately south of the marked name Xao Xuebaoding (no height quoted) on the map in A Guide to Mountaineering in China lies the subsidiary top 5,026m. It was this that the Japanese climbed, thinking it was the named peak. Recent updated Chinese maps mark both this summit and Xiao Xuebaoding. The Min Shan is the most northeasterly massif in Sichuan, situated directly north of Chengdu.