Andrey Muryshev, who attempted the difficult northwest ridge of Shiva in 2010, was one of very few people to have seen in detail the new route Paul Ramsden and I hoped to try, and had been extremely helpful with information and photographs. In his e-mail, which arrived the month before we were due to leave, he didn’t rate our chances too highly. “Frankly, I cannot imagine how you will do it. Do you mean the northeast buttress? It is ca 700m of climbing above the col and it is October—all the rock will be frozen. On the other hand, the ice will be scarce, as the buttress is very steep. So it will be very hard dry tooling and very hard protection. I saw your route on Siguniang. It is much easier. Still, your idea inspires me.”

Paul and I took the view that being inspired was good. It looked a great line, and we had to give it a go. And maybe it would turn out more amenable than it looked in Andrey’s photos.

And so by early October we had flown to Delhi, driven for two days to the road head at Saichu, walked for one day with horses, and then, with the help of a few hastily mustered porters, ferried our equipment up to a base camp at 3,900m in the Tarundi Valley. Above and to the west, the Prow of Shiva, as we christened it, looked challenging. But it also looked safe from objective danger, and through binoculars it appeared that the area’s predominately loose, shaley rock gave way to granite as the Prow started to steepen.

Acclimatization consisted of four nights out from base camp, checking out the approach to the Prow and sucking in as much thin air as possible. A peak at ca 5,500m on the ridge stretching north from the Prow gave a fine climb and a wonderful point for viewing our intended route.

We began our attempt by taking two days to get through the complex glacier terrain leading to the foot of the east flank of the ridge. The next section, gaining the crest of the ridge at the start of the meat of the route, caught the morning sun. We climbed it during the night, reaching a great “chop the top off the ridge” bivouac spot at 9 a.m. the following morning. Challenging snow and ridge climbing led to what looked to be an impasse. The crest of the buttress was indeed granite, but the hoped-for ice on the smooth slabs of the north side was, at this point, too thin and intermittent for us to climb. The crest was very sharp, and dismissing the northerly slabs left only one other possibility: aiding an overhanging crack on the east side and hoping that the fault line, which eventually crossed to the north side, would continue in a climbable fashion. Fortunately it did.

After a fine bivouac on an undercut rock balcony, with several hundred meters of space beneath our feet, the climbing continued up off-vertical, ice-choked cracks, fortunately with good protection every now and then. Paul enjoyed a memorable ice axe belay, and I recall a particularly memorable lead, struggling up a blank overhanging groove to gain a steep, wide, snow-choked crack. The climbing ranged from numerous pitches up icy cracks in Chamonix-style granite to long, protectionless leads on thinly iced slabs reminiscent of winter climbing on Ben Nevis.

On our sixth day out from base, mixed climbing up steep grooves and exciting detached flakes led us to below the final area of vertical rock. A ledge system leading right, around the crest, gave us hope of sidestepping this obstacle and reaching the summit that night, but an unexpected impassable gap and afternoon bad weather saw us bivouacking again. The only way out was an ice-choked chimney splitting the headwall. My lead was not the most elegant, but by 10 a.m. on day seven we reached a final snow ridge and broke through a cornice to reach the summit. The panoramic view south was glorious. It had been a brilliant climb, and a short hug was felt to be appropriate.

After a bivouac not far below the top, we descended the upper part of the south ridge. Our plan had been to go down an unclimbed spur marking the south end of the east face. The other two members of our team, Steve Burns and Ian Cartwright, had attempted to climb this, but were turned back in the face of poor snow conditions. From its top we too felt conditions didn’t look good and so (with much peering at images of the east flank stored on our digital cameras) we continued further down the south ridge to a snowy saddle more or less marking its lowest point. From there we descended hard left, though icefalls and rock steps on the southeast flank, to reach the lowest snowy saddle on the east spur that we had originally planned to descend. We crossed this, picked up Steve and Ian’s tracks, and followed them down to base camp, arriving at lunchtime on day nine.

Editor’s note: Although the first ascent of Shiva has been widely reported as taking place in 1988, correspondence with Tsunemichi Ikeda of the Japanese Alpine News reveals that the mountain was first climbed in 1973 by an expedition from Rikkyo University Alpine Club, led by Shigeru Suzuki. This team climbed the south ridge. The second ascent took place in 1975, when a Toyohashi Alpine Club expedition, led by Hiroaki Kaneda, climbed the southwest face and south ridge. Two other parties, Japanese and Indian, have repeated this line. 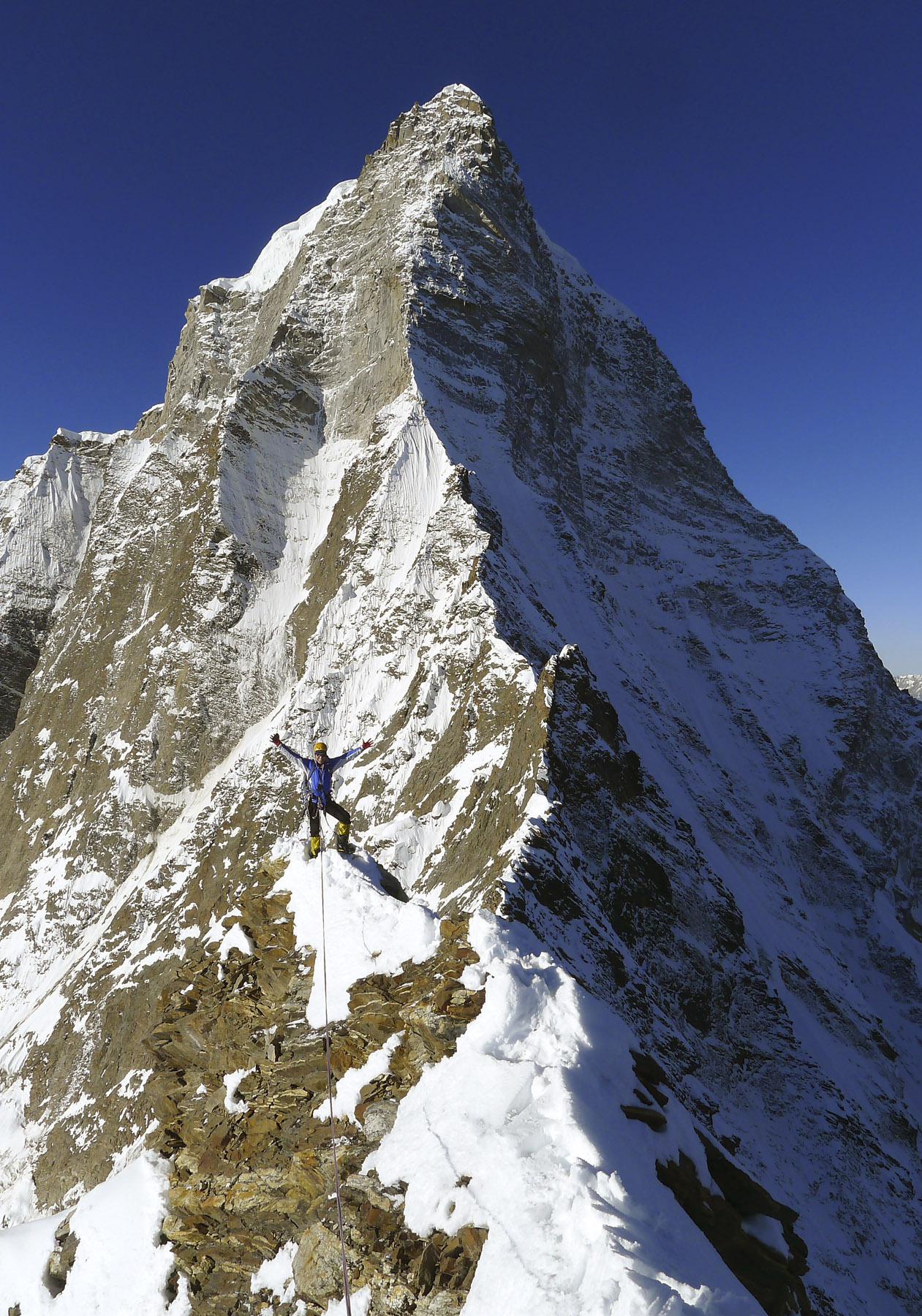 Mick Fowler on the summit of Point ca 5,500m, with the Prow of Shiva behind. Paul Ramsden
Paul Ramsden 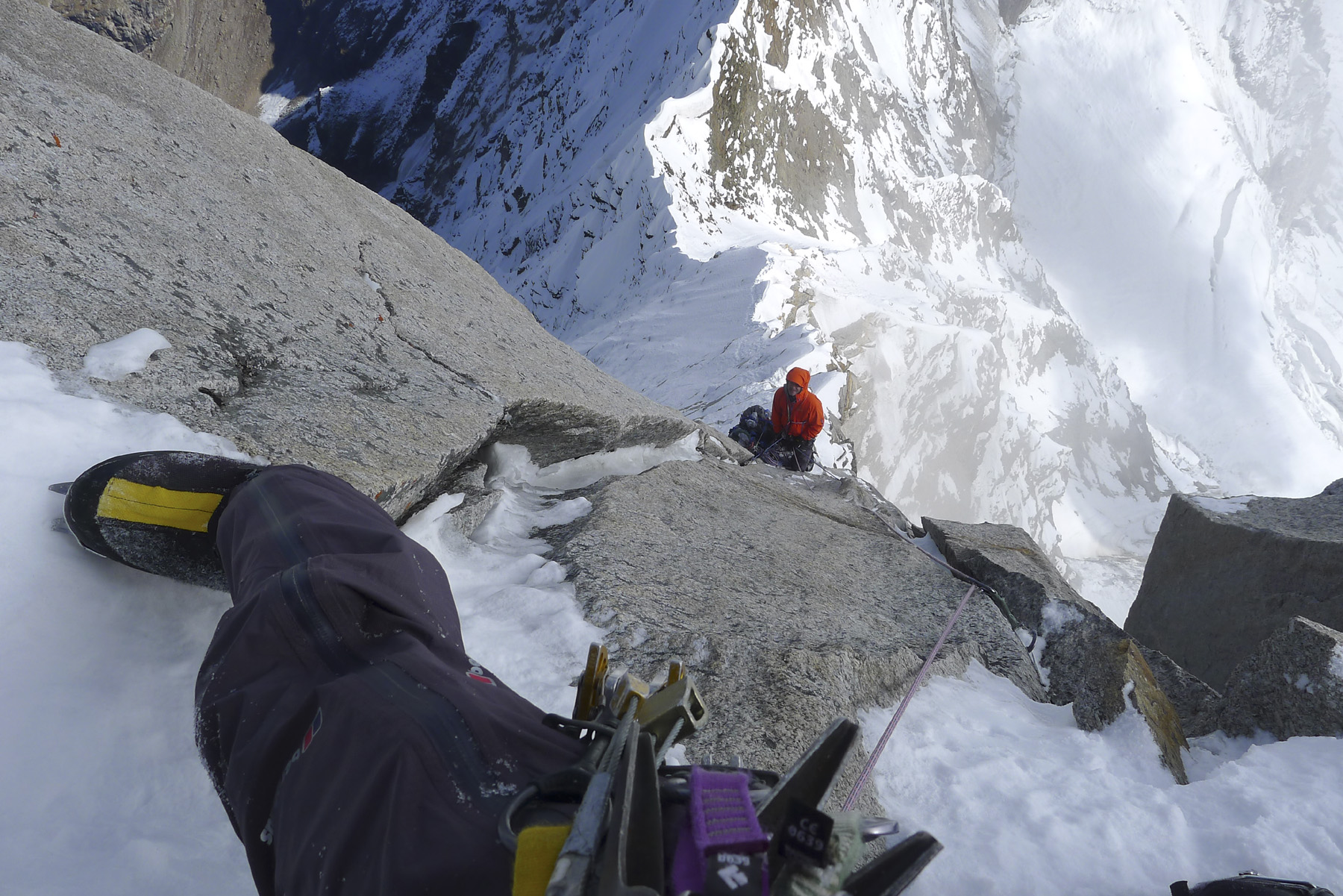 Mid-pitch on the first third of the Prow. A view down to Paul Ramsden on belay during the fifth day out from base camp. Mick Fowler
Mick Fowler 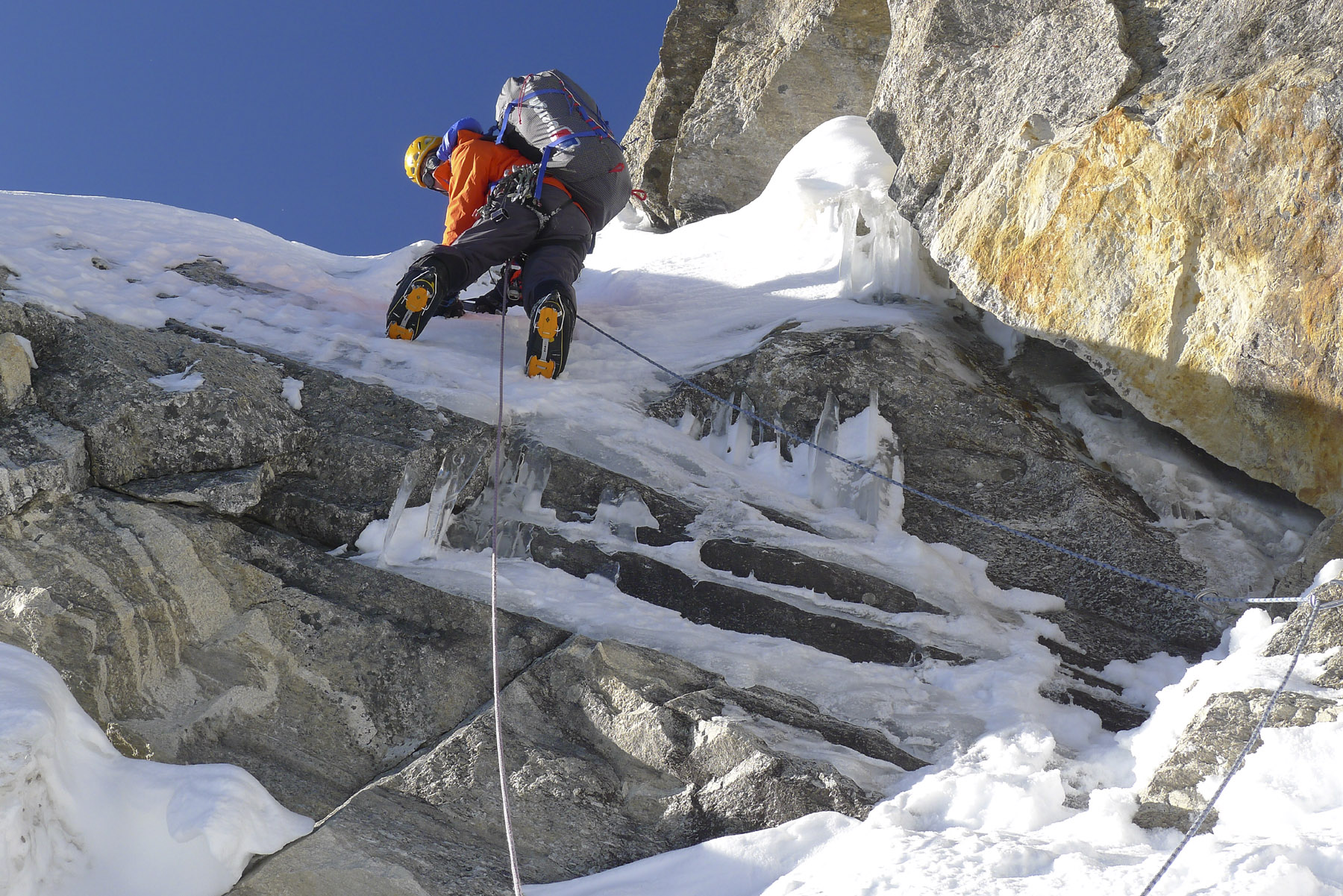 About halfway up the Prow, Mick Fowler heads up the first pitch on day six above base camp. Paul Ramsden
Paul Ramsden 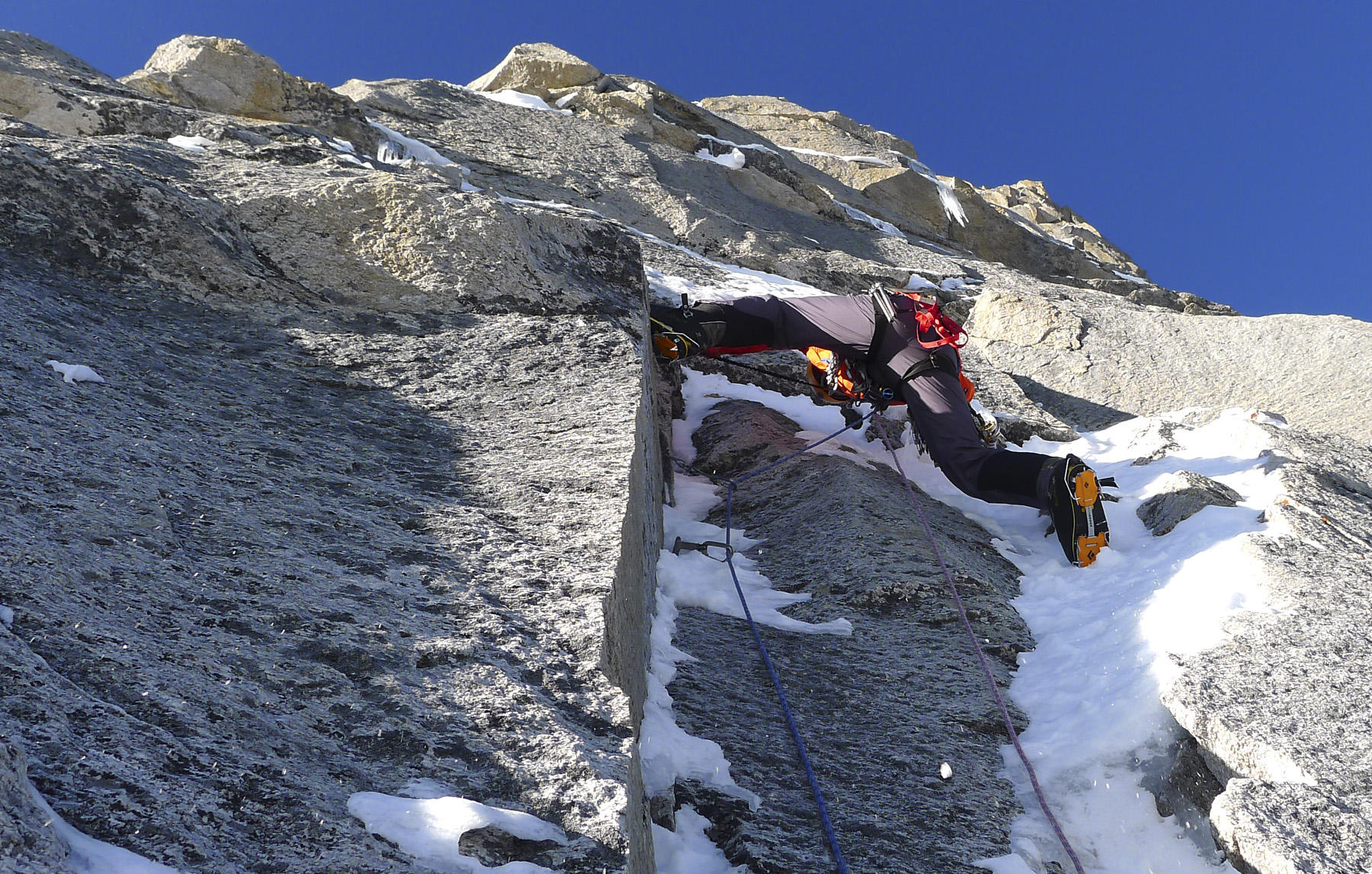 Paul Ramsden works through steep granite on the lower third of the Prow, five days out from base camp. Mick Fowler
Mick Fowler
Previous Next

Mick Fowler on the summit of Point ca 5,500m, with the Prow of Shiva behind. Paul Ramsden
Paul Ramsden

Mid-pitch on the first third of the Prow. A view down to Paul Ramsden on belay during the fifth day out from base camp. Mick Fowler
Mick Fowler

About halfway up the Prow, Mick Fowler heads up the first pitch on day six above base camp. Paul Ramsden
Paul Ramsden

Paul Ramsden works through steep granite on the lower third of the Prow, five days out from base camp. Mick Fowler
Mick Fowler
Previous Next