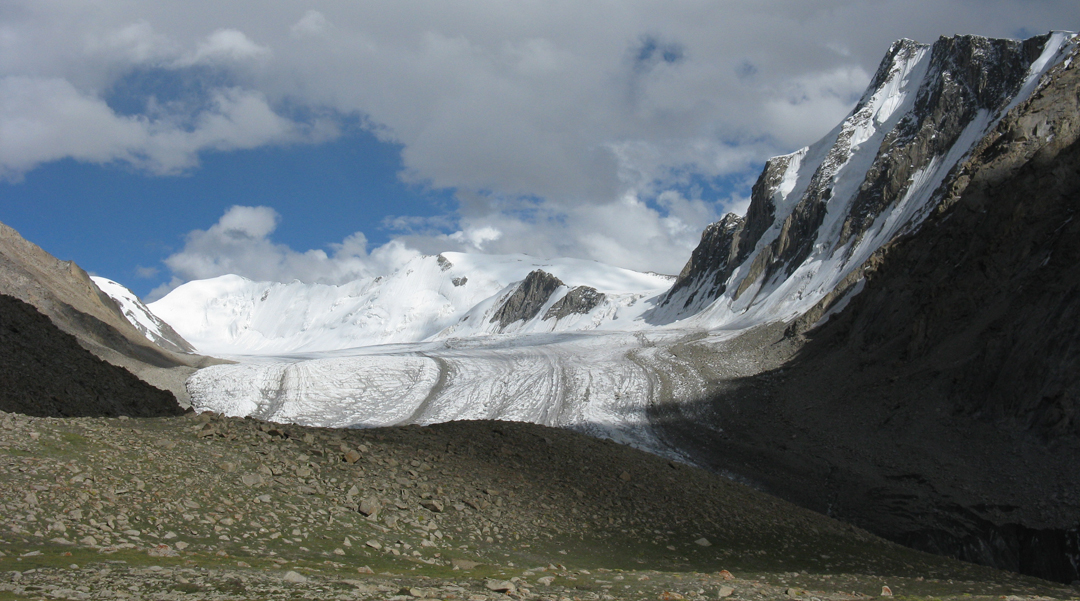 We were a modest group of four climbers: Dr. Jeff Dolinsky, his wife, Joan, and me, all from Canada, along with Andy Selters (USA). We were accompanied by climbers Kunzang Sherpa (sirdar) and Arvind Raman (LO), two climbing staff, Nangang Bhote and Danuru Sherpa (Dawa), and three cooks/support staff. Our objectives were at the head of a beautiful and remote valley called Rongdo in the Nubra area of Ladakh. It is situated between the east and west arms of the Shyok River, and north of the Indus. In 1909 Tom Longstaff traveled close to what is today Rongdo village (3,000m) while exploring the Siachen Glacier and Saltoro areas. It gave me quite a thrill to look west across the lovely, wide, meandering Shyok, and imagine Longstaff moving slowly up the opposite bank on his way north—to be so close to his footsteps!

Rongdo valley has seen virtually no tourism, save one Indo-American mountaineering expedition in 2005. This team descended the valley in two days from the Satti area to the north [AAJ 2006]. I initially called the four main peaks at the head of the valley Rongdo I to IV (all just over 6,000m), but we have since applied local names consistent with Tibetan culture, which forms the foundation of Ladakhi society. These names have been registered with the Indian Mountaineering Foundation.

On August 5 we headed northeast up Rongdo Valley from the village, following the south side of the river. We finally established base camp on the 10th at 4,802m, and advanced base at 5,181m on the 14th. This latter camp lay just below our main climbing objective, Ngapo Kangri (“blue sheep” in Ladakhi) or Rongdo I (6,350m). This was a glorious, grass-covered camp, suitable for casual football and Frisbee.

On the 18th, after several reconnaissance trips, eight members of the team climbed the west sub-summit (6,000m) of Balden Lhamo (named after a female goddess) or Rongdo III. They reached the col between Rongdo III and IV, then continued up the southwest ridge, returning to camp in a 10-hour round-trip. On the 22nd, six climbers ascended Chamba (the future Buddha, 6,170m) or Rongdo II via the southeast glacier (10 hours round-trip). On the 23rd, Nangang and I climbed the upper west rock ridge of Ngapo Kangri to about 60m below the corniced summit (12 hours round-trip). At the same time Andy and Arvind were ascending the same peak via its south-facing slopes, first on talus and rock ledges, then up the avalanche-prone southeast aspect to easier-angled slopes, from which they finally gained the summit (14 hours round-trip).

On the 27th, Arvind, Dawa, Kunzang, and I headed up the main glacier to attempt the true summit of Balden Lhamo (6,120m). We placed a high camp at 5,690m. After an early departure next morning, we got to the col at 6,060m above the icy headwall but retreated in the face of poor weather and more technical ice than we were prepared to climb.

On the 29th, Andy and Nangang left a high camp at 5,181m, several kilometers northeast of our advanced base, to climb Gazgazri (Ladakhi for the lammergeyer vulture, 6,160m). They ascended the southwest ridge, then traversed onto the icy south face. Several short pitches, the last being 70° hard ice, led to the summit dome, and thence the highest point. They returned to base camp after a 14-hour day.

After a memorable last night at base camp, singing freely together around a huge dung fire, our well-harmonized group began the descent of the enchanting Rongdo Valley, taking two days to reach the village. During this time we were once again astounded by solid-looking rock walls several hundred meters high on both sides of the valley—a rock climbers’ paradise.