This route is certainly one of the best first ascents I have ever done, especially given the enormity of the wall. While I was unsure how difficult some sections would be, the route looked fairly obvious and of good quality. In 2012 I attempted the potential line a few different times, but with bad weather I was not successful, and so had to put it off until this year. Thus, in January of 2013, I set off again with Sergio Tartari, a great friend and partner.

We failed on our first attempt due to bad weather, and managed instead to repeat one of the best routes on the north pillar of Fitz Roy, Mate Porro y Todo lo Demás. After that, we rested and relaxed in El Chaltén and looked for a third partner for the new route. Finally, Serginho called his friend Flavio Daflon in Rio de Janeiro, and with luck, Flavio appeared in El Chaltén the afternoon before our next attempt, totally ready to go.

Samba Do Leao from Luciano Fiorenza on Vimeo.

We left El Chaltén in poor weather, headed for Piedras Negras, on the afternoon of February 22. The next day we started early, and at about 8:30 a.m. we arrived at the base. We waited for the sun to hit the wall before we began climbing. Sergio led off first by climbing a dihedral on a pillar that protruded from the middle of this smooth wall. We had spent so much time going over photos and videos beforehand that we had already divided the climb into sections: Primero Muro, the lower section ending on Gran Hotel; the imposing ridge of the north wall, Segundo Muro; and the final section up to the summit, the Headwall.

The crux of the Primero Muro was a traverse that connected a pillar with an obvious dihedral that dominates the middle of the wall. Sergio arrived just where we had planned after three long pitches of 6b/6b+, which was slightly easier than we had anticipated. Next, it was my turn. I put in a bolt to protect a blank section and connected to the big dihedral. From then on it was great climbing in the shade. When we arrived at the Grand Hotel we had a welcome rest.

The beginning of the next day was tough, but once the sun heated up the wall, the quality of the Segundo Muro was obvious. The line we chose was split with cracks. By the middle of the second day, our line appeared to stop, and it became apparent that we would have to get to the wider crack system next to us. Luckily, the photos revealed a crack that began just where the dihedral we were climbing ended. Without being able to see it from below, but with faith in our photos, we connected the climb by a perfect line. Once we arrived on the northwest arête, we settled in for the night, and were rewarded with a beautiful sunset awash in colors and clouds.

The third day was fairly windy but sunny, and the climb was sheltered and somewhat warm. On pitch 12 we joined the second and third pitches of the Hoser Chimney, then we crossed Afanassieff, and then on the “Headwall” we went to the left of a variation of Gabriel Rocamora y Susy Tarditti. Without knowing about this variation, we shared about 30m through the middle of this third wall, and after that, our route headed right.

Many times I wondered why nobody had tried to climb this obvious route. It seemed the only answer was a big roof with a wide crack on the third headwall. However, we climbed around the roof via the face to the right, making the climb relatively easy, even though it took a few tries. The top had perfect cracks in orange granite; one could choose whichever size looked the most appealing! We reached the summit at about 4:30 p.m. and descended the Franco-Argentine route. At last light we arrived at the Brecha de los Italianos, bivied, and continued the rappels at first light. I named the route Samba do Leao to honor my two Brazilian friends on the first ascent, and for the challenge this climb meant to us, with each section representing a distinct lion hunt (1,300m, 6b+). 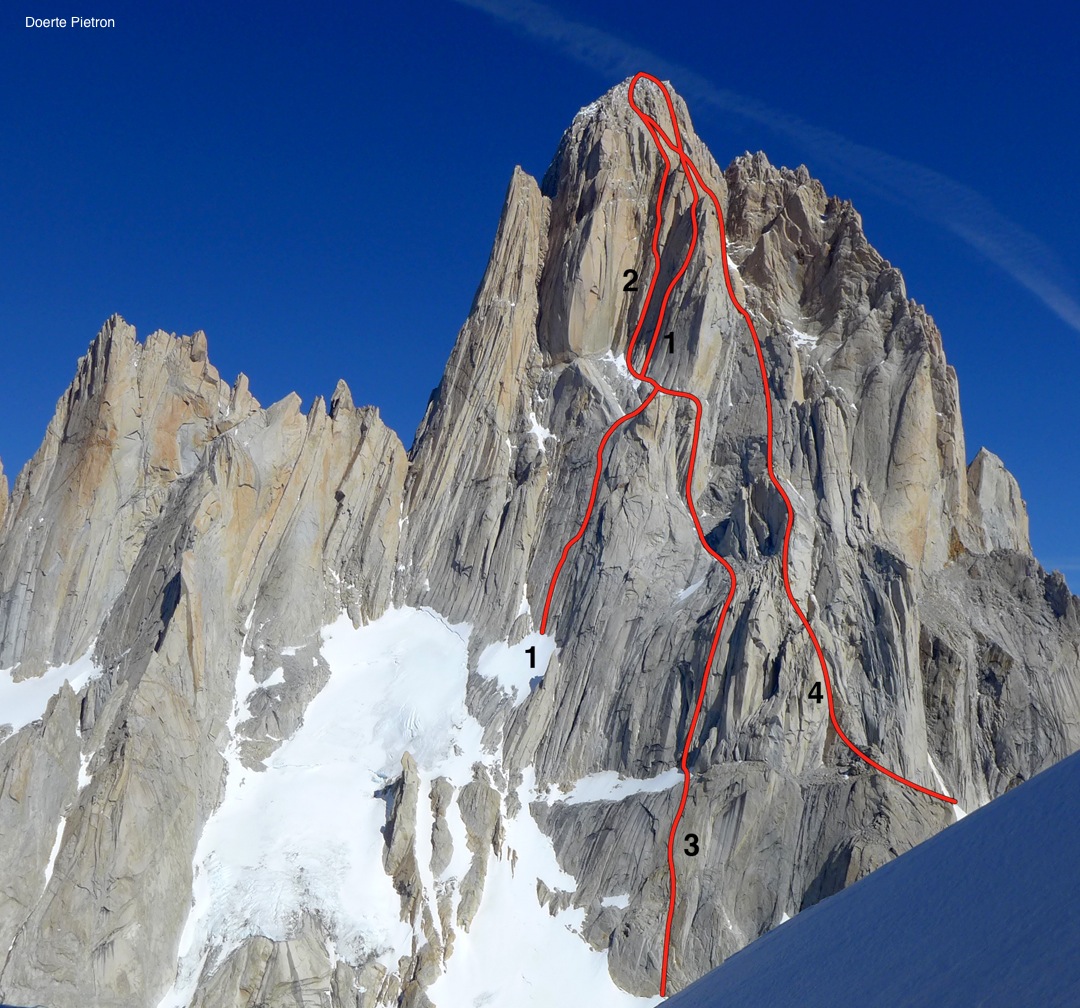