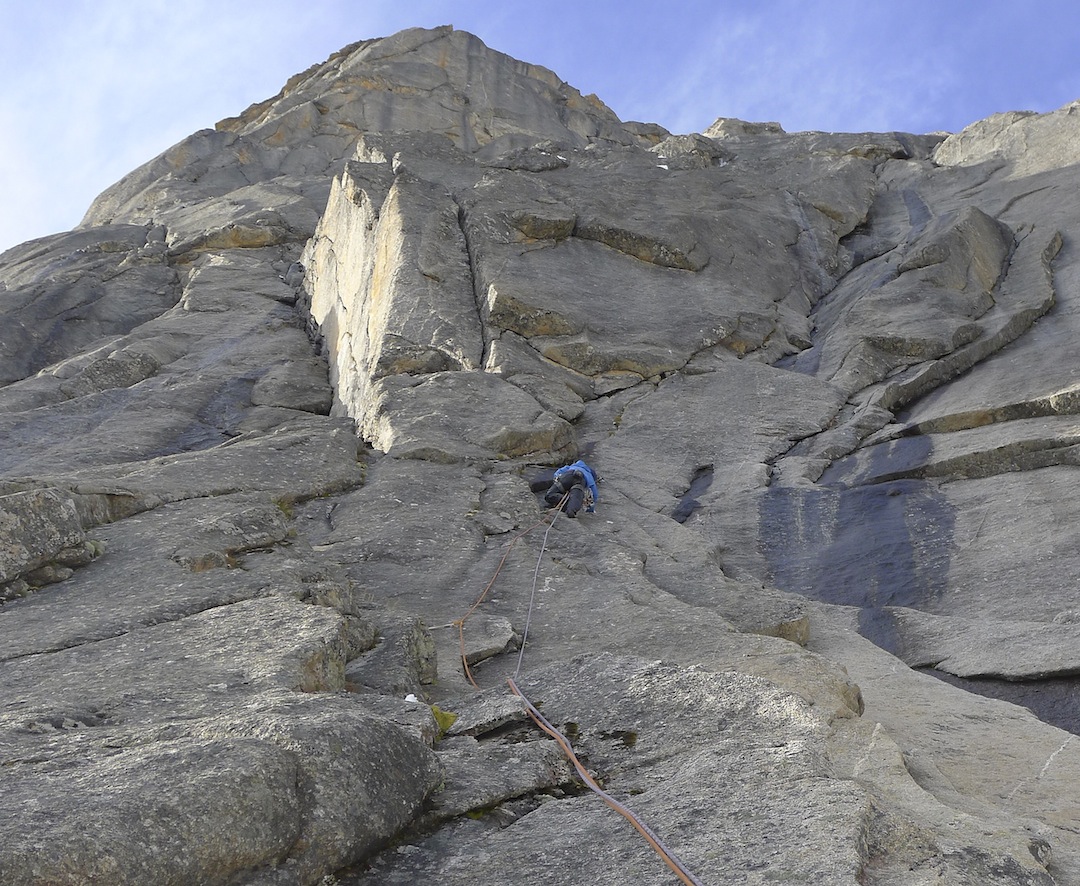 In August 2010, Li Yue and I spent 10 days exploring five different side branches of the Shuangqiao Gou. In late July 2011, I returned with Ye Feng, Wu Peng, and Gong Xiaorui and spent another 10 days walking up the Shuangqiao and then around the northern part of the range, before making base camp at 4,100m in the Daogou, where we were joined by Zhang Yunping. On August 7 we summited unnamed Peak 5,062m on the ridge that rims the north side of the valley, running southeast from Potala Shan and Eagle Peak (and forming the watershed between the Daogou and upper Changping). We climbed the left side of the southwest face in 13 pitches. The first third was in a groove line, the second face climbing, and the final third on a ridge. Nearly all the climbing was less than 5.7. We started at 3 a.m., took three and a half hours to reach the base, and then climbed for five and a half hours to the summit. We rappelled the route and were back on the ground at 5 p.m. We named the route Rising Wind Horse Flag (650m of climbing, IV 5.9+). There was loose rock in the initial groove, but generally the granite was very good. We heard rumors that the peak might have been climbed by the Japanese Yoshiaki Seno, via a solo ascent up the center of the southwest face. However, we saw no sign of rappel anchors.

After a rest day Ye Feng, Zang Yunping, and I made the first ascent of Peak 4,970m. This lies on the continuation of the ridge running southeast from Peak 5,062m and is situated ca 2km north of Daogou West (5,422m, Brown-Thomas, 2006). It took more than three hours to reach the foot of the east ridge, which we climbed in six pitches to the summit (350m of climbing, IV 5.9+). There was no evidence of a previous ascent. In our two visits to the region we spied more than 20 enticing granite peaks with dozens of potential lines, from alpine rock routes to big walls.

In October 2011, Wu Peng, Gong Xiaorui, and I returned to the valley for another attempt on Shark’s Fin, which lies on the watershed ridge between Peaks 5,062m and 4,970m. We had tried a line in 2010 and retreated just above 4,900m. After waiting 24 hours for the wall to dry, we started from camp at midday on the 5th, opting for a single push due to the uncertain weather. We carried down jackets and an emergency blanket but no other bivy gear. From 2 p.m. to 1 a.m. the following morning we climbed 11 pitches, after which we decided to wait until sunrise on tiny ledges; there was no sleep that night. Above, 20m without protection and some easy moves got us to the east ridge, ca 50m below the summit. We could see a runner left by the Americans who almost made the first ascent from the opposite side. [In 2010, Chad Kellogg, John Dickey, and Dylan Johnson climbed the northwest are?te from the Changping Valley and traversed below the summit block to the narrow east ridge, where they were stopped 25m below the top by steep, unprotectable granite. They carried no bolt kit. See AAJ 2011]. We retreated from this point and got back to camp at 4 p.m. on October 6. This was an awesome line with 600m of climbing at V 5.10b: clean granite, good natural protection, no pegs or bolts.