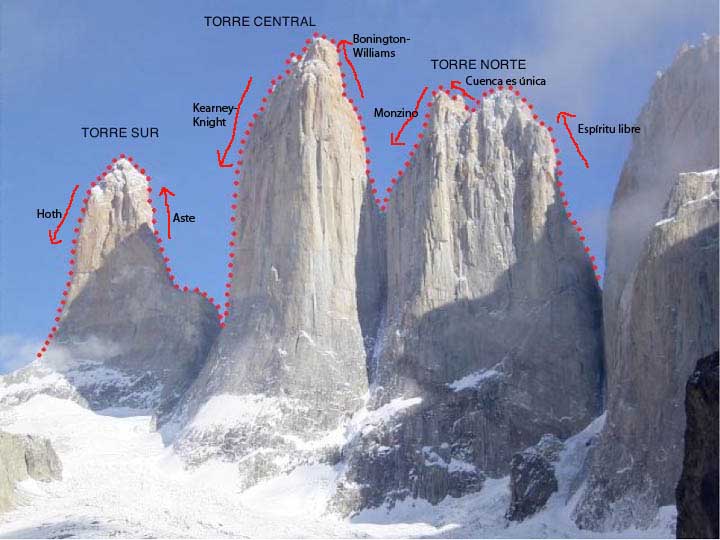 In January 2013, Steve Schneider climbed the South Tower with Ivo Kusanovic and Schneider’s wife, Heather Baer. Kusanovic was the first regional climber (Punta Arenas) to climb all three Torres del Paine, and Baer was the first woman to summit all three towers.

In Februrary, Pedro Cifuentes (Spain) completed the second solo traverse of the three main Torres del Paine after a 29-day endeavor with a portaledge (enduring storms up to eight consecutive days). He began on Espiritu Libre (500m, 5.11 A1), which climbs the north ridge of the North Tower to a subsidary northern summit. He then descended 100m to the gap below the main summit, which he climbed via Cuenca es Unica (250m, 5.11 A1). He then rappelled the standard Monzino Route on the south ridge to reach the gap below the Central Tower. On the Central Tower he climbed the Bonington-Whillans Route (800m, 5.11d A2). From the summit of the Central Tower, he descended the Kearney-Knight Route to reach the gap below the South Tower. On the South Tower he climbed the Aste Route (900m, 5.11 A1) and descended the southeast buttress via Hoth (1,100m, 27 pitches, 5.10+ A4 WI2/3).

In 2002 American Steve Schneider climbed all three towers in a single crossing. In a 51-hour round trip from the Campamento Japanese, he climbed the Monzino Route, up and down, to the south summit of North Tower, the Bonington-Whillans to the Central Tower, and then the Aste Route, up and down, to the South Tower. However, no one prior to Cifuentes appears to have followed the complete skyline of all three towers.

From information supplied by Steve Schneider and Lindsay Griffin