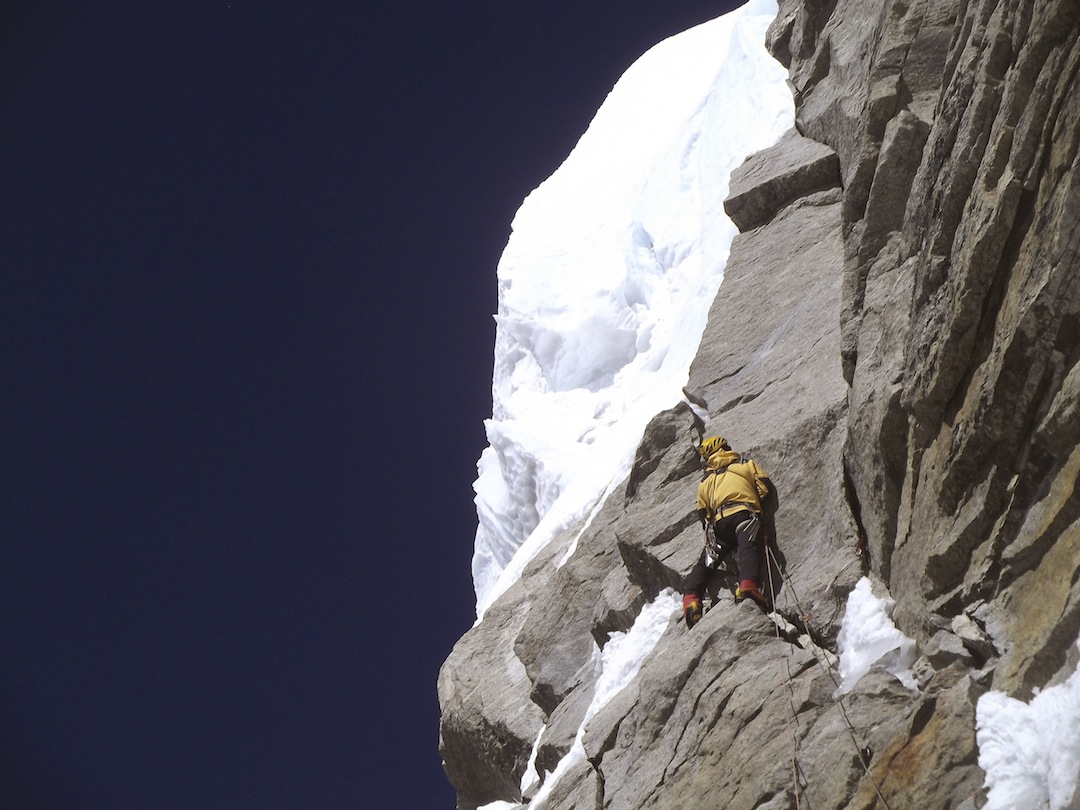 In November Tatsuya Aoki, Yasuhiro Hanatani, and Hiroyoshi Manome made the long-awaited first ascent of the south pillar of Kyashar (a.k.a. Peak 43). After establishing base camp in the village of Tangnag (ca 4,300m, and only a couple of hundred meters below the start of the pillar), the three Japanese acclimatized with an ascent of Mera Peak, then left on November 6 for their attempt on the pillar. Following the Houseman-Stone line (see below), they climbed 17 pitches up the initial rock buttress to a bivouac at 5,200m. Although the climbing was not too difficult (5.8/5.9), they found the rock to be extremely loose. Next day they climbed three pitches through the rock band above (5.9) to reach a shoulder and the hanging glacier in the middle of the route. Crossing this, they climbed five pitches on the upper pillar (5.8) and bivouacked at 5,800m.

Day three saw them climbing a further seven pitches on rock (5.10a on the fourth pitch) to reach a wall of snow they dubbed the Slide. Overcoming only half of this that day, they bivouacked at 6,100m. On day four they finished the Slide and a section of mixed terrain above (six pitches, with three or four leads graded 5.8 and M5). They reached the start of a snow are?te and bivouacked at 6,350m.

Their fifth day proved to be the most taxing. The crux of the entire route was the five-pitch are?te. It took a whole day to cross this section, which featured feather-like, unconsolidated snow up to 80° and was completely impossible to grade. They made a bivouac that night at 6,500m, perched atop a snow mushroom.

Directly above lay a very steep granite headwall. Next morning the three outflanked this by making a 60m rappel left and climbing two pitches up and left at 5.9 and M5, then two more pitches of steep, solid ice to reach the summit ridge. They were taking photos from the top of Kyashar at 4 p.m.—only the second known party to do so—after which they descended the west ridge to a bivouac at 6,250m. On their seventh day they reached the col at the base of the west ridge, between Kyashar and Kusum Kanguru, negotiating four difficult pitches. All that was left was to continue down to Tangnag, where they arrived at midnight. [The west ridge/west face was climbed in 2003 by Sam Broderick, Andi Frank, and Bruce Normand to make the first official ascent of the mountain.]

The autumn was particularly cold, but the route was not affected by the strong winds that plagued other teams in the region, and the climbers benefited considerably from warm sunshine. They named their climb Nima Line (nima means “sun” in Nepali; 2,200m, ED+ 5.10a M5).

Prior to their attempt the ridge had been tried at least six times. Three of these were made by Czech alpinist Marek Holecek. In 2001 he climbed for 60 hours with David Stastny to reach the snow shoulder below the upper pillar at ca 5,600m. He was back in 2005 with Jan Doudlebsky. This time the south pillar wasn’t on, but the two climbed a new line on the southwest face to join the west ridge at 6,500m, from which point they descended. The same pair returned in 2008 and climbed the southwest flank of the south pillar at WI6 and M7 to reach the shoulder, whereupon Doudlebsky’s inflamed tendons dictated retreat.

In 2010 it was the turn of Andy Houseman and Tony Stone. This pair found the southwest flank bare of ice, so they climbed through the rock buttress forming the base of the ridge. It culminated in three long, very loose pitches at around British HVS. The two retreated after gaining the start of the upper pillar at 5,700m. Houseman returned in 2011 with Nick Bullock, but dire weather stopped them getting to grips with the route, and a subsequent attempt on the unrepeated west ridge also failed. Later in the year it was the turn of the French, as reported below.

From information supplied by Hiroshi Hagiwara, Rock and Snow, Japan