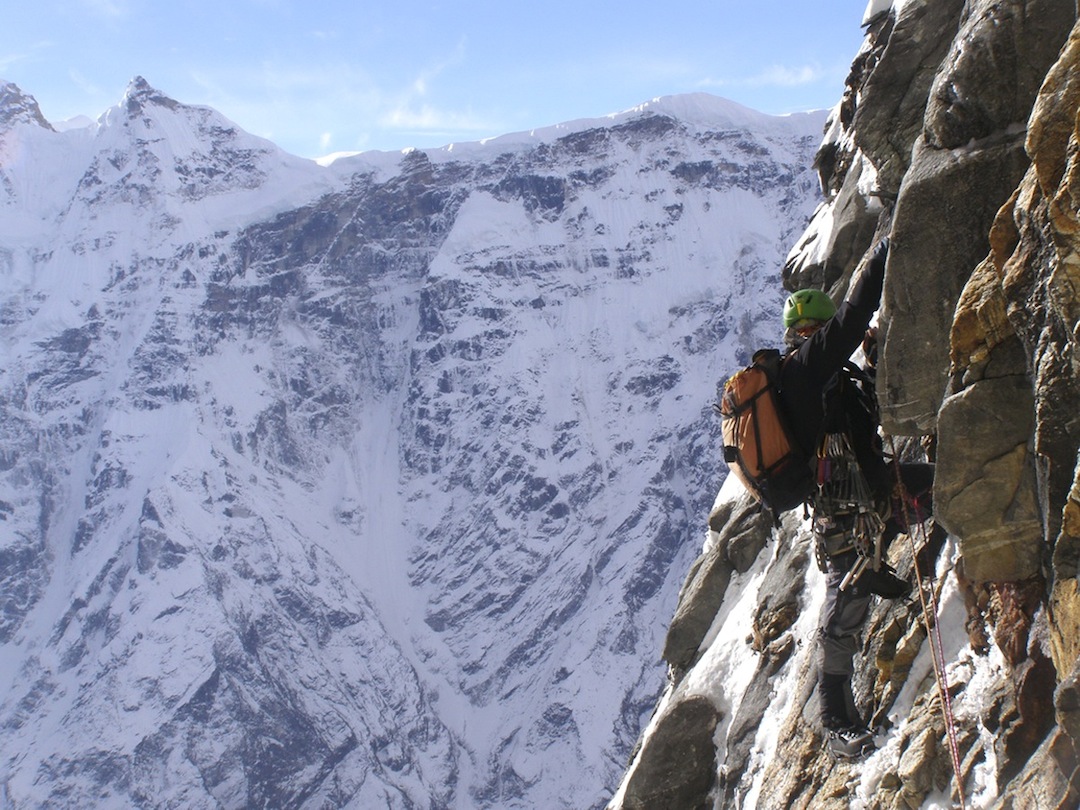 On October 23 Sergey Bublik and Mykola (Nicolay) Shymko made the first ascent of Simnang Himal via an alpine-style climb directly up the steep and difficult south-southeast face. Simnang Himal, formerly referred to as P2, lies immediately southeast of Manaslu across the Pungen Glacier. P1, P2, and P3 (west to east) are points on the long eastern ridge of Ngadi Chuli (Peak 29, 7,871m). The only distinct, and impressive, summit is also the highest: Simnang Himal (100m lower on Google Earth than the official HMG-Finn altitude).

None of these points had known previous attempts until spring 2001, when P2 was brought onto the permitted list mid-season. Ukrainians Mistislav Gorbenko, Vadim Leontiev, Sergei Pugachov, and Mykhaylo Zagirnyak, were part of a larger expedition that season that made the first ascent of the southeast face and east ridge of Manaslu. Their secondary goal was to climb a virgin summit and name it Peak Ukraine, to celebrate 10 years of the country’s independence. They established a camp on a 5,200m col below the east ridge of P2 and made six trips to this col before being granted permission to climb. The knife-edge ridge proved too difficult, so the four gave up and climbed a lower nearby top, which officially they would later refer to as P2, and dub Peak Ukraine. Later Gorbenko went a little way up the Lidanda Valley, south of Simnang Himal. He saw an impressive face, was not sure on which peak it lay, but felt it worthy of future inspection.

In 2004 Ukrainians were back, this time in the shape of Sergey Bublik, Vitali Dobrovik, Sergey Kovalev, Alexander Lavrinenko, and Orest Verbytskiy. They approached the east ridge of true Simnang Himal from the Lidanda Glacier, and all but Dobrovik climbed the crest to a foresummit (east top), estimated to be around 6,200m, but still a long way from the main summit.

In 2007 Gorbenko and Vladimir Moglia led a small team to attempt Himalchuli from the Lidanda. They also made an alpine-style attempt on the southwest face of Simnang Himal and reached a high point of 5,950m on this difficult route, before bad weather and lack of time forced a retreat.

In 2012, Bublik and Shymko had difficulty accessing the valley. They were threatened with a ridiculous financial levy in order to progress further than the Lidanda monastery. Pretending to phone their embassy, and waving ice axes while they did so, they eventually were offered a “bargain price,” though this could only be achieved by leaving accessories such as tables, chairs, and cooking utensils at the monastery.

On October 19, after establishing an advanced base at 4,800m on the Lidanda Glacier, they set off for the south-southeast face of Simnang Himal. Bublik led the first day, taking the pair to a good campsite protected by overhangs. Shymko led the second day, on which they completed the most pitches. On the third day, during which they climbed complex rock sections with poor pro, they got a forecast for bad weather. By this time, having climbed through vertical ice and overhanging granite, they decided that the easiest escape was upward.

The weather came in that night, making the next day a struggle. They had to sacrifice their dream of a totally free climb and use aid in order to progress. That night they stopped well above 6,000m but were unable to find a space big enough to erect the tent. It was a grim bivouac, but in a few hours next morning they had reached the summit in clear weather. They then spent eight hours rappelling the east couloir, and were back at base camp that evening. The route has been named after their sponsor: Redpoint (1,250m, 6c+ A3 M6 WI6).