Today there are at least 17 unique routes to the summit of Korzhenevskaya. Fourteen of them start from the Moskvin Glacier, two from the Mushketov Glacier, and only one from the Fortambek Glacier. The latter, the northwest ridge, is the route of the mountain’s first ascent (Ugarov, 1953), but it has never become popular. This route approaches through a rocky gorge, up three steps of the glacier, and then up the steep northern buttress. The approach is dangerous because of rockfall, and the upper ridge continues for 2.5km above 6,500m. The route may only have been repeated three times since 1953. Our goal was to reach the 1953 route via the west ridge, avoiding dangerous sections of the entrance gorge and the northern buttress of the northwest ridge.

We approached the Fortambek Glacier on foot from Devsiar settlement, planning to have most of our gear transported by helicopter. However, unrest in Tajikistan delayed helicopter flights and disrupted many expeditions, and we were the first climbers at the Moskvina Glade base camp. With no flights, we were forced to acclimatize without our high-altitude boots and down parkas, and did not dare to go higher than 5,600m. After five days we descended to the Moskvina Glade and found it back to normal, with the dining room and bathhouse open for business. Our food and equipment arrived, and after two days of complete rest, on August 5 we started our ascent by trekking to the Fortambek advanced base camp, carrying 30kg packs.

From the Fortambek Glacier the route followed a narrow and interesting gorge to the upper cirque of the pass dividing the Fortambek and Korzhenevskaya glaciers. Remnants of a large glacier hung over the cirque from the west ridge of the massif. We climbed a line of rocks in the gap between hanging icefalls. We managed to cover this distance twice, during exploring and our final push, without being hit by avalanches. Above the level of the icefalls the kingdom of snow began, and here a shovel became our main tool. We used it not only to prepare our bivouacs, but also to clear a path through deep snow all the way up to the ridge. During the exhausting ascent of a 40° slope, we fought with the shovel for every step, before reaching the crest at around 6,100m on August 12.

Now the way was easier, following the winding ridge, narrow in places, with compact snow. Splendid views of the Pamir opened around us. After two days of snow climbing we reached the northwest ridge. We were back on an established route, and psychologically it was easier. However, during the next five days we experienced all the difficulties that befell the first-ascent party on the northwest ridge.

After traversing steep snow around a huge rocky gendarme hanging over our camp at 6,465m, another good section of ridge climbing allowed us to accelerate our pace to a high top of 6,782m. But then the ridge line dropped to a tremendous snow plateau, where we encountered a blizzard and barely avoided treacherous crevasses. Wind, snow, and poor visibility plagued us all the way to the top, and we were back to the same step-shovel-step-shovel routine. Our last camp was at 7,060m, just below the top. Early on the morning of August 19 we reached the summit. The sky overhead was clear, while dense clouds lay below. Over the next three days, with improving weather, we descended the normal route (Tsetlin, 1966), before reaching Moskvina Glade 18 days after leaving. [An extensive report on this arduous traverse, with many photos, is available in Russian at Mountain.ru.]

Alexey Ivanov and Vladimir Petlitskiy, from a report provided by Anna Piunova and translated by Ekaterina Vorotnikova 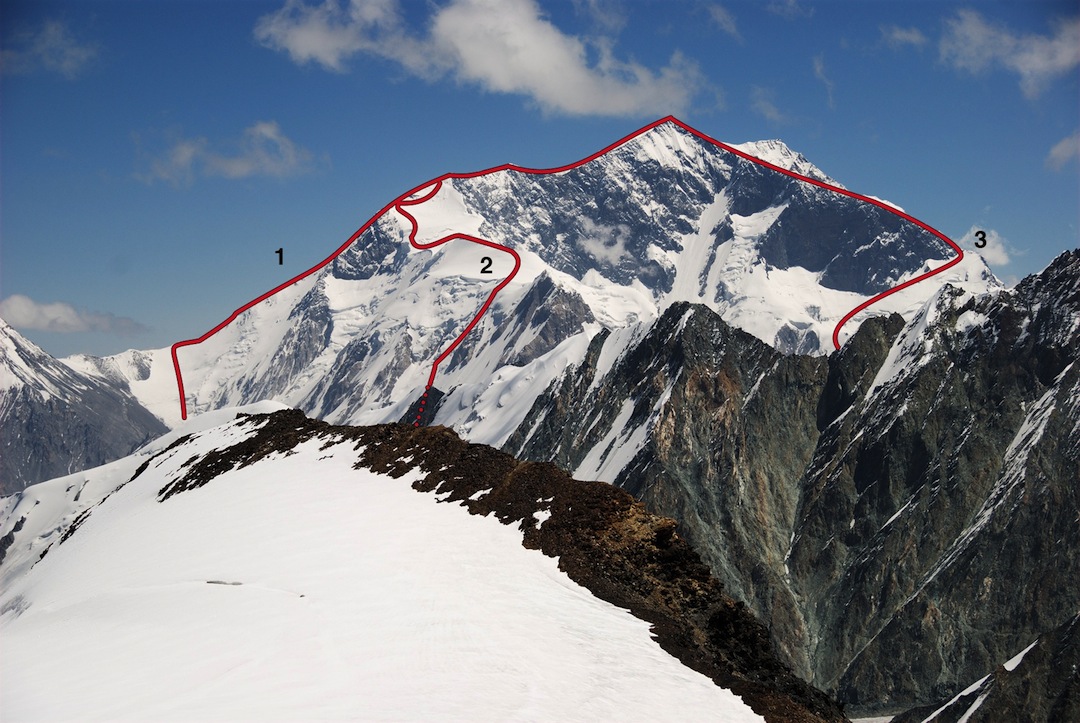