The second International Rock Climbing Festival, organized by the Iranian Mountain Federation and Iranian Alpine Club, took place in mid- October on the magnificent ca 2,700m Bisotoon. This mountain in western Iran, near the city of Kermanshah, has a vast, complex 1,200m limestone wall on the southeast face, variously reported as up to eight kilometers wide. There are approximately 60 routes, leaving plenty of space for additions. The rock is outstanding: generally sound, well featured, and almost uncomfortably abrasive. Several huts are situated on terraces a little above half-height on the face, suitable for two-day summit routes, though many established lines descend from partway up the wall.

The first route on the southeast face was Abarmard, put up in March 1969 by Ebrahim Babai, Kiumars Babazadah, Gholamhossain Vahabzabeh, and Bijan Sadeghi. There is no guidebook, so foreign climbers will be largely reliant on locals—a good source of information is the “climbers’ cafe?” below the cliff.

The first international festival at Bisotoon took place in 2010. In October 2012, around 100 Iranian climbers hosted 52 foreign visitors, the vast majority French. (There is a long tradition of climbing here by the Groupe de Haute Montagne.) Australians, Danes, Germans, Italians, Slovenians, Swedes, and Swiss were also represented. Current economic sanctions, part of an effort to discourage Iran’s nuclear program, make obtaining a visa more or less impossible or those holding only U.K. or U.S. passports.

Several new lines were completed during the meet. Nineteen-year-old Se?bastien Bouin from France and 25-year-old Hassan Javadian (a former Iranian climbing champion) established but did not redpoint a five-pitch bolted line with a crux of 5.14b. They hope to finish it at a future date. Hassan Gerami and Hamid Safaghi, assisted by Amer Ezoji, Hossain Hizomker, and French guide Leslie Fucsko, completed the second part of Festival Route, which now has 12 bolted pitches up to 5.12c. The first part was climbed during the 2010 international festival—maybe they will complete it to the summit during the third? Slovenians Luka Lindic and Marko Prezelj, French Sam Beaugey and Emmanuel Pellisser, and Iranian mountain guide Hesam Karaji climbed Golden Spatula over two days. The 1,100m route to the top of the mountain was completed with trad gear only (6b). Several shorter new routes also were climbed.

Apart from the lack of beer, politics and religion had no impact on the event, and the response from participants was highly enthusiastic. There will likely be a third festival in October 2014. 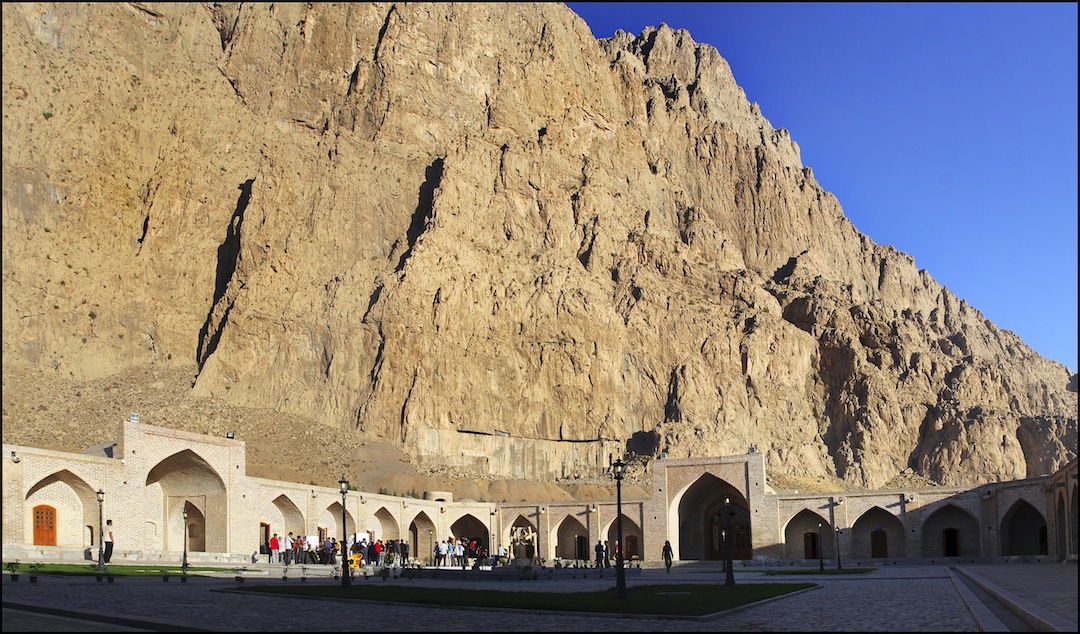 The southeast side of Bisotoon, a 1,200m limestone wall in Iran's Zagros Range.
Golriz Farmani

The southeast face of Bisotoon rises behind a caravanserai where participants in the second International Rock Climbing Festival were housed.
Golriz Farmani
Previous Next

The southeast side of Bisotoon, a 1,200m limestone wall in Iran's Zagros Range.
Golriz Farmani

The southeast face of Bisotoon rises behind a caravanserai where participants in the second International Rock Climbing Festival were housed.
Golriz Farmani
Previous Next