Florian Burg­er (Austria) and I left Huaraz on August 18 with a plan to climb the west face of Yerupaja in the Cordillera Huayhuash, but due to unpredictable conditions were forced to choose a different objective at the last moment, opting first for the Huandoys, and then Pisco.

We decided to attempt a 400m mixed wall on the far left end of the south face of Pisco (5,752m), believing it would provide an interesting challenge. We left camp at 4 a.m. The first pitch consisted of loose snow with a hard section involving a three-meter traverse on a vertical wall to reach a snowy channel. After a pitch of 60° snow, the third lead climbed hard 70-90° ice with a final section of loose snow, which took us up to a beautiful corridor between a series of snow mushrooms. The fourth pitch continued up this channel, first through deep, loose snow, then to a rock section (5c+) that was made difficult by the lack of available anchors. I managed to traverse to a small fissure where I could fix two nuts and belay my partner. The fifth pitch began with a 40m traverse over three crevasses with very loose snow—not particularly technical, but psychologically exhausting.

I belayed at a vertical wall of loose rock and ice. As Florian approached the belay, he told me that he had been hit on the head by a block of falling ice. I believed him to have a mild concussion. Only two pitches from the summit, we kept climbing, as the descent was more dangerous than upward escape. The sixth pitch was one of the most challenging, involving 40m of climbing on brittle ice that was as thin as 7cm in places. The lack of protection led us to rely on nuts of limited psychological value. The seventh and final pitch took us up a gully of loose snow to a series of overhanging, unprotectable snow mushrooms. Using our radios, we asked a porter on the west ridge to lower us a rope to help us ascend the final five meters (A1), which were excessively dangerous because of high temperatures. We reached the summit at 4:15 p.m., completing our route El Camino Secreto de Hermann Kirchner (340m, 5c+ 50-90° A1), and descended via the west ridge.

While there have been many ascents of Pisco’s south face, none have been documented well [AAJ 1984, 2003, 2005], so it’s unknown if our route is completely new. Some years ago a Mexican team completed an unreported route farther left. 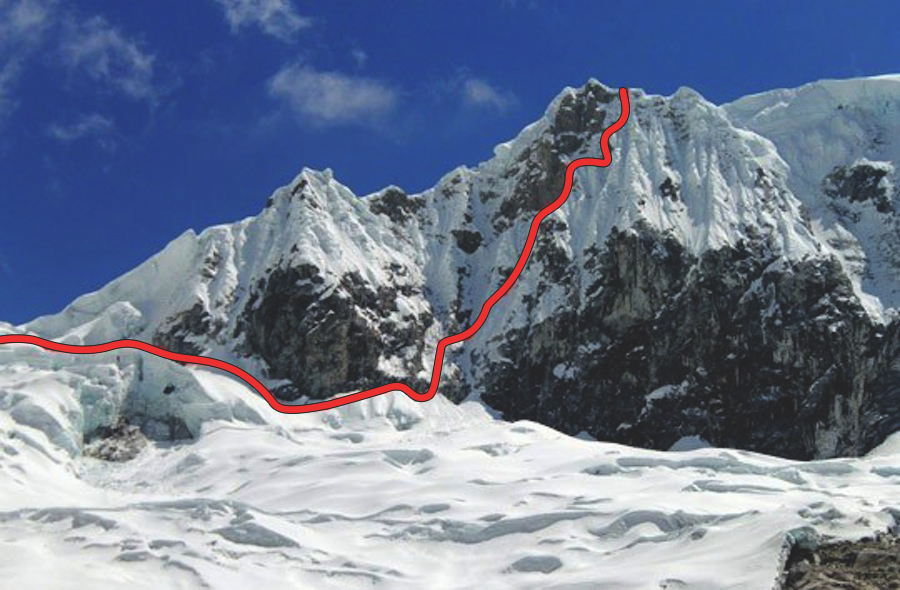