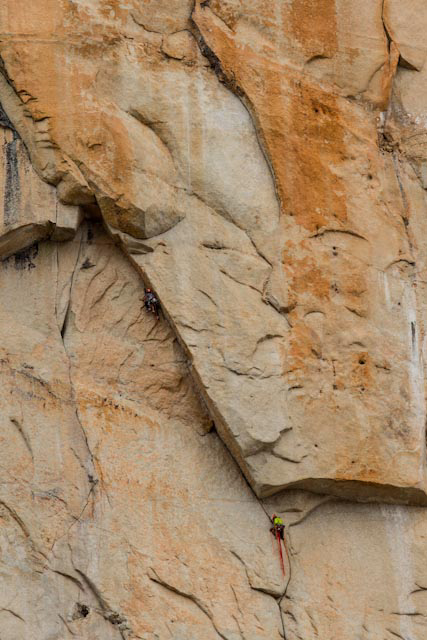 In winter of 2004, the Big Kangaroo wall was burned into my memory. The golden, sheer, 850’ face is not like any other wall in this area. The glacier-sculpted southern cirque had left a broad cathedral-like remnant—the central wall as the main prize. Until now, the plumb line contained only a history of ungratified desires and few attempts. The first 600’ consists of either vertical or overhanging rock guarded by crackless, monolithic granite, seams that lead to nowhere, and large roofs.

In August 2012, I rallied Mike Pond, Matt VanBein, David Elder, and Jon Schrock for an attempt. The complete ascent would take three days and multiple combinations from our group.

We established the first two pitches on day one. Mike led a fabulous splitter layback off the deck, and I competed a pitch involving tensioning and seven bolts to reach the main crack (A1), which we later freed at 5.11. On day two, Jon lead a heady pitch with bird beaks, hooks, and tipped-out cams to the base of the large roof system (175’, A2), which we coined the Kangaroofs. From here, Jon and I tried to pendulum right, but the cracks turned to seams, and we failed on that go.

On day three, Jon, Dave, and I pulled our ropes and started fresh with a clear vision of where the line needed to go; we saw no need for the drill above the roofs. Jon and I re-led pitches one through three to the high point. Dave took the fourth pitch, ascending a corner in the roof. With 400’ of air below him, he pulled two RPs and whipped into space but rallied to finish a brilliant lead (A2). I aided out the next roof (A2) only to blow a placement as well, fall past the belay, and core-shot the rope. At dusk, Dave and I finally finished the lower wall.

Above, the upper wall would break down to free climbing. The remaining cracks, dihedrals, and chimneys went slow but steady, and we topped out the wall at 2 a.m. on August 19. Not seeing a clear way off the summit, we spooned at an open bivy on coiled ropes at ca 8,300’ and descended the Beckey-Tate in the morning.

Our nine-pitch route, Walkabout (850’, IV 5.11 A2), was established ground-up. We used a mechanized drill on the first three pitches, leaving bolted anchors and seven protection bolts. After that, it’s natural gear to the top. For the climbers, it was questing in every sense of the term.