In early October, Steve Bosque, Ezra Allee, and I established an eight-pitch variation to Harding’s southwest face route on Liberty Cap. Bad Moon Rising (14 pitches, V 5.8 A2) begins 50’ to the right of the massive corner system that makes up the southwest face route, in a parallel system—equally impressive yet overlooked.

After an initial bolt ladder, the route follows these right-facing corners for half of the wall. Around halfway we tamed an intimidating roof via a friendly crack that cuts through the ceiling, followed by an airy belay over the lip. The following pitch was short but very steep, following a featureless corner. Unfortunately, what we’d hoped would continue to be usable features above this point turned out to be an illusion. Often, the corners on Liberty Cap look blank but actually take beaks and heads. However, these next pitches were different; we were at a crossroad.

We opted not to continue straight up, as it would have needed heavy manufacturing, which we were not into. Thankfully, while scoping, we’d noticed a horizontal crack that we could use to exit onto the Harding route. We placed our seventh belay at the start of the “Crack of God,” a splitter half-inch crack that shoots 100 feet dead left into the middle of the sixth pitch corner of the Harding route. This pitch was classic, ending with a natural belay on a perch.

The finishing pitches of the Harding route were adventurous, especially while hauling a massive kit. Six days were needed to complete the route, after fixing four pitches. We drilled and filled 35 holes (including one 3/8” bolt at each belay); we did not drill any bathooks, but rather used rivets and bolts for progression when necessary, as we care about the longevity of the route.

Did we free climb up there? Some, but this was 90 percent aid for us, due to the difficulty of the pitches. We have, however, had free climbing in mind while new-routing on Liberty Cap, as the lines are damn near built for classic free climbing. A 5.12 climber would absolutely eat up the huge corner: 800’ of 0.5”–1” cracks, mostly all clean on cams. It’s all there for the right suitor.

[Editor’s note: As of May 2013, Cedar Wright and Lucho Rivera had redpointed each pitch of the route, but it awaits a ground-up free ascent. Wright believes the route will be one of the best free climbs in Yosemite when completed.] 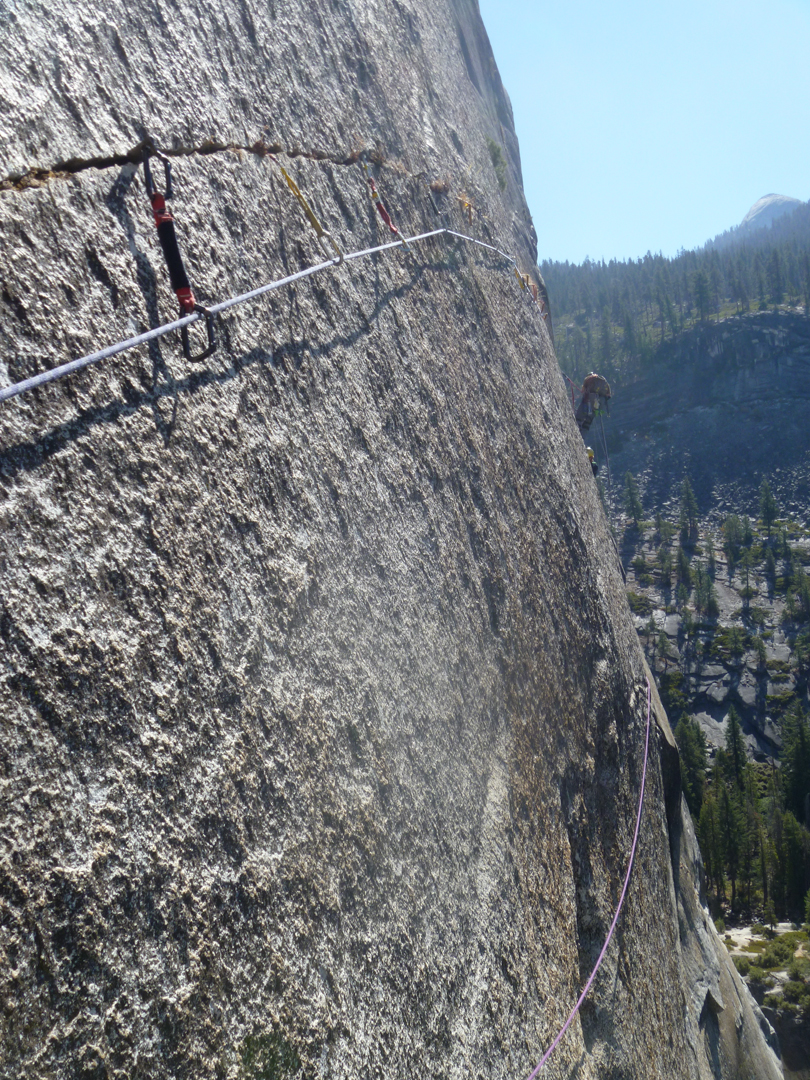 The Crack of God, a 100' horizontal splitter crack.
Josh Mucci 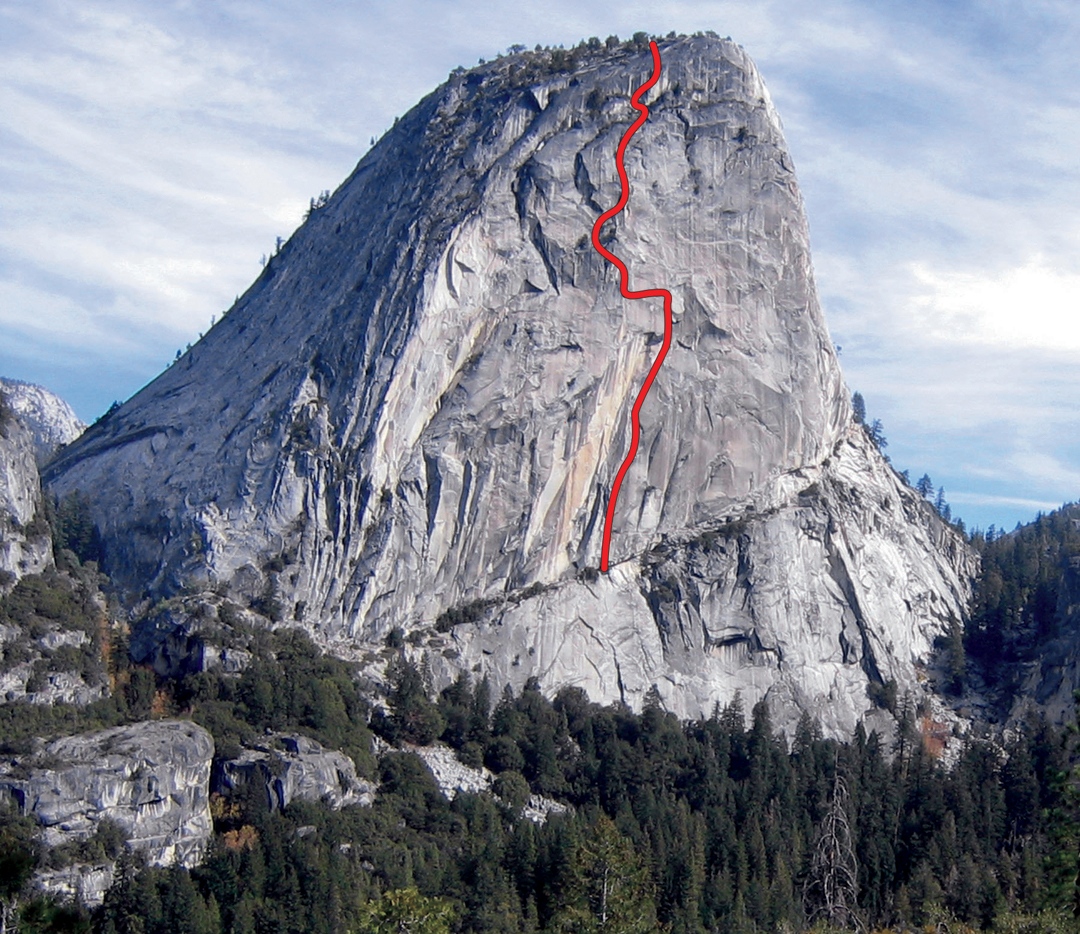 Bad Moon Rising on the southwest face of Liberty Cap. As of May 2013, Cedar Wright and Lucho Rivera had redpointed every pitch but not freed the route in a push.
Joe Hornof 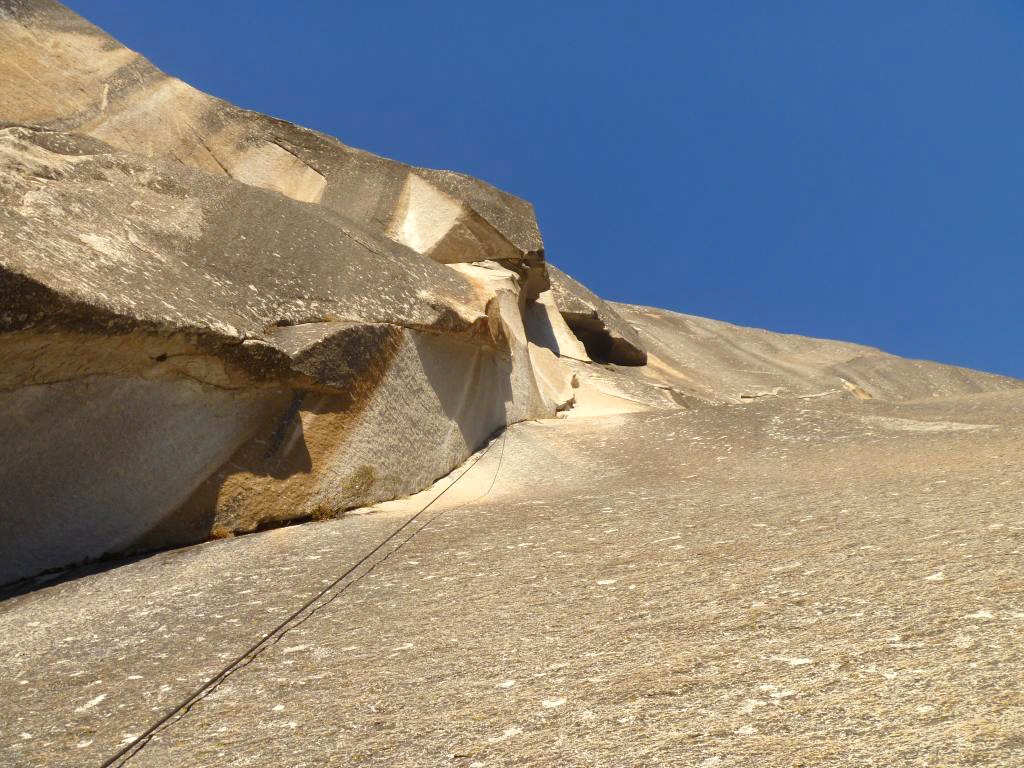 The Perigean Tide pitch, 190’ of tips.
Josh Mucci
Previous Next

The Crack of God, a 100' horizontal splitter crack.
Josh Mucci

Bad Moon Rising on the southwest face of Liberty Cap. As of May 2013, Cedar Wright and Lucho Rivera had redpointed every pitch but not freed the route in a push.
Joe Hornof

The Perigean Tide pitch, 190’ of tips.
Josh Mucci
Previous Next