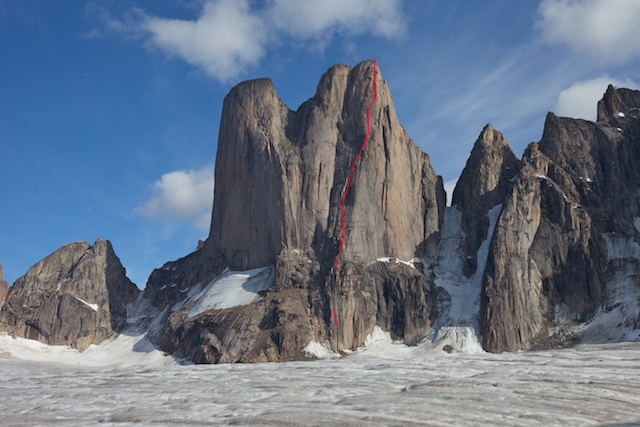 On the morning of July 17, Joshua Lavigne, Ines Papert, and I got off the plane in Pangnirtung. Three hours later we were cruising past icebergs in the fjord, propelled by our outfitter’s fishing boat. After three days of rugged trekking, frigid creek crossings, and tantalizing vistas of Weasel Valley’s huge granite walls, we arrived on the Turner Glacier, directly below the north face of Mt. Asgard. We spent another big day returning to the valley bottom to retrieve a cache of supplies and equipment that had been placed in the winter by snowmobile, which was followed by a much-needed rest day.

With great weather, we set out for the nearby south buttress of Mt. Loki, the second most beautiful peak in our vicinity. A continuous crack system led from glacier to summit, and we climbed it in 13 60m pitches (650m, 5.10+). Old rappel stations were encountered the whole way. We suspect we repeated the only route described in the guidebook, put up by Kiwi climbers some 20 years earlier. It was likely the second ascent and first free ascent, and was very similar in quality and length to the Bugaboos ultra-classic Beckey-Chouinard.

Following another rest day, we committed to our main objective, the unclimbed, 1,200m north face of Mt. Asgard’s south tower. With three days of food, fuel, and good weather forecasted, we started at the toe of the northwest prow and made good progress, leading in blocks of three to five pitches. After 12 pitches, we ditched our bags on a big ledge and began exploring options. We climbed two traversing pitches toward the west face, where we hoped to find access to a spectacular system of corners and face cracks, but to no avail. After reversing the traverse, we climbed two pitches of difficult wide cracks and fixed 75m of rope to speed things up the next day.

The next day, we ascended our lines and continued to the top, eventually wrapping around to the west face. Here, we found by far the best climbing of the trip. Although the stone quality had been excellent the whole way, it seemed to get better the higher we got. By 11 p.m., we all stood on the summit, shrouded in thick fog and precipitation. With previous knowledge of the descent route , we decided to rappell the south side of the mountain, hoping to escape before conditions worsened. After an involved descent in poor weather, we arrived back at camp 60 hours after we started.

All 29 pitches of our route Sensory Overload (1,200m, 5.11+ A1) were climbed free and onsight, except for a five-meter section of icy squeeze chimney. Had it been dry, it would have been a straightforward bit of 5.10. The other aid on the route was one wet move on the final pitch. Technically, the hardest climbing was 5.11+ (easier than we had expected) and this route would be a good candidate for a single-day, all-free attempt by a two-person team.